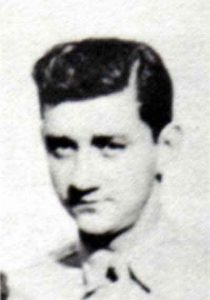 “According to War Department records, you have been designated as the emergency addressee of Private Walter B. Straka, 20, 700, 262, who, according to the latest information available, was serving in the  Philippine Islands at the time of the final surrender.

– Cabanatuan
– Straka came down with cerebral malaria and put into the camp
– POWs received half food rations hospital on June 18, 1942.
– in his own words, “The only thing different about it (being in the hospital) was that we didn’t have to work. But then are rations were cut
in half too. We knew about how many in the hospital and counted the rate they were dying. We had it figured out just about how long we
could live.”
– he suffered from malaria for a year and a half, he recalled, “When I went to sleep at night, I prayed that I would not wake up. Because if my religion, I could not kill myself, but there seemed no hope.”
– discharged from hospital – Monday – 1 February 1943
– 16 April 1943 – parents learned he was a POW
– hospitalized – Wednesday – 21 April 1943
– discharged – no date was given
– July 1944 – volunteered to be transported to Japan
– 15 July 1944
– 25 to 30 trucks arrived at camp to transport POWs to Manila
– POWs left at 8:00 P.M.
– July 1942 – His parents received a second message from the War Department. The following is an excerpt from it.

“The last report of casualties received by the War Department from the Philippines arrived early in the morning of May 6. Through this date, Private Walter B. Straka had not been reported as a casualty. The War Department will consider the persons serving in the Philippine Islands as “missing in action” from the date of the surrender of Corregidor, May 7, until definite information to the contrary is received.

“=MR F STRAKA: THE SECRETARY OF WAR HAS ASKED ME TO INFORM YOU THAT YOUR SON, PVT. WALTER B STRAKA WAS RETURNED TO MILITARY CONTROL SEPT 17 AND IS BEING RETURNED TO THE UNITED STATES WITHIN THE NEAR FUTURE HE WILL BE GIVEN THE OPPORTUNITY TO COMMUNICATE WITH YOU UPON HIS ARRIVAL IF HE HAS NOT ALREADY DONE SO=

“ACTING ADJUTANT GENERAL OF THE ARMY”

Transport:
– U.S.S. Marine Shark
– Sailed: 10 October 1945 – Manila
– Arrived: 22 October 1945 – Hawaii
– Sailed: 23 October 1945
– the ship broke down east of Hawaii and drifted for two days while repairs were made
– Arrived: 27 October 1945 – San Francisco, California
Hospitals:
– Letterman General Hospital – San Francisco, California
– sent telegram to mother – 2 November 1945
– Schick General Hospital – Clinton, Iowa
– learned his father had died in March 1945
Promoted: corporal
Promoted: sergeant
Discharged: November 1946 – Ft. Sheridan, Illinois
– still suffered from dysentery
– one of his biggest fears was that when he was got home e would have to tell the families of men who died how they died
Selective Service Registration:
– registered – 10 January 1947
– Contact Person: Mary Straka – mother
Medical Care:
– for a long while the military took blood from him
– years later he learned he was being checked for radiation poisoning
Married: Cleta Marie Sylvester
Children:
– 4 daughters, 3 sons
Walter Straka is the last surviving National Guard member of A Company and possibly the last living member of the 194th Tank Battalion