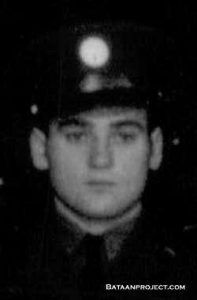 Pvt. August Bender
Born: 10 January 1920 – Yankton, South Dakota
Parents: Jacob Bender & Emelia Pfeifle-Bender
Siblings: 3 sisters, 4 brothers
Nickname: “Jeff”
Hometown: Yankton, South Dakota
Residence: Crow Wing County, Minnesota
– living with brother and sister-in-law
Occupation: worked on brother’s farm
Enlisted: Minnesota National Guard
Selective Service Registration: 16 October 1940
– He did not have to register since he was in the National Guard
Inducted:
– U. S. Army
– 10 February 1941 – Brainerd, Minnesota
– 82 men passed Army physicals
– the company remained at armory until 19 February 41
– left by train at 12:19 A.M. – 20 February 1941
– arrived at Fort Lewis with two tanks, one reconnaissance car, and six trucks
– A Company, 194th Tank Battalion
Training:
– Fort Lewis, Washington
– described as constantly raining during the winter
– many men ended up in the camp hospital with colds
– Typical Day – after they arrived at Ft. Lewis
– 6:00 A.M. – first call
– 6:30 A.M. – Breakfast
– During this time the soldiers made their cots, policed the grounds around the barracks, swept the floors of their barracks, and performed other duties.
– 7:30 A.M. to 11:30 A.M. – drill
– 11:30 A.M. – 1:00 P.M. – mess
– 1:00 P.M. – 4:30 P.M. – drill
– 5:00 P.M. – retreat
– 5:30 P.M. – mess
– men were free after this
– a canteen was located near their barracks and was visited often
– the movie theater on the base that they visited.
– The theater where the tanks were kept was not finished, but when it was, the tankers only had to cross the road to their tanks.
– Saturdays the men had off, and many rode a bus 15 miles northeast to Tacoma which was the largest town nearest to the base
– Sundays, many of the men went to church and services were held at different times for the different denominations
– later the members of the battalion received specific training
– many went to Ft. Knox, Kentucky for training in tank maintenance, radio operation, and other specific jobs
– assistant tank driver
– his tank crew included – James McComas, Joseph Bernardo, and Gerald Bell

Overseas Duty:
– rode a train to Ft. Mason, San Francisco, California
– Arrived: 7:30 A.M. – 6 September 1941
– ferried on, the U.S.A.T. General Frank M. Coxe, to Angel Island
– given physicals and inoculated by battalion’s medical detachment
– men with medical conditions replaced
– Ship: U.S.S. President Coolidge
– Boarded: Monday – 8 September 1941 – 3:00 P.M.
– Sailed: 9:00 P.M. – same day
– Arrived: Honolulu, Hawaii – Saturday – 13 September 1941 – 7:00 A.M.
– Sailed: 5:00 P.M. – same day
– escorted by the heavy cruiser, the U.S.S. Astoria, an unknown destroyer, and the U.S.S. Guadalupe a replenishment oiler
– heavy cruiser intercepted several ships after smoke was seen on the horizon
– ships belonged to friendly countries
– Arrived: Manila – Friday – 26 September 1941
– disembark ship – 3:00 P.M.
– taken by bus to Fort Stotsenburg
Philippines
Stationed:
– Ft. Stotsenburg
– lived in tents upon arriving
– 15 November 1941 – moved into barracks
– the barracks walls were open and screened three feet from the bottom
– above that, the walls were woven bamboo that allowed the air to pass through
– washing – the lucky man washed by a faucet with running water
Work Day:
– 7:00 to 11:30 A.M. and from 1:30 to 2:30 P.M.
Recreation:
– the soldiers spent their free time bowling, going to the movies,
– they also played horseshoes, softball, badminton, or threw a football around
– on Wednesday afternoons, they went swimming
– they also went to Mt. Aarayat National Park and swam in the swimming pool there that was filled with mountain water
– men were allowed to go to Manila in small groups
– they also went to canoeing at Pagsanjan Falls in their swimsuits
– the country was described as being beautiful
– 1 December 1941
– tanks ordered to the perimeter of Clark Field
– 194th guarded the north end of the airfield and the 192nd guarded the south end
– two crew members of each tank and half-track remained with the vehicles at all times
– meals served by food trucks
– those not assigned to a tank or half-track remained at the command post
Engagements:
– Battle of Luzon – 8 December 1941 – 6 January 1942
– 8 December 1941
– lived Japanese attack on Clark Field
– planes did not go after tanks
– after attack 194th sent to a bivouac three kilometers north of Clark Field
– from there they were sent to Barrio of San Joaquin on the Malolos Road
– 12 December 1941
– moved to new bivouac south to San Fernando near Calumpit Bridge
– arrived at 6:00 A.M.
– 15 December 1941
– received 15 Bren gun carriers
– turned some over to 26th Cavalry, Philippine Scouts
– 22 December 1941
– sent to Rosario
– west and north of the barrio
– ordered out of the 71st Division Commander
– said they would hinder the cavalry’s operation
– 22/23 December 1941
– operating north of Agno River
– main bridge at Carmen bombed
– 24/25 December 1941
– tank battalions make an end run to get south of Agno River
– tanks ordered to withdraw
– 1st Lt. Harold Costigan informed the tankers they were behind enemy lines and would have to fight their way out
– tanks ran into resistance at Carmen
– lost two tanks but the crews were recovered
– ran into Japanese resistance but successfully crossed the river
– 26 December 1941 – west of Carmen along Agno River
– tanks were under heavy artillery and mortar fire
– tanks held the line so the infantry could withdraw
Killed in Action:
– Friday – 26 December 1941
– Agno bridge area – tanks held bridge so withdrawing forces could cross
– killed defending
– August and Gerald Bell were in a foxhole with a machine gun holding off the Japanese
– Japanese surrounded August and Gerald Bell and machined gunned them to death
– in May 1942, his family received a message from the War Department

“According to War Department records, you have been designated as the emergency addressee of Privates August Bender, 20, 700, 217, who, according to the latest information available, was serving in the  Philippine Islands at the time of the final surrender.

“The last report of casualties received by the War Department from the Philippines arrived early in the morning of May 6. Through this date, Private August Bender had not been reported as a casualty. The War Department will consider the persons serving in the Philippine Islands as “missing in action” from the date of the surrender of Corregidor, May 7, until definite information to the contrary is received.

– his family received another message from the War Department in 1943

– 8 September 1945 -family learned he had been killed in action