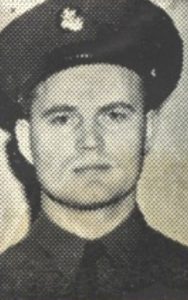 “Dear Mom and Dad and all;

“Things have been really popping this past month and that is for sure. We have been all over this darned island scrapping with these cussed little Japs. I presume you are more than worried about me even as I am considerably concerned about your welfare and health and all. So far I have been fortunate. I have placed my complete faith in God and I know in my heart that nothing on this earth can guarantee me safety.

“I have read my New Testament constantly and have found some wonderful promises there and some wonderful examples of other people before me that have had to endure as difficult time as we are now experiencing and God helped them. I am not positive, but I think I have seen a few signs that must have been from Him and I know He must be with me because I am never as worried in a situation now as I was when the war first started.

“It would be useless and foolish to try to tell you here of our experiences as we will be censored so we will dwell upon the nicer things as connected with this business.

“Naturally, there has been a great deal of destruction and we have been greatly outnumbered. Nevertheless, we have received many compliments from the higher authority upon our work and I know with some white troops to assist and work with the Philipinos we will be able to rid this Island of the pests from Japan. We are in a rest-camp now and it is a much-appreciated rest. We have plenty to eat, a good place to bathe and are now getting plenty of sleep. We have been very fortunate thus far. We had ___ ___ ___ and there have been a few injuries. No deaths in our company as yet – among the enlisted men, with one possible exception which we are not sure of. Our greatest loss which you probably know about was the death of Captain Walter Write. He was most important to us and I am sure that his presence throughout the past month would have given us an entirely different picture of this campaign. We also lost a fine ___ ___ ___. But the rumor is he was picked up by medics and now has been evacuated to Australia. God willing I hope this is true for he was a wonderful individual. I cabled you shortly after the war began! I hope you received it.

“Hubbard, Durner, Ken Hatlevig, and Kubly are well. Trebs was in the hospital for a while with some shrapnel in his leg but should be out by now.

“The Jap planes are pretty active today but I expect they will hum a different tune when the U. S. starts marching the other way.

“I always wonder if God would make me undergo some great trial for my sins and determining my worth to his Kingdom. I hope and pray with all my heart he shall not find me lacking in any respect. I read the 23rd Psalm, the 91st Psalm a lot and also the 14th chapter of John. I have found so many comforting things there and am really beginning to find out how little I knew about some of the things in my Testament.

“I sincerely hope this finds you all well. This is a big job of course but at a time like this no one must shirk responsibility and everyone must do their best to get this thing over with and help make this a pleasant world.

“May God bless you all and keep you constantly under His care. Someday, somewhere we will be together again and may God bless the day and grant that wherever it may be that it shall be to His glory. With all my love and best wishes forever.

“Dear Mom and Dad and all,

“How is everything back in America’s fairyland, I mean dairy-land? I’ll bet you had begun to think for sure that I had forgotten all about you. The truth of the matter is that we had been just a little bit too busy taking care of these little yellow devils from across the ocean.

“I figure that before this thing is over though they will begin to think they have more than just a little bit to take care of. We have already taken care of a lot of them and with the Philippines really begin to click and now the … we need, I believe we can blow the whistle most anytime and we will start a touchdown march that will make the Japs look like termites in reverse.

“I have quite a bit of film and have taken a few pictures of our fellows and the scenery around; just the nicer things, because there are really a lot of nice things to see around here; the mountains the sun shining on them, the moonlight and ocean all go together to make up some of the most beautiful scenery I have ever seen.

“I have written you on several occasions and I certainly hope you have received the letters so you will not be too much concerned or worried for my safety. They have sent in a request for my promotion to Second Lt., but it has not come through.

“We have been eating and living pretty well. Food is limited but we have enough to keep us going fairly well. Cigarettes are scarce as heck but we even get few of those occasionally. We have seen a lot of action and have been in a lot of close situations but God has smiled favorably in our direction because we’re still a-kicking. I thank him often for the grace that has accompanied me in this whole life.

“I am in the rear echelon right now but am in reserve capacity to assist in any operation where I might be needed. Herb Durner is with me. I have seen Robert Hubbard a few times. He has been bothered with some kind of infection on his hands and arms but seems to be getting along quite well. Each day we hope for assistance from the states and have complete faith that it will soon come.

“Is everyone well? I wish I could hear from you, a letter or wire or anything. Do you still have my car? I hope so. If not though it is O.K. That is not very important to me now. I pray for your good health and for faith to carry us through the experience. Someday we shall be together again and that will be an experience to be thankful for.

“There is not a great deal to say or attempt to say except that we are still well. We live in the woods and have learned the numerous ways of preparing beds and all types of things for protection. Have faith. Pray for me as I pray for you and I know that he will take care of us. Should be time to eat soon. I have made an allotment to the bank. If you should need the money I want you to feel welcome to use it in any way.

“Please write and tell me about all the folks, those at the store, and our relatives and friends. I presume mail is very difficult to get through. Anyway, Bye now and God bless you all. 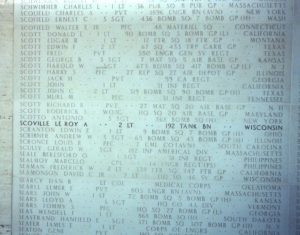