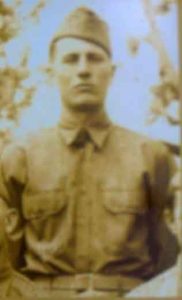 Pvt. Quincey Albert Humphries was born on January 23, 1917, in LeFlore County, Oklahoma, to Samuel G. Humphries & Lillie Goodins-Humphries, and was known as “Jim” to his family and friends. With his five brothers and six sisters, he grew up on Sugarloaf Mountain near Monroe, Oklahoma. As a child, he would travel to town by horse and wagon. He finished grade school and worked as a farmhand.

Quincey was inducted in the U. S. Army on March 3, 1941, in Oklahoma City. During his time at Ft. Knox, Quincey trained as a tank driver. After basic training, he was sent to Camp Polk, Louisiana and assigned to the 753rd Tank Battalion. The 753rd did not take part in the Louisiana Maneuvers which were taking place at that time.

The 192nd Tank Battalion, which did take part in the maneuvers, was informed that it was being sent overseas. Since the battalion was made up of National Guardsmen from the Midwest, those men who were 29 years old or married, were given the opportunity to resign from federal service. In need of replacements, the army sought volunteers from the 753rd Tank Battalion. Quincey volunteered or had his name drawn to join the 192nd Tank Battalion or had his name drawn, at Camp Polk and was assigned to B Company.

The decision for this move – which had been made during August 1941 – was the result of an event that took place in the summer of 1941. A squadron of American fighters was flying over Lingayen Gulf, in the Philippines, when one of the pilots, who was flying at a lower altitude, noticed something odd. He took his plane down and identified a flagged buoy in the water and saw another in the distance. He came upon more buoys that lined up, in a straight line for 30 miles to the northwest, in the direction of a Japanese occupied island which was hundreds of miles away. The island had a large radio transmitter. The squadron continued its flight plan south to Mariveles and returned to Clark Field. When the planes landed, it was too late to do anything that day.

Many of the members of the battalion were given furloughs home so that they could say goodbye to family and friends. They returned to Camp Polk and traveled by train to San Francisco, California. From San Francisco, the tankers were ferried, on the U.S.A.T. General Frank M. Coxe, to Ft. McDowell on Angel Island. On the island, they were given physicals and inoculated for tropical diseases. Some men were held back for health issues but scheduled to join the battalion at a later date. Others were simply replaced with other soldiers.

The 192nd boarded onto the U.S.A.T. Gen. Hugh L. Scott and sailed on Monday, October 27. During this part of the trip, many tankers had seasickness, but once they recovered they spent much of the time training in breaking down machine guns, cleaning weapons, and doing KP. The ship arrived at Honolulu, Hawaii, on Sunday, November 2 and had a two-day layover, so the soldiers were given shore leave so they could see the island.

On Wednesday, November 5, the ship sailed for Guam but took a southerly route away from the main shipping lanes. It was at this time it was joined by, the heavy cruiser, the U.S.S. Louisville and, another transport, the S.S. President Calvin Coolidge. Sunday night, November 9, the soldiers went to bed and when they awoke the next morning, it was Tuesday, November 11. During the night, while they slept, the ships had crossed the International Dateline. On Saturday, November 15, smoke from an unknown ship was seen on the horizon. The

Louisville revved up its engines, its bow came out of the water, and it shot off in the direction of the smoke. It turned out the smoke was from a ship that belonged to a friendly country.

When they arrived at Guam on Sunday, November 16, the ships took on water, bananas, coconuts, and vegetables before sailing for Manila the next day. At one point, the ships passed an island at night and did so in total blackout. This for many of the soldiers was a sign that they were being sent into harm’s way. The ships entered Manila Bay, at 8:00 A.M., on Thursday, November 20, and docked at Pier 7 later that morning. At 3:00 P.M., most of the soldiers were taken by bus to Ft. Stotsenburg. Those who drove trucks drove them to the fort, while the maintenance section remained behind at the pier to unload the tanks.

At the fort, the tankers were met by Gen. Edward P. King, who welcomed them and made sure that they had what they needed. He also was apologetic that there were no barracks for the tankers and that they had to live in tents, but the fact was he learned of their arrival just days before they arrived. He stayed with the battalion until they had received their Thanksgiving Dinner, which was a stew thrown into their mess kits. Afterward, he went for his own dinner.

For the next seventeen days, the tankers spent much of their time removing cosmoline from their weapons. They also spent a large amount of time loading ammunition belts. The plan was for them, with the 194th Tank Battalion, to take part in maneuvers. Quincey became a member of the tank crew of S/Sgt Walter Mahr, Sgt. Ray Mason, and Pvt. LD Marrs. The morning of December 8, the officers of the battalions met and were informed of the Japanese attack on Pearl Harbor hours earlier. The 192nd letter companies were ordered to the perimeter of Clark Airfield.

All morning long, the sky was filled with American planes. At noon, all the planes landed and the pilots went to lunch. At 12:45, planes approached the airfield from the north. The tankers on duty at the airfield counted 54 planes. When bombs began exploding, the men knew the planes were Japanese. After the attack, the 192nd remained at Ft. Stotsenburg for almost two weeks. They were then sent to the Lingayen Gulf area where the Japanese had landed.

Quincey, with his tank crew, was present at Clark Field when the Japanese attacked the airfield ten hours after the attack on Pearl Harbor. He and the other members of the tank battalion watched helplessly as the Japanese Zeros destroyed the Army Air Corps.

The tank battalion received orders on December 21 that it was to proceed north to Lingayen Gulf. Because of logistics problems, the B and C Companies soon ran low on gas. When they reached Rosario, there was only enough for one tank platoon, from B Company, to proceed north to support the 26th Cavalry.

On December 23 and 24, the battalion was in the area of Urdaneta. The bridge they were going used to cross the Agno River was destroyed and the tankers made an end run to get south of the river. As they did this, they ran into Japanese resistance early in the evening. They successfully crossed at the river in the Bayambang Province.

It was during an engagement on December 29, at Tarlec, that Quincey’s tank was knocked out by the Japanese when its track hit a landmine causing it to lose its tread. Quincey, Mahr, Marrs, and Mason were ordered out of the tank by the Japanese. They left the tank believing they would be taken Prisoners Of War. Instead, they were ordered to run.

The four men ran toward their lines when the Japanese opened fire on them. Sgt. Ray Mason was killed instantly, while S/Sgt. Mahr, Pvt. Marrs and Quincey were wounded. The three men made it to a sugarcane field and hid. The next day, S/Sgt. Mahr was found in the sugarcane field by American troops and taken to a field hospital. Despite a search of the field, Quincey and Marrs were not found. The two soldiers had been captured by the Japanese, and Quincey most likely died of his wounds after being captured.

Pvt. Quincey Albert Humphries was reported Missing In Action at Tarlec on Monday, December 29, 1941, and presumed dead. After the war, he was declared dead by the U. S. Army on February 1, 1946.

Quincey’s family later had a memorial for him dedicated at Vaughn Cemetery in Gilmore, Oklahoma. He is also memorialized at the American Military Cemetery at Manila. In addition, on March 7, 1996, a memorial with Quincey’s name on it was dedicated at Fort Smith National Cemetery in Ft. Smith, Arkansas.

After the war, Quincey’s parents received a Purple Heart from the Army. According to the family, his mother looked at it and put it on a shelf. She never looked at the medal again.