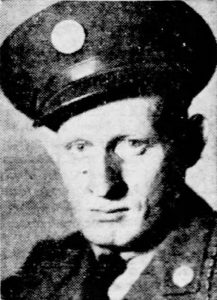 It was at this time the tank battalions received these orders which came from Gen. Weaver: “Tanks will execute maximum delay, staying in position and firing at visible enemy until further delay will jeopardize withdrawal. If a tank is immobilized, it will be fought until the close approach of the enemy, then destroyed; the crew previously taking positions outside and continuing to fight with the salvaged and personal weapons. Considerations of personal safety and expediency will not interfere with accomplishing the greatest possible delay.”

“According to War Department records, you have been designated as the emergency addressee of Private First Class Robert C. Kubly, 20,645,206, who, according to the latest information available, was serving in the  Philippine Islands at the time of the final surrender.

In July 1942, the family received a second letter. The following is an excerpt from it.

“The last report of casualties received by the War Department from the Philippines arrived early in the morning of May 6. Through this date, PFC Robert C. Kubly had not been reported as a casualty. The War Department will consider the persons serving in the Philippine Islands as “missing in action” from the date of the surrender of Corregidor, May 7, until definite information to the contrary is received. “Efforts to secure prisoner of war lists from the Philippines have not been successful to this date due to the lack of communication and the fact that the Japanese Government has not yet given permission for the Swiss representative and the International Red Cross delegates to make visits to prisoner of war camps in the islands. When the lists of prisoners are received, we will clear the name of your son and send you any additional information that we may have.”

– 11 July 1943 – a POW named Conley escaped
– 11:00 PM, POWs heard a lot of noise
– the next morning the POWs saw his body in the camp morgue
– Conley’s jaw had been crushed as was the top of his skull, his teeth had all been knocked out
– his left leg had been crushed
– he had been bayoneted in the eyes and scrotum
– July 1943 – 500 names posted
– 22 July 1943 – the POWs were issued new shoes, a suit of “Philippine Blues”
– also received – 2 cans of corn beef and 3 cans of milk
– informed they would be taking a 21-day trip
– the detachment left the camp that night
– when they arrived in Manila, they were used in the Japanese propaganda film The Dawn of Freedom
– film supposedly showed how Americans mistreated the Filipinos
– POWS sent to Port Area of Manila and boarded onto the Clyde Maru
– selected for transfer to Japan – September 1943
– sent to Bilibid Prison
Hell Ship:
– Taga Maru – ship was also known as Coral Maru
– Sailed: Manila – 20 September 1943
– Arrived: Takao, Formosa – 23 September 1943
– Sailed: Takao – 26 September 1943
– Arrived: Moji, Japan – 5 October 1943
POW Camp:
– Japan:
– Sakurajima
– Work: Osaka Iron Works
– the camp was destroyed in the air raid
– Nagoya #9
– 29 May 1945 – 5 September 1945
– Work: Stevedores Iwase docks
– Camp had a ten-foot fence around it
– Work:
– POWs worked as stevedores on docks loading and unloading ships
– the workday went from 7:00 A.M.to 6:30 P.M.
– 1 hour for lunch and two half-hour breaks
– when docks were busy, 100 POWs returned at 8:00 P.M. and worked to midnight or 4:00 A.M.
– 100 POWs worked in the camp garden
– Barracks:
– 100 feet long by 24 feet wide
– two tiers of platforms around the perimeter for sleeping
– POWs slept on straw mats
– an eight-foot-wide aisle down the middle of barracks
– floors were dirt
– Meals:
– six POWs assigned to the kitchen
– primarily rice, wheat, and soybeans
– sometimes vegetables like onions or daikons a Japanese beet
– fish that was fried or in a soup
– Clothing:
– provided by the Japanese Army
– many POWs wore Japanese Army uniforms and the traditional Japanese shoe, the geta
– those who still had GI shoes were given leather to repair them
– Work Clothes: straw shoes, hats, raincoats that were used at work
– Work:
– most of the POWs walked three-quarters of a mile and worked on the docks loading and unloading coal, rice, and beans
– worked from 7:30 A.M. until 6:30 P.M.
– received an hour lunch and two half-hour breaks
– when the port was extremely busy, 100 POWs worked from 8:00 P.M. until midnight or 4:00 A.M.
– Punishment:
– collective punishment practiced toward the POWs
– usually involved stealing rice or beans at docks
– on occasion, the POWs were denied coal, during the winter, for 7 days because one POW broke a rule
– on another occasion, 15 POWs were accused of stealing rice from sacks they were unloading from a ship
– when they returned to camp, they were forced to kneel for 1½ to 5 hours to get them to confess
– six of the fifteen men confessed and the remainder were fed and sent to the barracks
– when the camp commandant left at 8:00 P.M. the men sent to their barracks were called outside
– they were ordered to stand at attention and were beaten with pickax handles, rope, that was about 3 inches round and 5 feet long, clubs, and farrison
belts across their buttocks, faces, and legs
– one POW said he was hit 150 times on his face and 20 times on his buttocks
– POWs often were kicked with hobnailed boots
– POWs who passed out were thrown into a large tub of water – with their hands and feet
bound – or they had water poured on them to revive them
– when they were revived, they were beaten again
– Red Cross Boxes:
– the Japanese misappropriated the canned meats, canned fruits, cigarettes, medicine, and medical supplies
– also used Red Cross clothing and shoes
– Hospital:
– 42-foot long by 24-foot wide area at the end of barracks was walled off to create one
– had beds for 20 patients
– on average 100 POWs were sick each day
– American doctor, four American medics, and a Japanese medical technician
– the American doctor was a dentist
– pneumonia killed many POWs
– men suffering from dysentery and diarrhea not considered ill and had to work
– beaten with shovels to get them to work
– meal rations cut
– 16 August 1945 – all medical records destroyed
– Burials:
– bodies put in a 4 foot square by two-foot-tall wooden box with handles
– carried to crematorium behind a Buddhist priest, wearing white and gold robes, from the
local village
– ashes returned to camp in 4-inch square by 12-inch high wooden box
– man’s name and serial number on the box
– given to camp commandant who kept it in his office
– POWs were working when they heard the word that the war was over
– they knew it was true from the looks on the faces of the Japanese
– 5 September 1945 – Swiss Red Cross enter the camp
– 9 September 1945 – liberated
– made contact with American troops
– taken by train to Tokyo docks for processing and medical exams on U.S.S. Rescue
– returned to the Philippines
– His parents received a telegram from the War Department:

“Mr. & Mrs. Kubly: The secretary of war has asked me to inform you that your son, PFC Robert C. Kubly was returned to military control Sept. 4 and is being returned to the United States within the near future. He will be given the opportunity to communicate with you upon his arrival if he has not already done so.