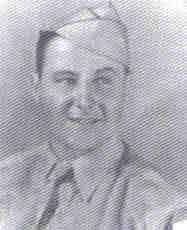 Cpl. Frank I. Muther
Born: 22 January 1920 – Oakland, California
Parents: Josef Muther & Frieda Wifli-Muther
Siblings: 1 sister, 1 step-brother
– the family had a dairy farm near Puyallup, Washington
– his family bought a dairy farm near Salinas, California
Home: Monterey Road – Alisal, California
Education:
– Blanco School
– Salinas High School
– Class of 1938
– Hartnell College
Enlisted: California National Guard
Selective Service Registration: 16 October 1940
– he did not have to register since he was a member of the National Guard
Inducted:
– U. S. Army
– 10 February 1941 – Salinas Army Air Base
– C Company, 194th Tank Battalion
Training:
– Fort Lewis, Washington
– described as constantly raining during the winter
– many men ended up in the camp hospital with colds
– Typical Day – after they arrived at Ft. Lewis
– 6:00 A.M. – first call
– 6:30 A.M. – Breakfast
– During this time the soldiers made their cots, policed the grounds around the barracks, swept the floors of their barracks, and performed other duties.
– 7:30 A.M. to 11:30 A.M. – drill
– 11:30 A.M. – 1:00 P.M. – mess
– 1:00 P.M. – 4:30 P.M. – drill
– 5:00 P.M. – retreat
– 5:30 P.M. – mess
– men were free after this
– a canteen was located near their barracks and was visited often
– the movie theater on the base that they visited.
– The theater where the tanks were kept was not finished, but when it was, the tankers only had to cross the road to their tanks.
– Saturdays the men had off, and many rode a bus 15 miles northeast to Tacoma which was the largest town nearest to the base
– Sundays, many of the men went to church and services were held at different times for the different denominations
– later the members of the battalion received specific training
– many went to Ft. Knox, Kentucky for training in tank maintenance, radio operation, and other specific jobs
– Fort Knox, Kentucky
– Radio Operator
– Tank Crew:
– Lt. Ray Bradford
– Pfc. Gene Stahl
– the fourth member of the tank crew was referred to as “L”

Note: The decision for this move – which had been made on August 15, 1941, at Ft. Knox, Kentucky – was the result of an event that took place in the summer of 1941. A squadron of American fighters was flying over Lingayen Gulf, in the Philippines, when one of the pilots, who was flying at a lower altitude, noticed something odd. He took his plane down and identified a flagged buoy in the water and saw another in the distance. He came upon more buoys that lined up, in a straight line for 30 miles to the northwest, in the direction of a Japanese occupied island which was hundreds of miles away. The island had a large radio transmitter. The squadron continued its flight plan south to Mariveles and returned to Clark Field.

Note: It was the evening of April 8 that Gen. Edward P. King decided that further resistance was futile, since approximately 25% of his men were healthy enough to fight, and he estimated they would last one more day. In addition, he had over 6,000 troops who sick or wounded and 40,000 civilians who he feared would be massacred. The other problem facing King was his men were on one-quarter ration per man and even at that ration, he only had two days of food left. The ammunition dumps were blown up at 11:40 P.M.

At 2:oo A.M. April 9, Gen. King sent a jeep under a white flag carrying Colonel Everett C. Williams, Col. James V. Collier and Major Marshall Hurt to meet with the Japanese commander about terms of surrender. Shortly after daylight Collier and Hunt returned with word of the appointment. The tank battalion commanders received this order on April 8: “You will make plans, to be communicated to company commanders only, and be prepared to destroy within one hour after receipt by radio, or other means, of the word ‘CRASH’, all tanks and combat vehicles, arms, ammunition, gas, and radios: reserving sufficient trucks to close to rear echelons as soon as accomplished.”

The tankers circled the tanks and fired an armor-piercing shell into the engine of each tank. Next, they opened the gasoline cocks inside the crew compartments and dropped hand grenades into each one.