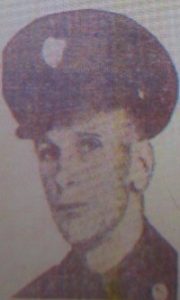 Pvt. James T. McLeod
Born: 1919 – California
Parents: Dorothy H. & George W. McLeod
Nickname: Jim
Siblings: 3 sisters
Home: 134 West Gabilan Street – Salinas, California
Occupation: Truck Driver
Enlisted:
– California National Guard
Inducted:
– U.S. Army
– 10 February 1941 – Salinas Army Airfield
Training:
– Fort Lewis, Washington
– C Company, 194th Tank Battalion
Note: The decision for this move – which had been made on August 15, 1941 – was the result of an event that took place in the summer of 1941. A squadron of American fighters was flying over Lingayen Gulf, in the Philippines, when one of the pilots, who was flying at a lower altitude, noticed something odd. He took his plane down and identified a flagged buoy in the water and saw another in the distance. He came upon more buoys that lined up, in a straight line for 30 miles to the northwest, in the direction of a Japanese occupied island which was hundreds of miles away. The island had a large radio transmitter. The squadron continued its flight plan south to Mariveles and returned to Clark Field. When the planes landed, it was too late to do anything that day.
The next day, when another squadron was sent to the area, the buoys had been picked up by a fishing boat – with a tarp on its deck – which was seen making its way to shore. Since communication between the Air Corps and Navy was difficult, the boat escaped. It was at that time the decision was made to build up the American military presence in the Philippines.
Overseas Duty:
– rode a train to Ft. Mason, San Francisco, California
– Arrived: 7:30 A.M. – 6 September 1941
– ferried on U.S.A.T. General Frank M. Coxe to Angel Island
– given physicals and inoculated by battalion’s medical detachment
– men with medical conditions replaced
– Ship: S.S. President Calvin Coolidge
– Boarded: Monday – 8 September 1941 – 3:00 P.M.
– Sailed: 9:00 P.M. – same day
– Arrived: Honolulu, Hawaii – Saturday – 13 September 1941 – 7:00 A.M.
– Sailed: 5:00 P.M. – same day
– escorted by the heavy cruiser, U.S.S. Astoria, and an unknown destroyer
– smoke was seen on the horizon several times
– cruiser intercepted ships
– Arrived: Manila – Friday – 26 September 1941
– disembark ship – 3:00 P.M.
– taken by bus to Fort Stotsenburg
– maintenance section with 17th ordnance remained behind to unload the tanks and attached
turrets
-27 September 1941 – job completed at 9:00 A.M.
– Stationed:
– Ft. Stotsenburg, Philippine Islands
– lived in tents until barracks completed – 15 November 1941
– 1 December 1941
– tanks ordered to the perimeter of Clark Field
– 194th guarded north end of the airfield with 192nd guarding south portion
– two crew members of each tank and half-track remained with the vehicles at all times
– meals served by food trucks
– those not assigned to a tank or half-track remained at the command post
Engagements:
– Battle of Luzon
– 8 December 1941
– lived Japanese attack on Clark Field
– planes did not go after tanks
– after attack 194th sent to a bivouac three kilometers north of Clark Field
– from there they were sent to Barrio of San Joaquin on the Malolos Road
– 12 December 1941
– moved to new bivouac south to San Fernando near Calumpit Bridge
– arrived at 6:00 A.M.
– C Company ordered to Southern Luzon
– 15 December 1941
– C Company holding Tagaytay Bridge – South Luzon
– spent most of the time chasing down Fifth Columnists
– 24 December 1941
– the company moved over Taal Road to Santo Tomas
– bivouacked near San Paolo
– 25 December 1941
– sent to assist in operations around Lucena, Pagbilao, and Lucban
Killed in Action:
– Friday – 26 December 1941 – Lucban, Philippine Islands
– tank hit by fire from enemy .47 millimeter gun
Note: On July 5, 1945, a Remains Recovery Team was sent to the barrio of Piis. While there, the villagers told them that the remains of two tank crew members were still in a tank. The recovery team found partial remains of the driver and assistant driver. The villagers stated they had filled the tank with dirt. They also stated that dogs and other animals carried off the remains of the other tank crew members. The remains of one man were designated X-3677. The other remains were designated X-4702. In addition, the number of the tank was identified FXN-314.
Note: Parents received his Purple Heart – 27 April 1943
Memorial:
– Tablets of the Missing – American Military Cemetery – Manila, Philippine Islands
– remains of were left in the tank and covered with dirt
– later buried in a cemetery in Batangas
– after the war, the remains were buried in a grave as “Unknown.”