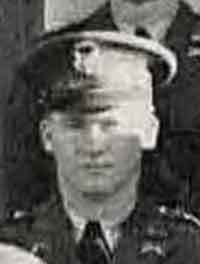 What is known about 2nd Lt. Robert Forrest Needham was that he was born on October 8, 1916, to James F. Needham & Maude L. Jones-Needham. With his two brothers, he grew up in Hanford, Washington. He attended Washington State University and was a member of the Army ROTC program. After college, Robert was an adding machine salesman. With his wife, Patricia, he lived at 1530 West Dean Avenue, Spokane, Washington. When he was inducted, he entered the army as a second lieutenant. He was assigned to C Company, 194th Tank Battalion as it prepared to leave Fort Lewis, Washington.

Just before he joined the battalion, Major Ernest Miller was ordered to Ft. Knox and got there by plane. There he received that battalion’s orders. On August 18, Miller stopped in Brainerd to see his family. When asked, he informed the Brainerd Daily Dispatch that the battalion was being sent overseas, but he did not disclose where they were being sent. He later flew to Minneapolis and then flew to Ft. Lewis. Different newspapers speculated that the battalion was being sent to the Philippines. The fact there were only three “overseas” locations the tanks could be sent which were Alaska, Hawaii, or the Philippines.

The reality was that the battalion was part of the First Tank Group which was headquartered at Ft. Knox and operational by June 1941. Available information suggests that the tank group had been selected to be sent to the Philippines early in 1941. Besides the 194th at Ft. Lewis, the group was made up of the 70th and 191st Tank Battalions – the 191st was a National Guard medium tank battalion while the 70th was regular Army – at Ft. Meade, Maryland, the 193rd at Ft. Benning, Georgia, and the 192nd at Ft. Knox, Kentucky. The 192nd, 193rd, and 194th had been National Guard light tank battalions. It is known that the military presence in the Philippines was being built up at the time, so in all likelihood, the entire tank group had been scheduled to be sent to the Philippines earlier that year.

On August 13, 1941, Congress voted to extend federalized National Guard units’ time in the regular Army by 18 months. Two days later, on August 15, the 194th received its orders to go overseas. The buoys being spotted by the pilot may have sped up the transfer of the tank battalions to the Philippines with only the 192nd and 194th reaching the islands, but it was not the reason for the battalions going to the Philippines. It is also known that the 193rd Tank Battalion had sailed for Hawaii – on its way to the Philippines – when Pearl Harbor was attacked. After it arrived in Hawaii, the battalion was held there. The 70th and 191st never received orders for the Philippines because of the war. Some military documents from the time show the name of the Provisional Tank Group in the Philippines as the First Provisional Tank Group.

Ironically, the many men in the battalion learned it was going overseas from a phone call from the wife of one of the officers from St. Joseph, Missouri. She asked her husband, “Is it true that your unit is going to the Philippines?”

The battalion’s new tanks were sent west from Ft. Knox, Kentucky, where they had been requisitioned by an officer of the 192nd Tank Battalion, 2nd Lt. William Gentry, for the battalion. Gentry was given written orders from the War Department giving him authority to take tanks from any unit so the 194th had its full complement of tanks. In some cases, the tanks he took had just arrived at the fort on flatcars and were about to be unloaded when he and his detachment arrived and took the tanks from soldiers waiting to unload them. From Ft. Knox, the tanks were sent west by train and were waiting for the battalion at Ft. Mason.

After receiving orders to report to Ft. Mason, California, men whose enlistments dates were going to expire were replaced. The replacements had absolutely no training in tanks. The remaining members and new members of the battalion – on September 4 –  traveled south from Ft. Lewis, by train, to Ft. Mason north of San Francisco arriving at 7:30 A.M. on the 5th. From there, they were ferried, on the U.S.A.T. General Frank M. Coxe to Ft. MacDowell on Angel Island where they were inoculated. Those men with medical conditions were replaced. These replacements appear to have come from units stationed at Ft. Ord, California. While the battalion was at Ft. Mason, the town of Salinas provided a bus so that the parents of men could go to San Francisco to say goodbye to their sons. Many had no idea that this was the last time they would be seeing them.

After the attack, the 194th was ordered to Mabalacat a few miles from Clark Field. The battalion remained in the area until December 13th, when they were ordered to Fort McKinley. The tankers were now part of the South Luzon Force and positioned south of Manila.

The company held the Tagaytay Ridge, on the 15th, and attempted to catch fifth columnists who sent up flares at night. On the 25th, they withdrew over the Taal Road to Santo Tomas and bivouacked near San Paolo, and assisted in operations at the Lucena-Pagbilao-Lucban area.

On December 26th, Robert’s platoon of tanks received orders to proceed to Lucban because the Japanese had landed troops in the area. When the tankers got to the Lucban area, an American officer ordered the tanks up Route 3 to see how strong the Japanese forces were in the area. Part of the reason for the tanks being called to do reconnaissance was that the American command wanted to impress the Filipino troops. Robert protested this move since no reconnaissance had been made of the area. He believed that the tankers could be entering a trap. In spite of his protests, he was ordered to proceed up the road.

Being a platoon commander meant that Robert’s tank was the first tank in the column. As the tanks went down the trail, the trail made a sharp turn. His tank made the turn and took out the Japanese anti-tank gun. But it was hit by a shell from a Japanese field artillery gun. The shell came through the front hatch and instantly killed his tank driver. The explosion also blew off Robert’s legs killing him. The tank swerved off the road into a ditch. The explosion had caused the front hatches of the tank to be blown off. This left the surviving crew members exposed to enemy fire. As the surviving tank crew members attempted to escape the tank, they were machine-gunned by the Japanese.

According to Sgt. Emil Morrello, Needham was still alive. When he organized the surviving tank crew members to make a march to Manila, Lt. Robert Needham refused to be moved. He believed that he would be a hindrance and jeopardize the attempt to reach the lines. He asked the men to button him in a disabled tank. He died in the tank.

2nd Lt. Robert F. Needham was Killed in Action outside of Lucban on Friday, December 26, 1941. Since his final resting place is unknown, his name appears on the Tablets of the Missing at the American Military Cemetery at Manila. He was posthumously awarded the Purple Heart and the Silver Star.

After the war, a United States Recovery Team was sent to the Barrio of Piis in the Philippine Islands to recover remains. Local residents claimed that the remains of two Americans were still inside an American tank that had been destroyed during a tank battle in December 1941. One man was found in the tank driver’s side of the tank and the other was found in the assistant tank driver’s position. The residents did not bury the soldiers but filled the tank with dirt. When the bodies were removed and the remains of both men were buried at Batangas as Unknowns X-7 and X-8. In addition, the remains of a third American were found outside the tank and buried by the team.

Since there was no way, at the time, to know if the remains found at the tank were those of Needham or another member of the crew, 2nd Lt. Robert F. Needham’s name appears on the Tablets of the Missing at the new American Military at Manila.