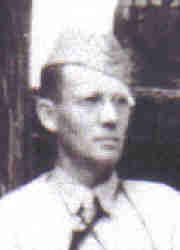 “I am well and uninjured. Do not worry. Hope that you and the folks are well. Tell dad to celebrate for both of us on his birthday. Take good care of the folks. Say hello to all my friends. Wish you all the happiness and luck in the world. Write to me in care of the Red Cross. Love to all–Frank.”
– 20 June 1944
– Provost Marshall General sent this message to his wife:

“I am well and doing all right. Received your box and was sure glad to get it. I have not received a letter from you but received one from mom and dad. Also received one from Jean and Maude. Tell them I was glad to hear from them. Hope you will write often. Please write me and tell me if you are getting your allotment. Take care of yourself honey. I hope to be with you soon. Tell mother and dad hello for me. I hope dad is getting all the work he wants to do and please tell mother to keep up her gardening. My regards to all of the friends. If you can send a package, send a Schick injector razor and blades, please. Food and tobacco would also be appreciated around.”

“Received your letters, and was glad to hear from you. Hoping receive more mail from you. Hope you both well. Give my love to Jean. Tell her write. Would sure like to hear from her. Hope she is well and comes to see you often.”
– 1945 – POWs who remained in camp were considered “too ill” to be sent to Japan
– Burial Detail:
– POWs worked in teams of four men to bury dead
– carried as many as six dead POWs in slings to cemetery
– buried in graves that contained 16 to 20 bodies
– of life in the camp he said, “There was nothing to do but wait for the return of the Yanks. I knew something would happen.”
– Japanese guards in towers would take aim on a POW below for the fun of it and kill the man . Of this, he said, “There was nothing we could do about it.”
– He recalled that after the Americans landed on Luzon, the Japanese told them that they were no longer prisoners. “But they added, ‘If one of you goes outside the walls he will be shot.'”
Liberated:
– 31 January 1945 – U.S. Army Rangers
– left behind a roster of the 194th that he had promised to try to get out of the camp
– the roster was recovered and is now in the National Archives in Washington D.C.
– After he was liberated he spoke to NBC Radio, he said, “The chow is swell. This bully beef and hash spuds taste like chicken and dumplings compared to the Japanese ‘breakfast of champions’.”
– He also said, to NBC, the POWs made wooden shoes, wooden musical instruments, wooden spoons, forks, and the Japanese were impressed with their ingenuity, “The Japanese commander said that if he didn’t watch us, we’d make a train out of wood and ride it to freedom.”
– 28 February 1945
– sent message home: “Everything O.K. Home soon. Tell mother and dad. Love all.”
Hospitalized:
– Letterman General Hospital – San Francisco, California
– March 1945
– hospitalized with pneumonia
– 1 April 1945 – returned to Salinas
– after he returned home, he was given a roster of C Company
– he looked at it and said, “There were so many I haven’t seen since Bataan–it’s hard to remember all of them.”
– when asked how he had learned Japanese, he said, “Those men just learned. You can learn most anything at the point of a bayonet.”
Selective Service Registration: 9 July 1945
– registration indicated he was a discharged veteran
Married and Divorced
Married: Glenna R. Row – 19 November 1950
Children: 2 step-sons
Occupation: Pacific Gas & Electric
– Repairman
Died: 25 April 1957
– never recovered from his time as a POW
– complications from war-related illnesses
Buried: Garden of Memories – Salinas, California