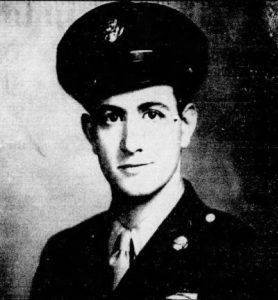 Note: On August 15, 1941, orders were issued, to the company, for duty in the Philippines because of an event that happened during the summer. A squadron of American fighters was flying over Lingayen Gulf when one of the pilots noticed something odd. He took his plane down and identified a buoy in the water. He came upon more buoys that lined up, in a straight line for 30 miles to the northwest, in the direction of a Japanese occupied island, with a large radio transmitter, hundreds of miles away. The squadron continued its flight plane and flew south to Mariveles and then returned to Clark Field. By the time the planes landed, it was too late to do anything that day.

The next morning, another squadron was sent to the area and found that the buoys had been picked up by a fishing boat that was seen making its way toward shore. Since communication between and Air Corps and Navy was poor, the boat was not intercepted. It was at that time the decision was made to build up the American military presence in the Philippines.

“According to War Department records, you have been designated as the emergency addressee of Corporal Ethan H. Campbell, 20,720,205, who, according to the latest information available, was serving in the  Philippine Islands at the time of the final surrender.

In July 1942, the family received a second letter. The following is an excerpt from it.

“The last report of casualties received by the War Department from the Philippines arrived early in the morning of May 6. Through this date, Cpl. Ethan H. Campbell had not been reported as a casualty. The War Department will consider the persons serving in the Philippine Islands as “missing in action” from the date of the surrender of Corregidor, May 7, until definite information to the contrary is received. “Efforts to secure prisoner of war lists from the Philippines have not been successful to this date due to the lack of communication and the fact that the Japanese Government has not yet given permission for the Swiss representative and the International Red Cross delegates to make visits to prisoner of war camps in the islands. When the lists of prisoners are received, we will clear the name of your son and send you any additional information that we may have.”

– taken by Japanese to Bilibid Prison outside Manila
– Bilibid Prison
– Admitted: 10 October 1942
– malaria
– Discharged: not known
– not known if he was sent to Cabanatuan or sent out to work detail
– Las Pinas Work Detail
– Nichols Field Detail – 6 December 1942
– POWs built runways with picks and shovels at Nichols Field
– literally removed the side of a mountain by hand
– POWs killed by Japanese for violating rules
– housed in Pasay School
– fed leftovers from Japanese kitchen
– Cabanatuan #1
– the camp had been opened to lower death rate among POWs
– Philippine Army Base built for 91st Philippine Army Division
– Japanese put the base into use as POW camp
– “Blood Brother” rule implemented
– if one POW in the group of 10 escaped, the other nine would be killed
– work details sent out to cut wood for POW kitchens
– many were able to smuggle in medicine, food, and tobacco
– men who attempted to escape and caught were executed
– daily POW meal – 16 ounces of cooked rice, 4 ounces of vegetable oil, sweet potato or corn
– in 1944 rice ration was cut in half
– 14 October 1943 – Ethan’s name was on a list released by the War Department of men being held as Prisoners of War
– his parents had learned he was a POW weeks earlier

Hell Ship:
– Taga Maru
– the ship also was known as Coral Maru
– Sailed: Manila – 23 September 1943
– the ship stopped Takao, Formosa
– Arrived: Moji, Japan – 5 October 1943
POW Camp:
– Japan
– Hirohata #12-B
– Arrived: 6 October 1943
– POWs worked at Seitetsu Steel Mill
– Other POWs in the camp worked as stevedores unloading foodstuffs from ships
– If the POWs were caught stealing, all the POWs were punished
– POWs were beaten with belts, ropes, clubs, and fists
–  the POWs had water forced down the nostrils
– they were submerged in cold water and afterward forced to stand nude in the cold
– someone was caught with food stolen from the docks when the POWs returned to the camp
– all the POWs were punished
– The Japanese woke the POWs in the middle of the night and sometimes and ran them around
– One night, they had a huge water tank and the POWs had to jump into the tank and jump out on the other side while naked. Afterward, they stood at
attention
– It was summertime and there were lots of mosquitoes
– If a POW twitched, he was slapped on the side of his head
– The Japanese were determined that they were going to punish all the POWs because of one or two POWs
Liberated: September 1945
– POWs sent to Yokohama and boarded hospital ships where they were given medical examinations and the decision was made where the man would be
sent
– returned to the Philippine Islands for further medical treatment
– 20 September 1945
– his family learned he had been liberated

“Mr. and Mrs. Ralph Campbell: The secretary of war has asked me to inform you that your son, Cpl. Ethan H. Campbell was returned to military control Sept. 9 and is being returned to the United States within the near future. He will be given the opportunity to communicate with you upon his arrival if he has not already done so.