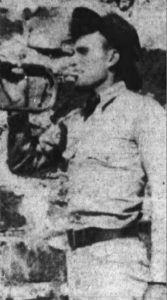 “According to War Department records, you have been designated as the emergency addressee if Private Pierce H. Wade, 06,394,158, who, according to the latest information available, was serving in the  Philippine Islands at the time of the final surrender.

In July 1942, his parents received a second letter. The following are excerpts from it.

“The last report of casualties received by the War Department from the Philippines arrived early in the morning of May 6. Through this date, Private Pierce H. Wade had not been reported as a casualty. The War Department will consider the persons serving in the Philippine Islands as “missing in action” from the date of the surrender of Corregidor, May 7, until definite information to the contrary is received.

– Escaped:
– escaped from the camp and fought as a guerilla
– promoted to 1st Lieutenant
– 10 July 1942 – Caligaman, Bataan
– With most of his men suffering from malaria, dysentery, and beriberi, Wade and another soldier slipped into the Japanese
Hospital at Caligaman, Bataan
– raided the hospital for sulfa,  quinine, various medical supplies, including syringes, and other medical supplies.
– they were discovered by the Japanese
– fought their way out of the barrio killing many Japanese
– the supplies saved the lives of many of his men
– Recaptured: December 1943
– Provincial Jail – Zambales, Philippine Islands
– tortured
– Held at:
– Bilibid Prison
– Santo Thomas University
– Cabanatuan
– Camp Administration:
– the Japanese left POWs to run the camp on their own
– Japanese entered camp when they had a reason
– Food:
– daily POW meal
– 16 ounces of cooked rice, 4 ounces of vegetable oil, sweet potato or corn
– rice was the main staple, few vegetables or fruits
– when they received dried fish, it was covered with maggots and lice
– Blood Brother Rule
– POWs put into groups of ten
– if one escaped the others would be executed
– housed in same barracks
– worked on details together
– Barracks:
– each barracks held 50 men
– often held between 60 and 120 men
– slept on bamboo slats without mattresses, covers, and mosquito netting
– diseases spread easily
– no showers
– Morning Roll Call:
– stood at attention
– frequently beaten over their heads for no reason
Hell Ship:
– Nissyo Maru
– Boarded: 17 July 1944 – 8:00 A.M.
– Sailed: Manila, Philippine Islands – 18 July 1944
– dropped anchor at the breakwater
– remained there until 23 July 1944
– moved to point of Corregidor
– dropped anchor at 2:00 P.M.
– Sailed: 24 July 1944
-one ship sunk by an American submarine – 3:00 A.M. – 26 July 1944
– Arrived: Takao, Formosa – 28 July 1944 – 9:00 A.M.
– Sailed: 28 July 1944 – 7:00 P.M.
– the ship sailed through a storm – 30 July 1944 – 2 August 1944
– 3 August 1944 – POWs issued clothing
– Arrived: Moji, Japan – 4 August 1944 – midnight
– Disembarked: 8:00 A.M.
– herded into a theater
– marched to train station
– dropped off at POW camps along the train line
POW Camp:
– Japan
– Fukuoka Base Camp
– exact camp not known
Liberated:
– September 1945
– returned to the Philippine Islands
Transport:
– U.S.S. Storm King
– Sailed: Manila – not known
– Arrived: San Francisco – 15 October 1945
– taken to Letterman General Hospital
Medals:
– Silver Star – for hospital raid
Rank:
– reduced in rank to Master Sergeant
Military Career:
– remained in military
– rose in rank to 1st Lieutenant
– Some information stated he was promoted to Captain
– appears his first marriage ended in divorce
Remarried: Frances Wade
Residence:
– Madison, Florida
Occupation: contractor
Died:
– 13 February 1999 – Lake City, Florida
Buried:
– Mount Horeb Church Cemetery – Pinetta, Florida