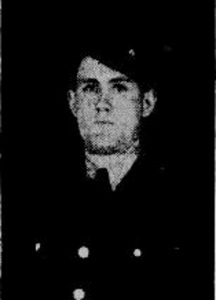 “According to War Department records, you have been designated as the emergency addressee of Private Hayden R. Lawrence, 34,070,428, who, according to the latest information available, was serving in the  Philippine Islands at the time of the final surrender.

“Recent legislation makes provision to continue the pay and allowances of persons carried in a “missing” status for a period not to exceed twelve months;  to continue, for the duration of the war, the pay and allowances of persons known to have been captured by the enemy; to continue allotments made by missing personnel for a period of twelve months and allotments or increase allotments made by persons by the enemy during the time they are so held;  to make make new allotments or increase allotments to certain dependents defined in Public Law 490, 77th Congress.  The latter dependents generally include the legal wife, dependent children under twenty-one years of age and dependent mother, or such dependents as having been designated in official records.  Eligible dependents who can establish a need for financial assistance and are eligible to receive this assistance the amount allotted will be deducted from pay which would otherwise accrue to the credit of the missing individual.

A second letter was sent to the families of men captured on Bataan and Corregidor. Part of it is as follows:

“The last report of casualties received by the War Department from the Philippines arrived early in the morning of May 6. Through this date, Private Hayden R. Lawrence had not been reported as a casualty. The War Department will consider the persons serving in the Philippine Islands as ‘missing in action’ from the date of the surrender of Corregidor, May 7, until definite information to the contrary is received.

– this was the last word on Hayden the family received
Guerilla Information:
– HQ XI Corp. – Zambales, Luzon, Philippine Islands
– fought under command of Col. Gyles Merrill
Prisoner of War:
– captured by Japanese – Tuesday – 16 September 1943
– taken to Angeles City, Central Luzon
– two days without food or water
– Held:
– Zambales Provincial Jail
Trial:
– Japanese tried Hayden for breaking the capitulation
– Hayden was found guilty of the crime
Executed:
– Thursday – 23 September 1943
– tied to a tree and used for bayonet practice at Angeles City Catholic Cemetery, Angeles City, Central Luzon, Philippine Islands
1945 – Letter received by parents
– Dated: 24 April 1945
– the letter was from a Filipino boy employed by the Japanese to clean at the Zambales Jail
– the boy said he saw Hayden in the jail
– he described him so accurately that his parents believed the boy had seen him
– he described the meager rations Hayden received and that he smuggled food and cigarettes to him
– during their meetings, Hayden told him of his 17 months as a guerrilla and how he was captured
– Hayden stated he ate fruits and berries he picked and at times risked his life to get them
– he was captured attempting to get papaya from a tree on the edge of a mountain
– he was spotted by the Japanese who happened to be in the area
– September 1943 – after being captured, he was taken to the Presidencia Building
– 23 September 1943 – a little over a week later he was executed
Buried:
– Angeles City Catholic Cemetery
– the Filipino boy who sent the letter kept the grave clean and, with the help of other Filipinos, put a cross on the grave
– May 1945 – his parents were notified by the War Department he was dead
– after the war, his family requested that his remains be returned to the United States
Posthumously Promoted: Technician Fourth Grade (T/4) – rank equal to Sergeant
Hayden R. Lawrence Upper Elementary School in Deville, Louisiana, was named after him
Reburied:
– 29 October 1948
– Bethel United Methodist Church Cemetery – Bethel, Rapides Parish, Louisiana
– Row: 8 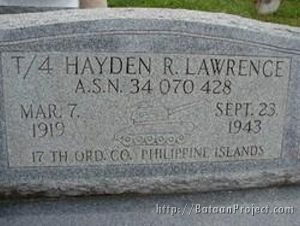