Note: On August 15, 1941, at Ft. Knox, Kentucky, the 194th received orders for duty in the Philippines because of an event that happened during the summer. A squadron of American fighters was flying over Lingayen Gulf when one of the pilots noticed something odd. He took his plane down and identified a buoy in the water. He came upon more buoys that lined up, in a straight line for 30 miles to the northwest, in the direction of a Japanese occupied island, with a large radio transmitter, hundreds of miles away. The squadron continued its flight plane and flew south to Mariveles and then returned to Clark Field. By the time the planes landed, it was too late to do anything that day. 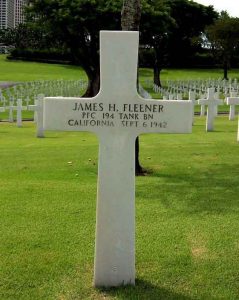