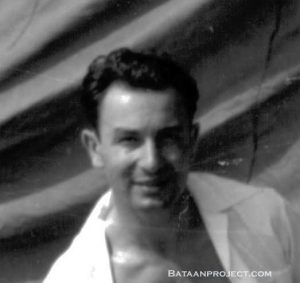 “There is no second position. We are going to stop the Japs and form a new line of defense.”

– Gen. Edward P. King decided that further resistance was futile since approximately 25% of his men were healthy enough to fight
– he estimated they would last one more day
– In addition, he had over 6,000 troops who sick or wounded and 40,000 civilians who he feared would be massacred
– His troops were on one-quarter rations, and even at that ration, he had two days of food left.
– 6:30 P.M. – Lt. Col Ernest Miller – received this message from General Weaver commander of the Provisional Tank Group Headquarters:

“You will make plans, to be communicated to tank company commanders only, and be prepared to destroy within one hour after receipt by radio, or other means, of the word CRASH, all tanks, and combat vehicles, arms, ammunition, gas, and radios, reserving sufficient trucks to close to rear echelons as possible thereafter.”

“According to War Department records, you have been designated as the emergency addressee of First Lieutenant Ralph W. Duby, O, 401, 818, who, according to the latest information available, was serving in the  Philippine Islands at the time of the final surrender.

– 1 June 1942 – POWs formed detachments of 100 men
– POWs marched out the gate and marched toward Capas
– Filipino people gave POWs small bundles of food
– the guards did not stop them
– At Capas, the POWs were put into steel boxcars and rode them to Manila
– the train stopped at Calumpit and switched onto the line to Cabanatuan
– POWs disembarked the train at 6:00 P.M. and put into a schoolyard
– fed rice and onion soup
– Cabanatuan #1
– original name – Camp Pangatian
– Philippine Army Base built for 91st Philippine Army Division
– put into use by the Japanese as a POW camp
– actually three camps
– Camp 1: POWs from Camp O’Donnell sent there in an attempt to lower the death rate
– Camp 2: two miles away
– all POWs moved from there because of a lack of water
– later used for Naval POWs
– Camp 3: six miles from Camp 2
– POWs from Corregidor and from hospitals sent there
– POWs later moved to Camp 1
– Camp 1:
– “Blood Brother” rule implemented
– if one POW in the group of 10 escaped, the other nine would be killed
– POWs patrolled fence to prevent escapes
– Barracks:
– each barracks held 50 men
– often held between 60 and 120 men
– slept on bamboo slats without mattresses, covers, and mosquito netting
– diseases spread easily
– no showers
– Morning Roll Call:
– stood at attention
– frequently beaten over their heads for no reason
– when POWs lined up for roll call, it was a common practice for Japanese guards,
after the POWs lined up, to kick the POWs in their shins with their hobnailed boots
– Work Details:
– Work Day: 7:00 A.M. to 5:00 P.M.
– work details sent out to cut wood for POW kitchens, plant rice, and farm
– they also were frequently hit with a pick handle, for no reason, as they counted off
– POWs on the rice planting detail were punished by having their faces pushed into the mud and stepped on to drive them deeper into the mud
– the POWs had to go into a shed to get the tools, as they came out, they were hit on their heads
– if the guards on the detail decided the POW wasn’t doing what he should be doing, he was beaten
– many POWs on details were able to smuggle in medicine, food, and tobacco into the camp
– to prevent escapes, the POWs set up patrols along the camp’s fence
– men who attempted to escape and caught were executed after being beaten
– the other POWs were forced to watch the beatings
– daily POW meal – 16 ounces of cooked rice, 4 ounces of vegetable oil, sweet potato or corn
– most of the food the POWs grew went to the Japanese
– Camp Hospital:
– 30 Wards
– each ward could hold 40 men
– frequently had 100 men in each
– two tiers of bunks
– sickest POWs on the bottom tier
– each POW had a 2 foot by 6-foot area to lie in
– Zero Ward
– given the name, because it had been missed when counting wards
– became ward where those who were going to die were sent
– fenced off from other wards
– Japanese guards would not go near it
– POWs sent there had little to no chance of surviving
– medical staff had little to no medicine to treat sick
– many deaths from disease caused by malnutrition
– His parents received a second letter from the War Department. The following is an excerpt from it.

“The last report of casualties received by the War Department from the Philippines arrived early in the morning of May 6. Through this date, First Lieutenant Ralph W. Duby had not been reported as a casualty. The War Department will consider the persons serving in the Philippine Islands as “missing in action” from the date of the surrender of Corregidor, May 7, until definite information to the contrary is received.

– it is not known when and if his parents learned he was a Prisoner of War
– July 1944 – selected for transport to Japan
– 15 July 1944
– 25 to 30 trucks arrived at camp to transport POWs to Manila
– POWs left at 8:00 P.M.
– POWs were taken to Bilibid Prison
– arrived at 2:00 A.M. – 16 July 1944
– the only food they received was rotten sweet potatoes
Hell Ship:
– Nissyo Maru
– Friday – 17 July 1944 – POWs left prison at 7:00 A.M.
– Boarded ship: Friday – same day
– Japanese attempted to put all the POWs in one hold
– when they couldn’t, they put 900 the POWs in the forward hold
– 600 POWs held in the rear hold
– Sailed: Manila – same day
– dropped anchor at breakwater until 23 July 1944
– POWs were not fed or given water for over a day and a half after being put in the ship’s hold
– POWs fed rice and vegetables twice a day and received two canteen cups of
water each day
– 23 July 1944 – 8:00 A.M. – ship moved to an area off Corregidor and dropped anchor
– Sailed: Monday – 24 July 1944 – as part of a convoy
– some POWs cut the throats of other POWs and drank their blood
– convoy attacked by American submarines
– four of the thirteen ships in the convoy were sunk
– a torpedo hit the ship but did not explode
– Arrived: Takao, Formosa – Friday – 28 July 1944 – 9:00 A.M.
– Sailed: same-day – 7:00 P.M.
– 30 July 1944 – 2 August 1944 – sailed through a storm
– Arrived: Moji, Japan – Thursday – 3 August 1944 – midnight
– POWs issued new clothes
– POWs disembarked and taken to a pier – Friday – 4 August 1944 – 8:00 A.M.
– POWs put into a movie theater
– later divided into 200 men detachments and sent to different POW camps
– taken by train to POW camps along train lines
POW Camp:
– Japan:
– Tsumori Camp
– August 1944 – arrived at camp
– 22 March 1945
– Japanese found a hidden radio in a barracks
– 13 officers and 6 enlisted men forced to stand at rigid attention for hours
– beaten with clubs until knocked down
– ordered to stand at attention again
– beaten again until they were knocked down again
– forced to kneel on bamboo poles
– the upper part of their bodies had to be rigidly erect
– as they knelt they were slapped in the face
– Ralph was mentioned as one of the POWs beaten
– after the war, it was determined there was no evidence that he had been beaten
– Red Cross packages appropriated by Japanese
– 30 March 1945 – transferred
– Oeyama Camp
– POWs worked at Hachidate Branch Nickel Refinery
– POWs did common labor
– June 1945 – POWs also start working at Miyazu Harbor on docks
– 30 July 1945 – POWs worked on docks during an air raid
– two POWs killed
– Medical Treatment:
– POW doctor made a list of POWs too sick to work
– Japanese orderly made the final decision on which POWs were too sick to work
– Red Cross medicine and medical supplies not issued to the POWs
– Red Cross Boxes:
– misappropriated by Japanese
– American cigarettes, canned ham, canned milk, canned fruit, canned vegetables, chocolate,
raisins, jam, cheese, and eggs were seen in the camp offices
– Punishment:
– POWs beaten with sticks, fists, shoes, and other objects kicked
– POWs were forced to hit POWs who were being punished
Liberated:
– September 1945
– 1st Lt. Ralph W. Duby was not at camp when liberated
– He and other POWs may have left camp in an attempt to contact American troops.
– returned to the Philippine Islands for medical treatment
– This message was sent to his parents

“=MR AND MRS W DUBY: THE SECRETARY OF WAR HAS ASKED ME TO INFORM YOU THAT YOUR HUSBAND, 1ST LT RALPH W Duby  WAS RETURNED TO MILITARY CONTROL AND IS BEING RETURNED TO THE UNITED STATES WITHIN THE NEAR FUTURE HE WILL BE GIVEN THE OPPORTUNITY TO COMMUNICATE WITH YOU UPON HIS ARRIVAL IF HE HAS NOT ALREADY DONE SO=

“ACTING ADJUTANT GENERAL OF THE ARMY”