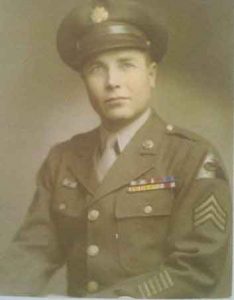 Pvt. Rudolph Oliver Bolstad
Born: 3 September 1905 – Mary Township, Norman County, Minnesota
Parents: Ole E. Bolstad and Ida Aasen-Bolstad
Siblings: 3 sisters, 3 brothers
Home: Perley, Minnesota
Occupation: farmer
Selective Service Registration: 16 October 1940
– Contact: Ingman Oscar Bolstad – brother
Inducted:
– U. S. Army
– 1941 – Fort Snelling, Minnesota
Stationed:
– Fort Lewis, Washington
– arrived April 1941
– described as constantly raining during the winter
– by May, everything was covered in dust since it had not rained in a month
– many men ended up in the camp hospital with colds
– Typical Day – after they arrived at Ft. Lewis
– 6:00 A.M. – first call
– 6:30 A.M. – Breakfast
– During this time the soldiers made their cots, policed the grounds around the barracks, swept the floors of their barracks, and performed other duties.
– 7:30 A.M. to 11:30 A.M. – drill
– 11:30 A.M. – 1:00 P.M. – Lunch
– 1:00 P.M. – 4:30 P.M. – drill
– 5:00 P.M. – retreat
– 5:30 P.M. – Dinner
– men were free after this
– a canteen was located near their barracks and was visited often
– the movie theater on the base that they visited.
– The theater where the tanks were kept was not finished, but when it was, the tankers only had to cross the road to their tanks.
– Saturdays the men had off, and many rode a bus 15 miles northeast to Tacoma which was the largest town nearest to the base
– Sundays, many of the men went to church and services were held at different times for the different denominations
– later the members of the battalion received specific training
– many went to Ft. Knox, Kentucky for training in tank maintenance, radio operation, and other specific jobs
Training:
– Ft. Lewis
– lived in Hq Company’s barracks for six weeks for basic training
– calisthenics, drilled, and classroom training
– trained by Sgt. Glenn Nelson, T/Sgt. Boyce Hyatt, Sgt. Wallace Goodrich, and Sgt. Donald Paine who lived with them
– the battalion went on long reconnaissance with trucks and tanks
– drove all over reservation following maps and learned from observation what the land surrounding the fort looked like
– the purpose was to collect tank data which they would use later
– often had to live off the land
– Ft. Knox – attended radio school
– radioman
Units:
– 194th Tank Battalion

Overseas Duty:
– 4 September 1941
– the battalion traveled by train to Ft. Mason in San Francisco, California
– Arrived: 7:30 A.M. – 5 September 1941
– ferried to Ft. McDowell, Angel Island on U.S.A.T. General Frank M. Coxe
– given physicals and inoculations
– men with medical conditions replaced
– Ship: S.S. President Calvin Coolidge
– Boarded: 3:00 P.M. – 8 September 1941
– Sailed: 9:00 – same day
– Arrived: Honolulu, Hawaii – 13 September 1941 – 7:00 A.M.
– four-hour shore passes issued
– Sailed: 5:00 P.M. – same day
– escorted by the heavy cruiser, the U.S.S. Astoria, an unknown destroyer, and the U.S.S. Guadalupe a replenishment oiler
– heavy cruiser intercepted several ships after smoke was seen on the horizon
– ships belonged to friendly countries
– Arrived: Manila Bay – 7:00 A.M. – 23 September 1941
– Disembarked: 3:00 P.M.
– taken to Ft. Stotsenburg by truck
– lived in tents until 15 November 1941
Philippines
– Stationed:
– Ft. Stotsenburg
– lived in tents upon arriving
– 15 November 1941 – moved into barracks
– the barracks walls were open and screened three feet from the bottom
– above that, the walls were woven bamboo that allowed the air to pass through
– washing – the lucky man washed by a faucet with running water
Work Day:
– 5:15 A. M. – reveille
– washing – the lucky man washed by a faucet with running water
– 6:00 A.M. – breakfast
– 7:00 to 11:30 A.M.
– Noon – lunch
– 1:30 to 2:30 P.M. – worked
– the shorter afternoon work period was based on the belief that the climate made it too hot to work
– the tankers worked until 4:30 P.M.
– the term “recreation in the motor pool” was used for this work time
Tank Crews:
– during this time, the tank crews learned about the M3A1 tanks
– tank commanders read manuals on tanks and taught crews about the tanks
– learned about the 30-caliber and 50 caliber machineguns
– spent three hours of each day taking the guns apart and putting them back together
– did it until they could disassemble and assemble the guns blindfolded
– could not fire guns since they were not given ammunition which had been requested by Gen. King but not released by Gen. MacArthur
– 5:10 – dinner
– after dinner, the soldiers were free to do what they wanted to do
Recreation:
– the soldiers spent their free time bowling, going to the movies,
– they also played horseshoes, softball, badminton, or threw a football around
– on Wednesday afternoons, they went swimming
– they also went to Mt. Aarayat National Park and swam in the swimming pool there that was filled with mountain water
– men were allowed to go to Manila in small groups
– they also went to canoeing at Pagsanjan Falls in their swimsuits
– the country was described as being beautiful
– 1 December 1941
– tanks ordered to the perimeter of Clark Field
– 194th guarded the north end of the airfield and the 192nd guarded the south end
– two crew members of each tank and half-track remained with the vehicles at all times
– meals served by food trucks
– those not assigned to a tank or half-track remained at the command post
Engagements:
– Battle of Luzon – 8 December 1941 – 6 January 1942
– 8 December 1941
– lived Japanese attack on Clark Field
– planes did not go after tanks
– after attack 194th sent to a bivouac three kilometers north of Clark Field
– from there they were sent to Barrio of San Joaquin on the Malolos Road
– 12 December 1941
– moved to new bivouac south to San Fernando near Calumpit Bridge
– arrived at 6:00 A.M.
– 15 December 1941
– received 15 Bren gun carriers
– turned some over to 26th Cavalry, Philippine Scouts
– 22 December 1941
– sent to Rosario
– west and north of the barrio
– ordered out of the 71st Division Commander
– said they would hinder the cavalry’s operation
– 22/23 December 1941
– operating north of Agno River
– main bridge at Carmen bombed
– 24/25 December 1941
– tank battalions make an end run to get south of Agno River
– ran into Japanese resistance but successfully crossed the river
– 25/26 December 1941
– held south bank of Agno River from west of Carmen to Carmen-Akcaka-Bautista Road
– 192nd held from Carmen to Route 3 to Tayug to the northeast of San Quintin
– it was at this time he telegrammed home and told his he was well
– this was the last time his family received any information on him
Missing in Action:
– 27 December 1941 – Col. Ernest Miller’s record on A Company show Bolstad as missing
– Rudolph Bolstad was a member of 2nd Lt. James Hart’s tank crew
– POW documents from Cabanatuan show he was believed to have died – 26 December 1941
– Hart’s tank held its position and operated behind enemy lines
– reported their operations – 7 January 1942
Guerrilla:
-Pampanga, Philippine Islands
– member of “Lapham’s Raiders”
– promoted to corporal
– September 1944
– Luzon, Philippine Islands
– Evacuated to Australia:
– 2 September 1944 – U.S.S. Narwhal – submarine
– others evacuated with him: Capt. Wilbur Lage, Lt. Charles L. Naylor, and Sgt. Wilbur Jellison
– most likely these men were ill or wounded
Hospitalized:
– Veterans Administration Hospital in the Chicago area
Promoted: Sergeant
– headstone application indicates he was a 1st Lieutenant
Discharged: 30 May 1946
Died:
– 2 September 1946 – Chicago, Illinois
Buried:
– Concordia Lutheran Cemetery – Hendrum, Minnesota 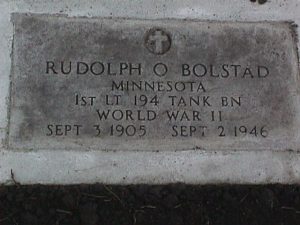