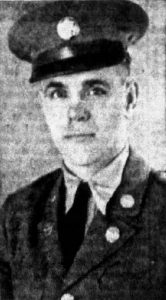 “According to War Department records, you have been designated as the emergency addressee of Private First Class Louis W. Yager, 20,720,206, who, according to the latest information available, was serving in the  Philippine Islands at the time of the final surrender.

– 1 June 1942 – POWs formed detachments of 100 men
– POWs marched out the gate and marched toward Capas
– Filipino people gave POWs small bundles of food
– the guards did not stop them
– At Capas, the POWs were put into steel boxcars and rode them to Manila
– the train stopped at Calumpit and switched onto the line to Cabanatuan
– POWs disembarked the train at 6:00 P.M. and put into a schoolyard
– fed rice and onion soup
– 4 June 1942 – transfer of POWs completed
– only sick POWs remained at Camp O’Donnell
– Cabanatuan
– original name – Camp Pangatian
– Philippine Army Base built for 91st Philippine Army Division
– put into use by the Japanese as a POW camp
– actually three camps
– Camp 1: POWs from Camp O’Donnell sent there in an attempt to lower death rate
– Camp 2: two miles away
– all POWs moved from there because of a lack of water
– later used for Naval POWs
– Camp 3: six miles from Camp 2
– POWs from Corregidor and from hospitals sent there
– camp created to keep Corregidor POWs separated from Bataan POWs
– Corregidor POWs were in better shape
Died:
– Sunday – 7 June 1942 – malaria
– Approximate time of death – 8:00 AM
Possessions: Service Record and a wallet with $15.00
– he was the 315 POW to die in the camp
Buried:
– Cabanatuan Cemetery
– Grave 405

“The last report of casualties received by the War Department from the Philippines arrived early in the morning of May 6. Through this date, Private First Class Louis W. Yager had not been reported as a casualty. The War Department will consider the persons serving in the Philippine Islands as “missing in action” from the date of the surrender of Corregidor, May 7, until definite information to the contrary is received.

– sometime in 1943, his family received another letter from the War Department

“I am deeply distressed to inform you corrected report just received states your son Private First Class Louis J. W. Yager who was previously reported missing in action was killed on Seven June Nineteen Forty Two in the Philippine Islands period the secretary of war asks that I express his deep sympathy in your loss and his regret that unavoidable circumstances made necessary the unusual lapse in time in reporting your sons death to you confirming letter follows.

– His mother received this letter – dated June 4, 1945, from the War Department.

“It is with profound regret that I confirm the recent telegram informing you of the death of your son, Private First Class Louis J. W. Yager, 20,720,206, Infantry, who was previously reported missing in action.

“An official report has now been received which states that he was killed in action in the Philippine Islands on 7 June 1942. 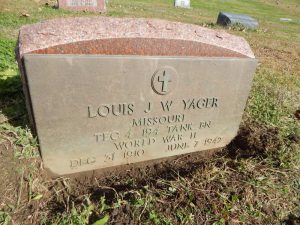