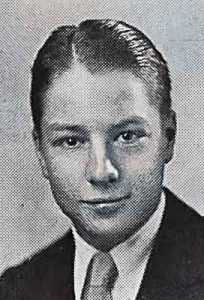 2nd Lt. Weeden Arthur Petree Jr.
Parents: Weeden A. Petree Sr. & Bernice Richards-Petree
Siblings: 1 brother, 2 sisters
Nickname: Arthur
Home: 3225 Lafayette Street – Saint Joseph, Missouri
Education:
– 1930 – Central High School, St. Joseph, Missouri
– 2 years of college
Occupation: substitute mail carrier – U.S. Post Office
Enlisted: Missouri National Guard
Inducted:
– U. S. Army – 10 February 1941
Training:
– Fort Lewis, Washington
– described as constantly raining during the winter
– many men ended up in the camp hospital with colds
– Typical Day – after they arrived at Ft. Lewis
– 6:00 A.M. – first call
– 6:30 A.M. – Breakfast
– During this time the soldiers made their cots, policed the grounds around the barracks, swept the floors of their barracks, and performed other duties.
– 7:30 A.M. to 11:30 A.M. – drill
– 11:30 A.M. – 1:00 P.M. – mess
– 1:00 P.M. – 4:30 P.M. – drill
– 5:00 P.M. – retreat
– 5:30 P.M. – mess
– men were free after this
– a canteen was located near their barracks and was visited often
– the movie theater on the base that they visited.
– The theater where the tanks were kept was not finished, but when it was, the tankers only had to cross the road to their tanks.
– Saturdays the men had off, and many rode a bus 15 miles northeast to Tacoma which was the largest town nearest to the base
– Sundays, many of the men went to church and services were held at different times for the different denominations
– later the members of the battalion received specific training
– many went to Ft. Knox, Kentucky for training in tank maintenance, radio operation, and other specific jobs
Unit:
– 194th Tank Battalion
– reassigned to A Company as a tank platoon commander

The next day, when another squadron was sent to the area, the buoys had been picked up by a fishing boat – with a tarp on its deck – which was seen making its way to shore. Since communication between the Air Corps and Navy was difficult, the boat escaped. It was at that time the decision was made to build up the American military presence in the Philippines.
– the battalion left old tanks and scout cars at Ft. Lewis
– received 3 – Stuart tanks- in San Francisco