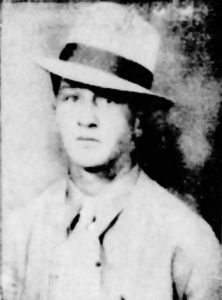 Pvt. Walter Victor Martella
Born: 5 July 1920 – Monterey County, California
Parents: Domenico Martella & Piarina Moro-Martella
Siblings: 1 sister
Hometown: Stockton, California
– 210 Lincoln Avenue – Salinas, California
– living with sister and brother-in-law
Enlisted: California National Guard
Inducted:
– U.S. Army
– 10 February 1941 – Salinas Army Airfield
Unit:
– C Company, 194th Tank Battalion
Stationed:
– Fort Lewis, Washington
– described as constantly raining during the winter
– many men ended up in the camp hospital with colds
– Typical Day – after they arrived at Ft. Lewis
– 6:00 A.M. – first call
– 6:30 A.M. – Breakfast
– During this time the soldiers made their cots, policed the grounds around the barracks, swept the floors of their barracks, and performed other duties.
– 7:30 A.M. to 11:30 A.M. – drill
– 11:30 A.M. – 1:00 P.M. – mess
– 1:00 P.M. – 4:30 P.M. – drill
– 5:00 P.M. – retreat
– 5:30 P.M. – mess
– men were free after this
– a canteen was located near their barracks and was visited often
– the movie theater on the base that they visited.
– The theater where the tanks were kept was not finished, but when it was, the tankers only had to cross the road to their tanks.
– Saturdays the men had off, and many rode a bus 15 miles northeast to Tacoma which was the largest town nearest to the base
– Sundays, many of the men went to church and services were held at different times for the different denominations
Training:
– the battalion went on long reconnaissance with trucks and tanks
– drove all over reservation following maps and learned from observation what the land surrounding the fort looked like
– the purpose was to collect tank data which they would use later
– often had to live off the land
– 30 April 1941 – battalion went on an all-day march
– ate dinner in woods brought to them by the cooks in trucks
– march was two hours one way and covered about 10 miles total
– stopped in an abandoned apple orchard in bloom
– Motorcycles:
– first motorcycles arrived in May 1941
– all battalion members had to learn to ride them
– in early May 1941, the battalion, except men who had been drafted, went on its first overnight bivouac
– the new men did not have shelter halves
– left around noon and returned around noon the next day
Specialized Training:
– some members of the battalion received specific training
– many went to Ft. Knox, Kentucky, for training in tank maintenance, radio operation, and other specific jobs
– those men who remained at Ft. Lewis often found themselves policing the base collecting garbage and distributing coal for the base during the week
– the battalion did most of its tank training on weekends

Note: The decision for this move – which had been made on August 15, 1941, at Ft. Knox, Kentucky – was the result of an event that took place in the summer of 1941. A squadron of American fighters was flying over Lingayen Gulf, in the Philippines, when one of the pilots, who was flying at a lower altitude, noticed something odd. He took his plane down and identified a flagged buoy in the water and saw another in the distance. He came upon more buoys that lined up, in a straight line for 30 miles to the northwest, in the direction of a Japanese occupied island which was hundreds of miles away. The island had a large radio transmitter. The squadron continued its flight plan south to Mariveles and returned to Clark Field. When the planes landed, it was too late to do anything that day. 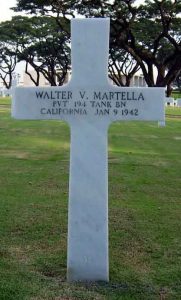