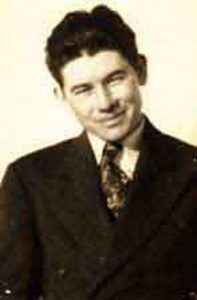 “According to War Department records, you have been designated as the emergency addressee of Private First Class Fred J. Bolinger, 20, 949, 661, who, according to the latest information available, was serving in the  Philippine Islands at the time of the final surrender.

– POW Camps
– Philippine Islands
– Cabanatuan
– original name – Camp Pangatian
– Philippine Army Base built for 91st Philippine Army Division
– Japanese put the base into use as POW camp
– actually three camps
– Camp 1: POWs from Camp O’Donnell and the Bataan hospitals
– Camp 2: four miles away
– all POWs moved from camp because of a lack of water
– later used for Naval POWs
– Camp 3: six miles from Camp 2
– POWs from Corregidor
– Japanese wanted to keep them separate from POWs from Camp O’Donnell
– the camp was merged into Camp One in January 1943
– “Blood Brother” rule implemented
– if one POW in the group of 10 escaped, the other nine would be killed
– work details sent out to cut wood for POW kitchens
– many were able to smuggle in medicine, food, and tobacco
– men who attempted to escape and caught were executed
– daily POW meal – 16 ounces of cooked rice, 4 ounces of vegetable oil, sweet potato or corn
– Barracks:
– each barracks built for 50 POWs
– 60 to 120 POWs were held in each one
– POWs slept on bamboo strips
– no showers
– Camp Hospital:
– 30 Wards
– each ward could hold 40 men
– frequently had 100 men in each
– two tiers of bunks
– sickest POWs on the bottom tier
– each POW had a 2 foot by 6-foot area to lie in
– Zero Ward
– given the name, because it had been missed when counting wards
– became ward where those who were going to die were sent
– fenced off from other wards
– Japanese guards would not go near it
– POWs sent there had little to no chance of surviving
– Clark Field
– considered by men who were there as the best POW camp in the Philippines
– slept in barracks on bunks
– May 1942
– The workday started at 6:00 A.M.
– POWs were fed breakfast
– one cup of rice
– 6:00 P.M. – dinner
– POWs worked seven days a week – no days off
– POWs arrived and cut grass and screened gravel
– dug rocks out of the ground to repair runways
– POW detachments had a quota of rock to meet each day
– had to work until the quota for the day was met
– at first, guards, who were combat veterans, told the POWs to work slowly
– the guards wanted to stay on detail as long as possible
– when guards changed, the treatment of POWs changed
– POWs worked long hours on short rations
– POWs expected to keep working regardless of health
– if a POW was injured there were no medical supplies to treat him
– POWs with malaria did not have to work
– if the Japanese determined a POW wasn’t “too sick” the man worked
– POWs had to work during a typhoon in loin clothes
– at one point the POWs had to move live bombs from one building to another building
– those who could not work were severely beaten
– beatings common
– POWs stated that someone was always being hit over the head with a saber by one lieutenant
– also beaten for no reason with a golf club
– when on POW escaped the other POWs were not fed and stood at attention for hours
– in July 1942, his family received another message from the War Department. The following is an excerpt from it.

“The last report of casualties received by the War Department from the Philippines arrived early in the morning of May 6. Through this date, Private First Class Fred J. Bolinger had not been reported as a casualty. The War Department will consider the persons serving in the Philippine Islands as “missing in action” from the date of the surrender of Corregidor, May 7, until definite information to the contrary is received.

– Cabanatuan
– sent there due to illness or injury
– Lipa Batangas
– January 1943
– POWs built runways and revetments – Lipa Airfield
– worked on farm
– Bilibid Prison
– Admitted: 27 January 1943
– lumbar strain
– Discharged: 10 February 1943
– sent to Cabanatuan
– remained there until selected for transport to Japan
– sometime during 1943, his family learned he was a Prisoner of War

Hell Ship:
– Noto Maru
– Sailed: Manila – 27 August 1944
– spent night in Subic Bay, Philippine Islands
– sailed 28 August 1944
– Arrived: 30 August 1944 – Takao, Formosa
– Sailed: Same Day
– Arrived: 30 August 1944 – Keelung, Formosa
– Sailed: 31 August 1944
– Arrived: 4 September 1944 – Moji, Japan
POW Camp:
– Japan
– Ashio Camp #8-D
– on handwritten roster
– also known as Tokyo #9-B
– POWs worked in a copper mine
– spent his first six months working underground in the Ashio Copper mine
– mine had been closed before the war but reopened
– POWs had to work bent over because they were tall compared to the Japanese
– next worked at a copper smelter
– POW #141
– POW kitchen was 40 feet from the camp latrines
– POWs had nothing to cover the utensils with
– flies were in everything
– The Japanese guard in charge of kitchen stole food meant for POWs for his own use
– the camp was located on the side of a mountain
– Barracks:
– 2 wooden buildings
– POWs slept on two tiers of bunks
– the nights were cold and POWs only had thin blankets
– barracks were infested with lice
– water line froze in winter which meant the POWs could not bathe
– Meals:
– always a mixture of barley, maize, Indian corn, and rice
– once a month POWs the POWs got horse bones
– oiled them for a week so they could be eaten
– Red Cross Boxes:
– packages were pilfered by Japanese for sugar, canned foods, chocolate, and other items
– clothing and shoes sent by Red Cross was never issued
– Red Cross blankets meant for the POWs were given to the guards
– since a certain number of POWs had to work every day, sick POWs were sent to mine
– 25 August 1945 – POWs told Japan was attempting to negotiate an armistice with the United States
– 28 August 1945 – POWs see B-29s heading north early in the day
– later in the day saw a large number of B-29s heading toward Tokyo
– 29 August 1945 – each POW received two donuts
– planes, from the U.S.S. Jacinta, drop 50-gallon barrows to POWs
– POWs receive mail that the Japanese never gave to them
Liberated:
– 3 September 1945
– 5 September 1945 – POWs arrived at Yokohama by train
– 100 POWs pushed past guards and arrived on their own
– returned to the Philippine Islands

“Mrs. M. Mitchell: The secretary of war has asked me to inform you that your brother, PFC Fred J. Bolinger was returned to military control Sept. 5 and is being returned to the United States within the near future. He will be given the opportunity to communicate with you upon his arrival if he has not already done so.