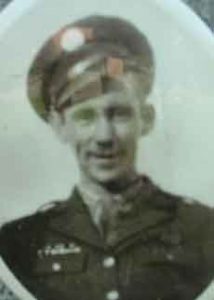 Pvt. Lawrence Odom
Born: 21 November 1917 – Kuttawa, Kentucky
Parents: James G. Odom & Mamie Clemens-Odom
Siblings: 1 brother, 1 sister
Hometown: Eddyville, Kentucky
Employment: Works Project Administration
Selective Service Registration: 16 October 1940
Contact: J. G. Odom – father
Inducted:
– U. S. Army
– 22 January 1941 – Louisville, Kentucky
Training:
– Fort Knox, Kentucky
– Assigned: D Company, 192nd Tank Battalion
Basic Training
– the training was done with First Armored Division
– soldiers rushed through basic training
– Week 1: infantry drilling
– Week 2: manual arms and marching to music
– Week 3: machine gun
– Week 4: pistol
– Week 5: M1 rifle
– Week 6: field week – training with gas masks, gas attacks, pitching tents, and hikes
– Weeks 7: Time was spent learning the weapons, firing each one, learning the parts of the weapons and their functions, field stripping and caring
for weapons, and the cleaning of weapons
Typical Day
– 6:15 with reveille
– most of the soldiers were up before this since they wanted to wash and dress.
– 7:00 to 8:00 – Breakfast
– 8:00 to 8:30 – calisthenics
– Afterward, the tankers went to various schools within the company.
– training in using and maintaining 30 and 50 caliber machine guns and pistols
– training in map reading, care of personal equipment, military courtesy, and training in tactics.
– 11:30 the soldiers stopped what they were doing and cleaned up for mess – – Noon to 1:00 P.M. – mess
– Afterward, they attended the various schools which they had been assigned to on January 13, such as mechanics, tank driving, radio operating.
– 4:30 – the soldiers called it a day and returned to their barracks and put on dress uniforms
– 5:00 – retreat
– 5:30 – dinner
– After dinner, they were off duty
– 9:00 P.M. – lights were out
– soldiers but did not have to turn in
– 10:00 P.M. – Taps was played.

Note: The reason for this move was an event that took place in the summer of 1941. A squadron of American fighters was flying over Lingayen Gulf when one of the pilots, who was flying lower than the other planes, noticed something odd in the water. He took his plane down and identified a buoy, with a flag, in the water and saw another in the distance. He came upon more flagged buoys that lined up – in a straight line – for 30 miles to the northwest, in the direction of a Japanese occupied island, hundreds of miles to the northwest, which had a large radio transmitter. The squadron continued its flight plane and flew south to Mariveles and then returned to Clark Field. When the planes landed, it was too late to do anything that day.

The next day – when a when planes were sent to the area – the buoys had been picked up and a fishing boat was seen making its way toward shore. Since communication between the planes and the Navy was poor, nothing was done to intercept the boat. It was at that time the decision was made to build up the American military presence in the Philippines.

It was the evening of April 8 that Gen. Edward P. King decided that further resistance was futile, since approximately 25% of his men were healthy enough to fight, and he estimated they would last one more day. In addition, he had over 6,000 troops who sick or wounded and 40,000 civilians who he feared would be massacred. The other problem facing King was his men were on one-quarter ration per man and even at that ration, he only had two days of food left.

At 2:oo A.M. April 9, Gen. King sent a jeep under a white flag carrying Colonel Everett C. Williams, Col. James V. Collier and Major Marshall Hurt to meet with the Japanese commander about terms of surrender. Shortly after daylight Collier and Hunt returned with word of the appointment. The tank battalion commanders received this order on April 8: “You will make plans, to be communicated to company commanders only, and be prepared to destroy within one hour after receipt by radio, or other means, of the word ‘CRASH’, all tanks and combat vehicles, arms, ammunition, gas, and radios: reserving sufficient trucks to close to rear echelons as soon as accomplished.”

Upon receiving the order, the tank crews circled the tanks and fired an armor-piercing shell into the engine of each tank. They next opened the gasoline cocks in the crew compartments and dropped hand grenades into each tank.

Shortly after this was done a Japanese colonel and interpreter arrived. King was told the officer was Homma’s Chief of Staff and he had come to discuss King’s surrender. King attempted to get insurances from the Japanese that his men would be treated as prisoners of war, but the Japanese officer – through his interpreter – accused him of declining to surrender unconditionally.  At one point King stated he had enough trucks and gasoline to carry his troops out of Bataan. He was told that the Japanese would handle the movement of the prisoners. The two men talked back and forth until the colonel said through the interpreter, “The Imperial Japanese Army are not barbarians.” King found no choice but to accept him at his word.