“According to War Department records, you have been designated as the emergency addressee of Private Russell S. Garrison, 39, 006, 535, who, according to the latest information available, was serving in the  Philippine Islands at the time of the final surrender.

– Cabanatuan
– original name – Camp Pangatian
– Philippine Army Base built for 91st Philippine Army Division
– put into use by the Japanese as a POW camp
– actually three camps
– Camp 1: POWs from Camp O’Donnell sent there in an attempt to lower the death rate
– Camp 2: two miles away
– all POWs moved from there because of a lack of water
– later used for Naval POWs
– Camp 3: six miles from Camp 2
– POWs from Corregidor were sent there
– POWs later moved to Camp 1
– Camp 1:
– “Blood Brother” rule implemented
– if one POW in the group of 10 escaped, the other nine would be killed
– POWs patrolled fence to prevent escapes
– Barracks:
– each barracks held 50 men
– often held between 60 and 120 men
– slept on bamboo slats without mattresses, covers, and mosquito netting
– diseases spread easily
– no showers
– Morning Roll Call:
– stood at attention
– frequently beaten over their heads for no reason
– when POWs lined up for roll call, it was a common practice for Japanese guards, after the POWs lined up, to kick the POWs in their shins with their
hobnailed boots
– Work Details:
– Work Day: 7:00 A.M. to 5:00 P.M.
– work details sent out to cut wood for POW kitchens, plant rice, and farm
– they also were frequently hit with a pick handle, for no reason, as they counted off
– POWs on the rice planting detail were punished by having their faces pushed into the mud and stepped on them to drive them deeper into the mud
– the POWs had to go into a shed to get the tools, as they came out, they were hit on their heads
– if the guards on the detail decided the POW wasn’t doing what he should be doing, he was beaten
– many POWs on details were able to smuggle in medicine, food, and tobacco into the camp
– to prevent escapes, the POWs set up patrols along the camp’s fence
– men who attempted to escape and caught were executed after being beaten
– the other POWs were forced to watch the beatings
– daily POW meal – 16 ounces of cooked rice, 4 ounces of vegetable oil, sweet potato or corn
– most of the food the POWs grew went to the Japanese
– Camp Hospital:
– 30 Wards
– each ward could hold 40 men
– frequently had 100 men in each
– two tiers of bunks
– sickest POWs on the bottom tier
– each POW had a 2-foot by 6-foot area to lie in
– Zero Ward
– given the name, because it had been missed when counting wards
– became ward where those who were going to die were sent
– fenced off from other wards
– Japanese guards would not go near it
– POWs sent there had little to no chance of surviving
– medical staff had little to no medicine to treat sick
– many deaths from disease caused by malnutrition
Died:
– Sunday – 28 June 1942 – malaria
– approximate time of death – 6:00 PM
– he was the 449 POW to die at the camp
Buried:
– Cabanatuan Camp Cemetery
– Grave 407
– July 1942 – His parents received a second message from the War Department. The following is an excerpt from it.

“The last report of casualties received by the War Department from the Philippines arrived early in the morning of May 6. Through this date, Private Russell S. Garrison had not been reported as a casualty. The War Department will consider the persons serving in the Philippine Islands as “missing in action” from the date of the surrender of Corregidor, May 7, until definite information to the contrary is received.

– it is not known when his family was notified that he had died as a Prisoner of War
Reburied:
– American Military Cemetery – Manila, Philippine Islands
– Plot: N Row 3 Grave 66 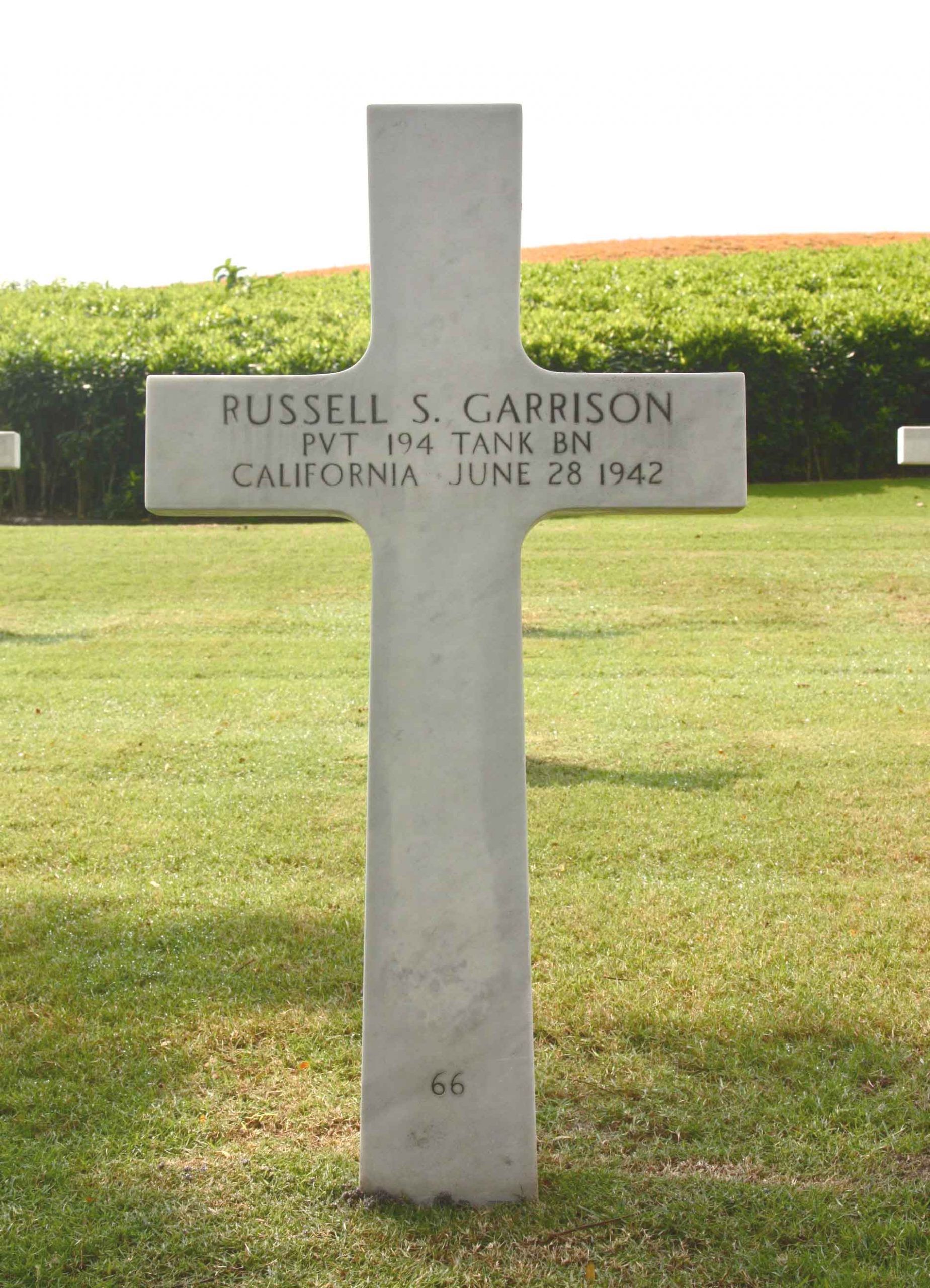