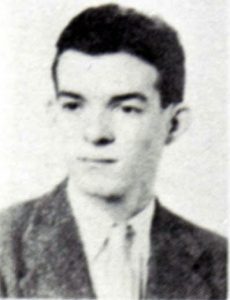 Cpl. Raymond N. DeCloss
Born: 20 August 1918 – Fresno County, California
Parents: Raymond E. DeCloss & Catherine A. Nolan-DeCloss
Siblings: 2 sisters, 2 brothers
Hometown: 21 Pajaro Street – Salinas, California
Enlisted:
– California National Guard
Note: As a POW, he gave his address as 10774 Bluffside Drive – Hollywood, California
Selective Service Registration: 16 October 1940
– did not register since he was already in the National Guard
Inducted:
– U. S. Army
– 10 February 1941
– C Company, 194th Tank Battalion
– transferred to Medical Detachment
– assigned to C Company as a medic
Stationed:
– Fort Lewis, Washington
– described as constantly raining during the winter
– many men ended up in the camp hospital with colds
– Typical Day – after they arrived at Ft. Lewis
– 6:00 A.M. – first call
– 6:30 A.M. – Breakfast
– During this time the soldiers made their cots, policed the grounds around the barracks, swept the floors of their barracks, and performed other duties.
– 7:30 A.M. to 11:30 A.M. – drill
– 11:30 A.M. – 1:00 P.M. – mess
– 1:00 P.M. – 4:30 P.M. – drill
– 5:00 P.M. – retreat
– 5:30 P.M. – mess
– men were free after this
– a canteen was located near their barracks and was visited often
– the movie theater on the base that they visited.
– The theater where the tanks were kept was not finished, but when it was, the tankers only had to cross the road to their tanks.
– Saturdays the men had off, and many rode a bus 15 miles northeast to Tacoma which was the largest town nearest to the base
– Sundays, many of the men went to church and services were held at different times for the different denominations
Uniforms:
– the soldiers wore a collection of uniforms. Some wore new uniforms while other men had World War I uniforms
– The situation was resolved when Lt. Col. Dwight D. Eisenhower and other officers rode up on horseback to where C Company was training.
– one of the officers asked why they were dressed like they were
– later that afternoon, at 4:00 P.M., a truck pulled up to the barracks
– inside were brand new Army overalls
– the soldiers wore these as their dress uniforms until real dress uniforms were received weeks later
Training:
– the battalion went on long reconnaissance with trucks and tanks
– drove all over reservation following maps and learned from observation what the land surrounding the fort looked like
– the purpose was to collect tank data which they would use later
– often had to live off the land
– 30 April 1941 – battalion went on an all-day march
– ate dinner in woods brought to them by the cooks in trucks
– march was two hours one way and covered about 10 miles total
– stopped in an abandoned apple orchard in bloom
– Motorcycles:
– first motorcycles arrived in May 1941
– all battalion members had to learn to ride them
– in early May 1941, the battalion, except men who had been drafted, went on its first overnight bivouac
– the new men did not have shelter halves
– left around noon and returned around noon the next day
Specialized Training:
– some members of the battalion received specific training
– many went to Ft. Knox, Kentucky, for training in tank maintenance, radio operation, and other specific jobs
– those men who remained at Ft. Lewis often found themselves policing the base collecting garbage and distributing coal for the base during the week
– the battalion did most of its tank training on weekends

Note: On August 15, 1941, the decision was made to build up American forces in the Philippines at Ft. Knox, Kentucky. This decision was made because of an event that happened during the summer. A squadron of American fighters was flying over Lingayen Gulf when one of the pilots noticed something odd. He took his plane down and identified a buoy in the water. He came upon more buoys that lined up, in a straight line for 30 miles to the northwest, in the direction of a Japanese occupied island, hundreds of miles away, with a large radio transmitter on it. The squadron continued its flight plan and flew south to Mariveles before returning to Clark Field. By the time the planes landed that evening, it was too late to do anything that day.

“According to War Department records, you have been designated as the emergency addressee of Corporal Raymond N. DeCloss, 20, 900, 700, who, according to the latest information available, was serving in the  Philippine Islands at the time of the final surrender.

– Cabanatuan
– original name – Camp Pangatian
– Philippine Army Base built for 91st Philippine Army Division
– put into use by the Japanese as a POW camp
– actually three camps
– Camp 1: POWs from Camp O’Donnell sent there in an attempt to lower the death rate
– Camp 2: two miles away
– all POWs moved from there because of a lack of water
– later used for Naval POWs
– Camp 3: six miles from Camp 2
– POWs from Corregidor and from hospitals sent there
– POWs later moved to Camp 1
– Camp 1:
– “Blood Brother” rule implemented
– if one POW in the group of 10 escaped, the other nine would be killed
– POWs patrolled fence to prevent escapes
– Barracks:
– each barracks held 50 men
– often held between 60 and 120 men
– slept on bamboo slats without mattresses, covers, and mosquito netting
– diseases spread easily
– no showers
– Morning Roll Call:
– stood at attention
– frequently beaten over their heads for no reason
– when POWs lined up for roll call, it was a common practice for Japanese guards, after the POWs lined up, to kick the POWs in
their shins with their hobnailed boots
– Work Details:
– Work Day: 7:00 A.M. to 5:00 P.M.
– work details sent out to cut wood for POW kitchens, plant rice, and farm
– they also were frequently hit with a pick handle, for no reason, as they counted off
– POWs on the rice planting detail were punished by having their faces pushed into the mud and stepped on
– the POWs had to go into a shed to get the tools, as they came out, they were hit on their heads
– if the guards on the detail decided the POW wasn’t doing what he should be doing, he was beaten
– many POWs on details were able to smuggle in medicine, food, and tobacco into the camp
– to prevent escapes, the POWs set up patrols along the camp’s fence
– men who attempted to escape and caught were executed after being beaten
– the other POWs were forced to watch the beatings
– daily POW meal – 16 ounces of cooked rice, 4 ounces of vegetable oil, sweet potato or corn
– most of the food the POWs grew went to the Japanese
– Camp Hospital:
– 30 Wards
– each ward could hold 40 men
– frequently had 100 men in each
– two tiers of bunks
– sickest POWs on the bottom tier
– each POW had a 2 foot by 6-foot area to lie in
– Zero Ward
– given the name, because it had been missed when counting wards
– became ward where those who were going to die were sent
– fenced off from other wards
– Japanese guards would not go near it
– POWs sent there had little to no chance of surviving
– medical staff had little to no medicine to treat sick
– many deaths from disease caused by malnutrition
Hospitalized
– 9 June 1942 – tested for tuberculosis – test negative
– at some point, he was admitted to the camp hospital
– date of hospitalization has not been found
– in July his family received a second message from the War Department. The following are excerpts from it.

“The last report of casualties received by the War Department from the Philippines arrived early in the morning of May 6. Through this date, Corporal Raymond N. DeCloss had not been reported as a casualty. The War Department will consider the persons serving in the Philippine Islands as “missing in action” from the date of the surrender of Corregidor, May 7, until definite information to the contrary is received.

“It is with deep regret that I am writing to confirm the recent telegram informing you of the death of your son, Corporal Raymond N. DeCloss, 20, 900, 700, Infantry, who was previously reported a prisoner of war.

“Information has now been received from the Japanese government through the International Red Cross stating that your son died on 27 October 1942 in a prisoner of war in the Philippine Islands from malaria and dysentery.

Identifying the remains of Cpl. Raymond N. DeCloss is considered an active case by the Defense POW/MIA Accounting Agency. DNA from a family member is being sought.