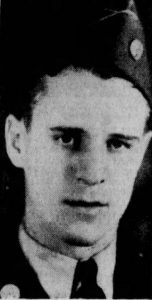 “According to War Department records, you have been designated as the emergency addressee if Sergeant Stanley L. Zaronsky, 15,056,631, who, according to the latest information available, was serving in the  Philippine Islands at the time of the final surrender.

– A second letter was sent to the families of men captured on Bataan and Corregidor in July 1942. The following is an excerpt from it.

“The last report of casualties received by the War Department from the Philippines arrived early in the morning of May 6. Through this date, Sergeant Stanley L. Zaronsky had not been reported as a casualty. The War Department will consider the persons serving in the Philippine Islands as ‘missing in action’ from the date of the surrender of Corregidor, May 7, until definite information to the contrary is received. “Efforts to secure prisoner of war lists from the Philippines have not been successful to this date due to the lack of communication and the fact that the Japanese Government has not yet given permission for the Swiss representative and the International Red Cross delegates to make visits to prisoner of war camps in the islands. When the lists of prisoners are received, we will clear the name of your son and send you any additional information that we may have.”

“I am deeply distressed to inform you corrected report just received states your son Corporal Thomas Davenport who was previously reported missing in action was killed on twenty eight May 1942 in the Philippine Islands period the secretary of war asks that I express his deep sympathy in your loss and his regret that unavoidable circumstances made necessary the unusual lapse in time in reporting your sons death to you confirming letter follows.

His mother received this letter – dated June 4, 1945, from the War Department.

“It is with profound regret that I confirm the recent telegram informing you of the death of your son, Sergeant Stanley L. Zaronsky, 15,056,631, Infantry, who was previously reported missing in action.

“An official report has now been received which states that he was killed in action in the Philippine Islands on 12 May 1942. 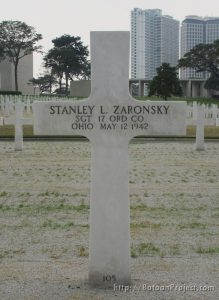