“According to War Department records, you have been designated as the emergency addressee of Private Delbert Talbott, 39,231,797, who, according to the latest information available, was serving in the  Philippine Islands at the time of the final surrender.

Hospitalized: Thursday – 18 June 1942 – dysentery
– assigned to Building 1
– apparently he was moved to Building 14
Died:
– Wednesday – 2 September 1942 – dysentery
– approximate time of death – 11:00 AM
– he was the 1,588 POW to die at the camp
– the medical staff indicated he had no possessions
– July 1942 – while he was in the hospital his parents received a second message from the War Department. The following is an excerpt from it.

“The last report of casualties received by the War Department from the Philippines arrived early in the morning of May 6. Through this date, Private Delbert Talbott had not been reported as a casualty. The War Department will consider the persons serving in the Philippine Islands as “missing in action” from the date of the surrender of Corregidor, May 7, until definite information to the contrary is received.

Buried:
– Cabanatuan Camp Cemetery
Burial Detail:
– POWs worked in teams of four men to bury dead
– carried as many as six dead POWs in litters to the cemetery
– buried in graves that contained 16 to 20 bodies
– July 1943 – family notified of his death

“= J A ULIO THE ADJUTANT GENERAL=”

– the family received a letter from the War Department within weeks

“It is with profound regret that I confirm the recent telegram informing you of the death of your son, Private Delbert Talbott, 39,231,797, Infantry, who was previously reported missing in action.

“An official report has now been received which states that he was killed in action in the Philippine Islands on 28 May 1942. 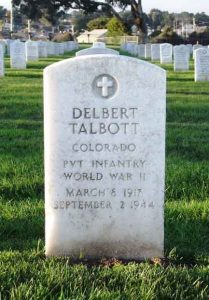