“According to War Department records, you have been designated as the emergency addressee if Private Daniel J. Sparling, 39,300,619, who, according to the latest information available, was serving in the  Philippine Islands at the time of the final surrender.

– Cabanatuan
– original name – Camp Pangatian
– Philippine Army Base built for 91st Philippine Army Division
– put into use by the Japanese as a POW camp
– actually three camps
– Camp 1: POWs from Camp O’Donnell sent there in an attempt to lower the death rate
– Camp 2: two miles away
– all POWs moved from there because of a lack of water
– later used for Naval POWs
– Camp 3: six miles from Camp 2
– POWs from Corregidor sent there
– camp created to keep Corregidor POWs separated from Bataan POWs
– Corregidor POWs were in better shape
– POWs from Camp 3 later consolidated into Camp 1
– Camp Administration:
– the Japanese left POWs to run the camp on their own
– Japanese entered camp when they had a reason
– in early June, four POWs were caught who tried to escape
– they were made to dig their own graves and stand in them facing a firing squad
– after they were shot, a Japanese officer took his pistol and shot into each grave
– Barracks:
– each barracks held 50 men
– often held between 60 and 120 men
– slept on bamboo slats without mattresses, covers, and mosquito netting
– diseases spread easily
– no showers
– Blood Brother Rule
– POWs put into groups of ten
– if one escaped the others would be executed
– housed in same barracks
– worked on details together
– Morning Roll Call:
– stood at attention
– frequently beaten over their heads for no reason
– 26 May 1942 until November 1942
– when POWs lined up for roll call, it was a common practice for Japanese guards to kick the POWs in their shins with their hobnailed boots
– did this if they didn’t like how the line looked
– Meals:
– daily POW meal – 16 ounces of cooked rice, 4 ounces of vegetable oil, sweet potato or corn
– sometimes rotten fish was given to the POWs which was crawling with maggots and lice
– most of the food the POWs grew went to the Japanese
– Work Details:
– Two main details
– the farm and airfield
– farm detail
– POWs cleared land and grew camotes, cassava, taro, sesame, and various greens
– Japanese took what was grown
– Guards:
– Big Speedo – spoke little English
– in charge of the detail
– fair in the treatment of POWs
– spoke little English
– to get POWs to work faster said, “speedo”
– Little Speedo
– also used “speedo” when he wanted POWs to work faster
– punished the POWs by making them kneel on stones
– Smiley
– always smiling
– could not be trusted
– meanest of guards
– Airfield Detail:
– Japanese built an airfield for fighters
– POWs cut grass, removed dirt, and leveled ground
– at first moved dirt in wheelbarrows
– later pushed mining cars
– Guards:
– Air Raid
– in charge
– usually fair but unpredictable
– had to watch him
– Donald Duck
– always talking
– sounded like the cartoon character
– unpredictable – beat POWs
– POWs told him that Donald Duck was a big American movie star
– at some point, he saw a Donald Duck cartoon
– POWs stayed away from him when he came back to camp
– Work Day: 7:00 A.M. to 5:00 P.M.
– worked 6 days a week
– had Sunday off
– Other Details:
– work details sent out to cut wood for POW kitchens and plant rice
– they also were frequently hit with a pick handle, for no reason, as they counted off
– POWs on the rice planting detail were punished by having their faces pushed into the mud and stepped on their heads to drive their faces deeper into the
mud
– the POWs had to go into a shed to get the tools, as they came out, they were hit on their heads
– if the guards on the detail decided the POW wasn’t doing what he should be doing, he was beaten
– many POWs on details were able to smuggle in medicine, food, and tobacco into the camp
– Burial Detail
– POWs worked in teams of four
– carried 4 to 6 dead to the cemetery at a time in litters
– a grave contained from 15 to 20 bodies
– the bodies floated in the graves because of the high water table
– the POWs held the body down with a pole while it was covered with dirt
– Camp Hospital:
– 30 Wards
– each ward could hold 40 men
– frequently had 100 men in each
– two tiers of bunks
– sickest POWs on the bottom tier
– each POW had a 2 foot by 6-foot area to lie in
– Zero Ward
– given the name, because it had been missed when counting wards
– became ward where those who were going to die were sent
– fenced off from other wards
– Japanese guards would not go near it
– POWs sent there had little to no chance of surviving
– medical staff had little to no medicine to treat sick
– many deaths from disease caused by malnutrition
– hospitalized – Wednesday – 10 June 1942 – malaria & dysentery
– discharged – no date was given
– 26 June 1942 – six POWs executed
– had left camp to buy food
– caught returning to camp
– beaten and tied to a fence in front of Japanese Headquarters
– tied in such a way they could not stand or sit down
– no one allowed to give them food or water
– no one was allowed to give them hats against the sun
– after 48 hours, they were cut down
– four were executed on the duty side of the camp
– two were executed on the hospital side of the camp
– June – first POWs developed diphtheria
– July 1942 – diphtheria spread throughout the camp
– 130 POWs died before the Japanese released any anti-toxin for treatment
– A second letter was sent to the families of men captured on Bataan and Corregidor. Part of it is as follows:

“The last report of casualties received by the War Department from the Philippines arrived early in the morning of May 6. Through this date, Private Daniel J. Sparling had not been reported as a casualty. The War Department will consider the persons serving in the Philippine Islands as ‘missing in action’ from the date of the surrender of Corregidor, May 7, until definite information to the contrary is received.

– 12 September 1942 – three POWs escaped
– 21 September 1942 – recaptured and brought back to the camp
–  their feet were tied together
– their hands were crossed behind their backs and tied with ropes
– a long rope was tied around their wrists and they were suspended from a rafter
–  their toes barely touched the ground
– their arms bore all the weight of their bodies
– they were subjected to severe beatings by the Japanese guards
– the punishment lasted three days
– next, they were tied hand and foot and placed in the cooler for 30 days
– the diet was rice and water
– one of the three POWs was severely beaten by a Japanese lieutenant
– 29 September 1942 – three POWs were executed by Japanese
– stopped by American security guards
– the guards were to stop escapes so other POWs would no be executed
– the Japanese heard the commotion
– during questioning, the POWs were severely beaten for two and a half hours
– one man’s jaw was broken
– taken to the main gate and tied to posts
– their clothing was torn off them
– beaten for the next 48 hours
– at the end of three days, they were cut down and thrown into a truck
– POWs were shot in a clearing in sight of the camp
Died:
– 21 December 1942 – dysentery & beriberi
– approximate time of death – 2:00 PM
– he was the 2,506 POW to die at the camp
Buried:
Cabanatuan Camp Cemetery
– 28 May 1943 – Daniel’s name was on a list of men released by the War Department of being Japanese Prisoners of War
– his parents had been told he was a POW weeks earlier

REPORT JUST RECEIVED THROUGH THE INTERNATIONAL RED CROSS STATES THAT YOUR SON PRIVATE DANIEL J SPARLING IS A PRISONER OF WAR OF THE JAPANESE GOVERNMENT IN THE PHILIPPINE ISLANDS LETTER OF INFORMATION FOLLOWS FROM THE PROVOST
ULIO THE ADJUTANT GENERAL.

– Within days of receiving the first message, his parents received the following letter:

– it appears his family did not learn of his death until December 1944 or in January 1945
Reburied:
– Golden Gate National Cemetery – San Bruno, California
– Section: F Site: 53
– he shares his grave with S/Sgt. Walter Lee since their remains could not be separated
– Daniel’s brother, Charles, was killed in action on May 24, 1944.
– 10 February 1945 – his family was informed that his brother, William, would be returned to the U.S.
– he was assigned duty in the United States for the duration of the war. 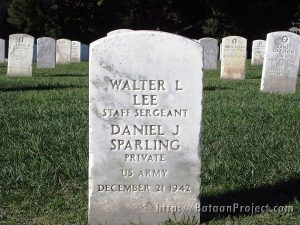