– Anton Cichy said, “For the first few days there were 1,800 of us together in one hold. I don’t know how big the hold was but we had to take turns to sit down. We were just kind of stuck together.”

– Calvin Graef said about the conditions in the hold, “We were packed in so tight most men couldn’t get near the cans. And, of course, it was a physical impossibility for the sick in the back of the hold, the men suffering the tortures of diarrhea and dysentery. We waded in fecal matter.”

– POWs hot-wired ventilation system into the lighting system
– Japanese had removed lights but did not turn off the power
– had fresh air for two days
– when the Japanese discovered what had been done, they turned power off
– heat in hold rises and the POWs developed heat blisters
– Japanese acknowledged they had to do something or the POWs would die
– transfer POWs into the second hold
– Sailed: 20 October 1944 to Manila
– Arrived: Manila – 20 October 1944
– Sailed: 21 October 1944
– Sunk: Tuesday – 24 October 1944

– Cichy said, “The Japs told us that they’d be in Formosa the next day to pick up some cargo. They had to make room on deck so they tossed a whole bunch of life preservers down into the hold. I held onto one but didn’t think anything about it.”

– 5:00 P.M. – American submarines spotted in the Bashi Channel of South China Sea
– about 5:40 P.M.
– POWs on deck prepared dinner for POWs in holds
– about half of the POWs had been fed
– POWs on deck hear bells and sirens
– watched as Japanese ran to the bow of the ship
– the torpedo passed in front of the ship
– Japanese ran to the stern
– a torpedo passed behind the ship
– the ship hit by two torpedoes amidships

– Cichy recalled, “When the torpedo hit everybody in the hold hollered ‘Hit her again!’ We wanted to get it over with.”

– Lt. Robert S. Overbeck said of the incident: “The third torpedo struck squarely amidships and buckled the vessel but it didn’t break in two.”

– Overbeck also commented on the reaction of the POWs in the holds. “For about five seconds there was panic among us, but there were five or six chaplains who prayed fervently and quieted the men.”

– Cichy recalled, “The Japs closed the hatches and left the ship in lifeboats. They must have forgot about the prisoners on deck who had been cooking. When the Japs were off the boat, the cooks opened the hatches and told us to come up. I was just under the deck, but there were a lot of guys down below. One of them escaped by simply walking into the water from a hole in the bulkhead. He was Lt. Robert S. Overbeck, Baltimore.”

– Some POWs climbed on deck and reattached rope ladders

– Cichy stated, “The Japs had already evacuated ship. They had a destroyer off the side, and they were saving their own.”

– On the ship’s deck an American major spoke to the POW s, “Boys, we’re in a helluva a jam – but we’ve been in jams before. Remember just one thing: We’re American soldiers. Let’s play it that way to the very end of the script.” Right after he spoke, a chaplain said to them, “Oh Lord, if it be thy will to take us now, give us the strength to be men.”

– Overbeck also stated, ” We broke into the ship’s stores to get food, cigarettes, and water — mainly water, we were so thirsty. All of us figured we were going to die anyway. The Japs ships, except for the destroyers, had disappeared. All we had were life belts which the Japanese had fortunately thrown down the hold the day before.

“But as darkness settled and our hopes for life flickered, we felt absolutely no resentment for the Allied submarine that had sent the torpedo crashing in. We knew they could not tell who was aboard the freighter, and as far as the Navy could have known the ship could have been carrying Jap troops. The men were brave and none complained.

“Some slipped off their life preservers and with a cherry ‘so long’ disappeared.” The ship sank lower into the water

– Cpl. Glenn Oliver recalled that he was on the port side
– he walked back to see the damage caused by the torpedo
– the deck was peeled back
– he could see water inside the hold washing back and forth
– when a wave went under the ship, the stern would wobble up and down
– he heard the steel tearing
– shortly after this, the stern tore off and sunk
– the rest of the ship began to take on water quickly
– many men on deck tried to find something that floated
– others sat calmly on the deck.

– Graef said, “Men without any fear at all, just stayed where they were. They sat down, got water to drink, got rice to eat…they couldn’t swim. The majority went down with the ship.”

– POWs took to the water on anything that would float
– waves were as high as five feet because a storm had just passed
– In the water, many POWs swam to a nearby Japanese destroyer put were pushed underwater with long poles.

– Of this, Glenn Oliver said, “They weren’t picking up Americans. A lot of the prisoners were swimming for the destroyer, but the Japanese were pushing them back into the water.”

– He recalled. “I kept getting bumped by guys wearing life jackets. Nobody wanted to share my planks. I didn’t ask them.”

– three POWs found an abandoned lifeboat and managed to climb in
– they found it had no oars
– the rough seas prevent them from maneuvering the boat to help other POWs
– the survivors stated the Arisan Maru and sank sometime after dark on Tuesday, 24 October 1944

– Oliver – who was not in the boat stated he heard men using what he called “GI whistles” to contact each other “They were blowing these GI whistles in the night. This weird moaning sound. I can’t describe it.”

– only nine POWs of 1803 POWs survived the sinking
– four POWs who survived the night recaptured by the Japanese
– one of these men died in a POW camp
Died:
– Tuesday – 24 October 1944
– his parents learned of his death in 1945:

“The International Red Cross has transmitted to this government an official list obtained from the Japanese government, after long delay, of American prisoners of war who were lost while being transported northward from the Philippine islands on a Japanese ship which was sunk on Oct. 24, 1944.

“It is with deep regret that I inform you that your son was among those lost when the sinking occurred and, in the absence of any probability of survival, must be considered to have lost his life. He will be carried on records of the war department as killed in action Oct. 24, 1944. The evidence of his death was received June 16, 1945.

“It is with deep regret that I inform you that your son, PFC Manuel F. Ortez, 39, 231, 899, 194th Tank Battalion, was among those lost when that sinking occurred and, in the absence of any probability of survival, must be considered to have lost his life. He will be carried on the records of the War Department as Killed in Action 24 October 1944. The evidence of this death was received 16 June 1945, the date upon which his pay will terminate and accounts will be closed.

“The information available to the war department is that the vessel sailed from Manila on October 11, 1944, with 1775 prisoners of war aboard. On October 24 the vessel was sunk by submarine action in the south China Sea over 200 miles from the Chinese coast which was the nearest land. Five of the prisoners escaped in a small boat and reached the coast. Four others have been reported as picked up by the Japanese by whom all others aboard are reported lost. Absence of detailed information as to what happened to the other individual prisoners and known circumstances of the incident lead to a conclusion that all other prisoners listed by the Japanese as aboard the vessel perished.

“It is with deep regret that I must notify you of this unhappy culmination of the long period of anxiety and suffering you have experienced. You have my heartfelt sympathy. 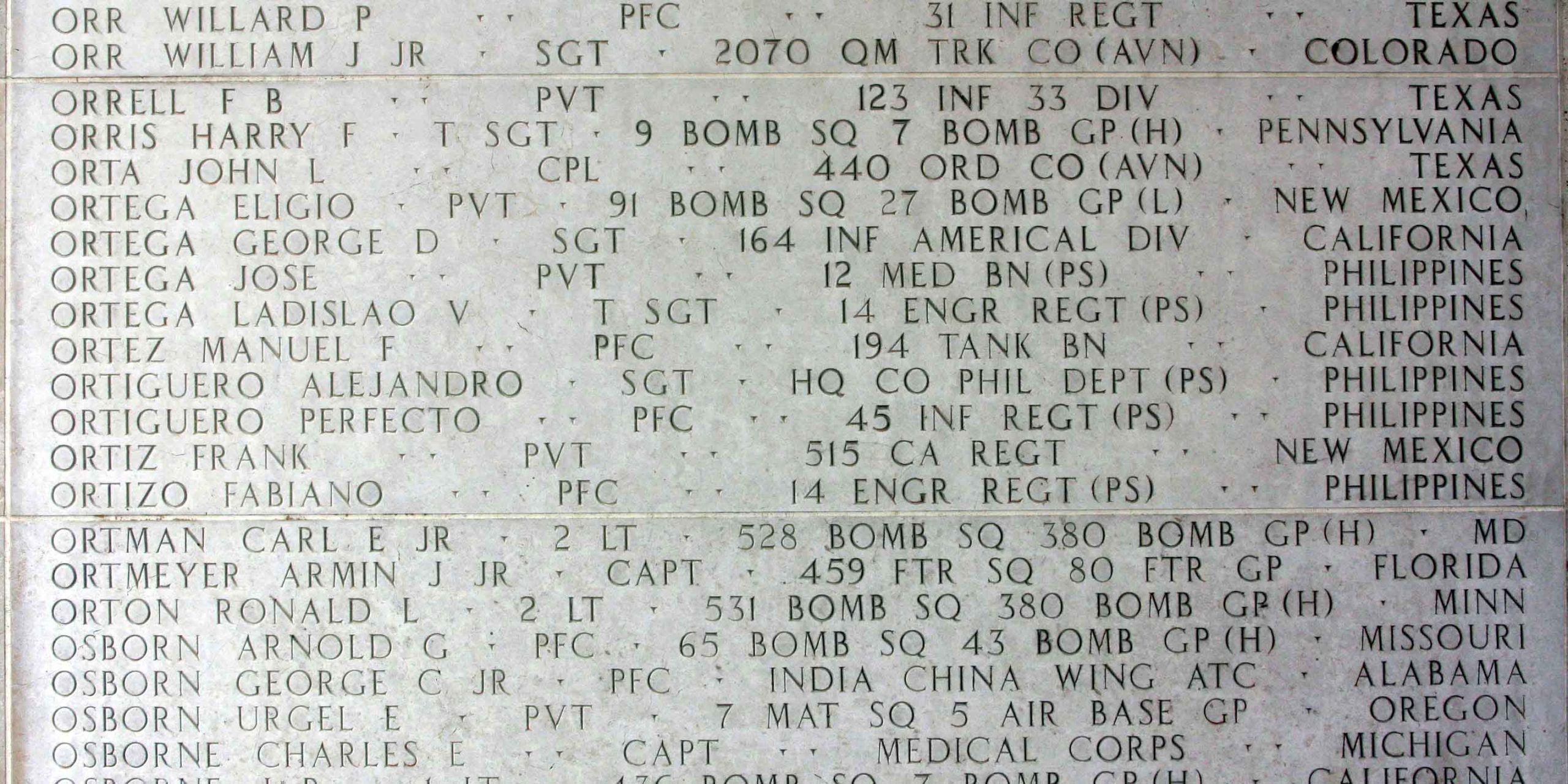