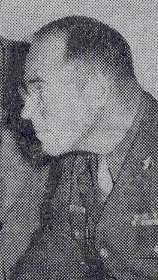 Pvt. Donald Clifford Norris
Born: 5 December 1911 – New London, Minnesota
Parents: Nathan G. Norris and Eva Libby-Norris
Siblings: 6 sisters, 5 brothers
Hometown: Roseville, Minnesota
Home: 1506 Hague Street – St. Paul, Minnesota
– living on own at 19 years old
– 1940 – living in Wausau, Wisconsin
Occupation: salesman
Selective Service Registration: 16 October 1940
– Next of Kin: Eva Norris – mother
Inducted:
– U. S. Army
– 7 April 1941 – Milwaukee, Wisconsin
Training:
– Fort Knox, Kentucky
– Basic Training
– the training was done with First Armored Division
– soldiers rushed through basic training
– his basic training was three weeks long so he could start medical training
Typical Day
– 6:15 with reveille
– most of the soldiers were up before this since they wanted to wash and dress.
– 7:00 to 8:00 – breakfast
– 8:00 to 8:30 – calisthenics
– Afterward, the tankers went to various schools within the company.
– training in using and maintaining 30 and 50 caliber machine guns and pistols
– training in map reading, care of personal equipment, military courtesy, and training in tactics.
– 11:30 the soldiers stopped what they were doing and cleaned up for mess – – Noon to 1:00 P.M. – lunch
– Afterward, they attended the various schools which they had been assigned to schools, such as mechanics, tank driving, radio operating
– medics received training from the battalion’s doctors since the Army believed in hands-on training
– some classes were available to medics
– a limited number of classes were available to the medics
– 4:30 – the soldiers called it a day and returned to their barracks and put on dress uniforms
– 5:00 – retreat
– 5:30 – dinner
– After dinner, they were off duty
– 9:00 P.M. – lights were out
– soldiers but did not have to turn in
– 10:00 P.M. – Taps was played.

“According to War Department records, you have been designated as the emergency addressee of Private Donald C. Norris, 36,206,243, who, according to the latest information available, was serving in the  Philippine Islands at the time of the final surrender.

– In July 1942, his parents received a second message from the War Department.
– The following is an excerpt from it.

“The last report of casualties received by the War Department from the Philippines arrived early in the morning of May 6. Through this date, Private Donald C. Norris had not been reported as a casualty. The War Department will consider the persons serving in the Philippine Islands as “missing in action” from the date of the surrender of Corregidor, May 7, until definite information to the contrary is received.

– Bilibid Prison
– admitted – 10 October 1942
– malaria
– Discharged: not known
– sent to Camp O’Donnell
– Camp O’Donnell
– sent there to work as a medic
– Donald cared for Filipinos
– most of the Filipinos were released after taking an oath of allegiance
– Bilibid Prison
– 28 January 1943 – arrived from Camp O’Donnell
– assigned to the medical detachment
– 18 February 1943 – transferred to Cabanatuan Camp #3
– worked as a medic
– Camp 3 merged into Camp 1
– 9 July 1943 – his name appeared on a list -released by the War Department – of men known to be Japanese Prisoners of War
– his family learned he was a POW weeks earlier

Hell Ship:
– Kenwa Maru
– POWs left Cabanatuan in early March 1944
– Boarded: 6 March 1944
– Sailed: Same day
– Arrived: Takao, Formosa – 13 March 1944
– Sailed: 15 March 1944
– Arrived: Moji, Japan – 22 March 1944
– Japan:
– Sendai #5-B
– POWs worked in a mine owned by Mitsubishi
– Red Cross medical supplies and medicines were withheld from POWs
– POWs were beaten for the slightest reasons
– Omori Camp
– POWs worked on docks
– food and water rations randomly withheld from POWs
– no proper washroom facilities
– POWs kicked and beaten
– Red Cross medical supplies and medicines withheld from POWs
– Sendai #10-B
– 20 May 1945 – camp opened
– Work: steel mill
– POWs worked without proper safety devices and were exposed to excessive heat and gaseous fumes
– many POPs became sick or were injured
– civilian supervisors beat POWs if they believed they were not working hard enough
– Japanese withheld clothing, medical supplies, medicines, and food from Red Cross packages
– appropriated these things for themselves
– Food:
– inadequate low-quality rice
– POWs smuggled food into the camp
– beaten if they were caught doing this
– Medical Treatment:
– POWs who reported for sick call beaten
– sick who could walk were required to work
– when they returned to camp they had to clean up the campground
– Corporal Punishment:
– POWs kicked, slapped, punched, hit with clubs and pipes
– if one POW broke a rule, the all the POWs were made to stand at attention, in the cold, for hours
Liberated: September 1945
Discharged: 10 May 1946
Married: 1 July 1946 – Marion Ryder – Atwell, Minnesota
Children: 1 son
Occupation: dairy and food inspector – Atwell, Minnesota
Died: 8 May 1995 – Sun City, Arizona