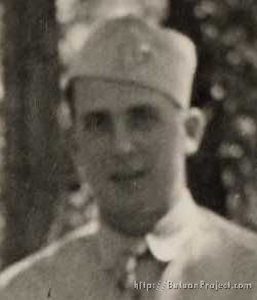 PFC Curtis Massey joined the 192nd Tank Battalion at Fort Knox, Kentucky. He was born on May 20, 1918, to Joseph M. & Lydia Massey in Clay County, Kentucky, and had two brothers and five sisters. His family’s farm, where he worked, was on the Manchester-Burning Springs Road.

When he was inducted into the army, he was living in Hamilton County, Ohio, on March 24, 1941. After joining the battalion he was assigned to the Medical Detachment of the 192nd to train as a medic.

Basic training for the selectees was rushed and in Massey’s case lasted about four weeks when he was pulled from it to start his medical training. He received hands-on training since the Army believed this was the best type of training a medic could receive. This training was done by the battalion’s medical officers. Some classes were available – which appeared to cover administrative duties – but it is not known if he attended any of the classes. He was assigned to B Company as a medic and lived in the company’s barracks. While the company trained with their tanks and reconnaissance cars, the medics learned first aid from the battalion’s doctors.

A typical day for the soldiers started at 6:15 with reveille, but most of the soldiers were up before this since they wanted to wash and dress. Breakfast was from 7:00 to 8:00 A.M., followed by calisthenics from 8:00 to 8:30. Afterward, the tankers went to various schools within the company. The classes consisted of .30 and .50 caliber machine guns, pistol, map reading, care of personal equipment, military courtesy, and training in tactics.

At 11:30 the soldiers stopped what they were doing and cleaned up for mess which was from noon to 1:00 P.M. Afterwards, they attended the various schools which they had been assigned to on January 13, such as mechanics, tank driving, radio operating. At 4:30, the soldiers called it a day and returned to their barracks and put on dress uniforms and at five held retreat and followed by dinner at 5:30. After dinner, they were off duty and lights were out at 9:00 P.M., but they did not have to turn in until 10:00 when Taps was played.

The battalion received these orders for duty in the Philippine Islands because of an event that happened during the summer. A squadron of American fighters was flying over Lingayen Gulf when one of the pilots noticed something odd. He took his plane down and identified a buoy in the water. He came upon more buoys that lined up, in a straight line for 30 miles to the northwest, in the direction of a Japanese occupied island, with a large radio transmitter, hundreds of miles away. The squadron continued its flight plane and flew south to Mariveles and then returned to Clark Field. By the time the planes landed, it was too late to do anything that day.

The company traveled west by train to San Francisco, California, and was taken by ferry to Ft. McDowell on Angel Island on the ferry the U.S.A.T General Frank M. Coxe. At Ft. McDowell, they were given physicals and inoculated for overseas duty. Those men found to have a minor medical condition were held back and scheduled to rejoin the battalion at a later date, while other men were simply replaced.
The 192nd boarded onto the U.S.A.T. Gen. Hugh L. Scott and sailed on Monday, October 27. During this part of the trip, many tankers had seasickness, but once they recovered they spent much of the time training in breaking down machine guns, cleaning weapons, and doing KP. The ship arrived at Honolulu, Hawaii, on Sunday, November 2 and had a two-day layover, so the soldiers were given shore leave so they could see the island.

On Wednesday, November 5, the ship sailed for Guam but took a southerly route away from the main shipping lanes. It was at this time it was joined by, the heavy cruiser, the U.S.S. Louisville and, another transport, the S.S. President Calvin Coolidge. Sunday night, November 9, the soldiers went to bed and when they awoke the next morning, it was Tuesday, November 11th. During the night, while they slept, the ships had crossed the International Dateline. It was also at this time the convoy stopped at Wake Island so the B-17 ground crews could disembark.

On Saturday, November 15, smoke from an unknown ship was seen on the horizon. The Louisville revved up its engines, its bow came out of the water, and it shot off in the direction of the smoke. It turned out the smoke was from a ship that belonged to a friendly country, but two other ships intercepted by the Louisville were Japanese freighters that were hauling scrap metal to Japan.

When they arrived at Guam on Sunday, November 16, the ships took on water, bananas, coconuts, and vegetables before sailing for Manila the next day. At one point, the ships passed an island at night and did so in total blackout. This for many of the soldiers was a sign that they were being sent into harm’s way. The ships entered Manila Bay, at 8:00 A.M., on Thursday, November 20, and docked at Pier 7 later that morning. At 3:00 P.M., most of the soldiers were taken by bus to Ft. Stotsenburg. Those who drove trucks drove them to the fort, while the maintenance section remained behind at the pier to unload the tanks.

At the fort, they were greeted by Colonel Edward P. King, who apologized they had to live in tents along the main road between the fort and Clark Airfield. He made sure that they had what they needed and received Thanksgiving Dinner – a stew thrown into their mess kits – before he went to have his own dinner. Ironically, November 20 was the date that the National Guard members of the battalion had expected to be released from federal service.

The members of the battalion pitched the ragged World War I tents in an open field halfway between the Clark Field Administration Building and Fort Stotsenburg. They were set up in two rows and five men were assigned to each tent. There were two supply tents and meals were provided by food trucks stationed at the end of the rows of tents.

The area was near the end of a runway used by B-17s for takeoffs. The planes flew over the tents at about 100 feet blowing dirt everywhere and the noise from the engines was unbelievable. At night, they heard the sounds of planes flying over the airfield which turned out to be Japanese reconnaissance planes. In addition, the khaki uniforms they had been issued also turned out to be a heavy material which made them uncomfortable to wear in the tropical heat.

For the next seventeen days, the tankers worked to remove cosmoline from their weapons which had been greased to protect them from rust while at sea. They also loaded ammunition belts and did tank maintenance., and prepared for maneuvers with the 194th Tank Battalion.

On December 1, the tankers were ordered to the perimeter of Clark Field to guard against Japanese paratroopers. Two members of each tank and half-track crew remained with their vehicles at all times and received their meals from food trucks.

On the morning of December 8, 1941, just ten hours after the Japanese attack on Pearl Harbor, the tankers learned about the attack. That morning, they were ordered to the perimeter of Clark Airfield to guard against paratroopers. The medics remained behind in the bivouac. At 12:45 P.M., the Japanese attacked the airfield. During the attack, the medics took cover since they had no weapons. After the attack, he and the other members of the medical detachment provided aid to the wounded and dying.

During the battle for the Philippines, Curtis would travel with various companies of the 192nd as they fought the Japanese and withdrew into the Bataan Peninsula. During this time, the Filipino and American troops were bombed and shelled constantly.

On February 5, 1942, during an air raid, Curtis was hit by a piece of shrapnel from a Japanese bomb. The shrapnel cut his spinal cord leaving him permanently paralyzed. He was taken to a Field Hospital #2 where the medical staff did what they could without adequate medical supplies.

Curtis was visited by Capt. Alvin Poweleit the chief medical officer of the 192nd Tank Battalion on February 7, 1942. Poweleit determined that it would be just a matter of time before Curtis would die from his wounds.

According to U. S. Army records, Pfc. Curtis Massey died on Monday, March 2, 1942, from his wounds. Since his final resting place is unknown, his name appears on The Tablets of the Missing at the American Military Cemetery outside Manila.