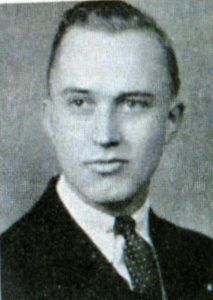 Sgt. Gerald J. Lundquist
Born: 2 March 1915 – South Dakota
Parents: Clarence & Naomi Lundquist
Hometown: 19 North Main Street – Aberdeen, South Dakota
Education: Northern State College – Aberdeen, South Dakota
– Class of 1938
Residence:
– 543 Brimhall – Saint Paul, Minnesota
– moved to Minnesota looking for work
Inducted:
– U. S. Army
– 11 April 1941 – Fort Snelling, Minnesota
Unit:
– 194th Tank Battalion
– He was assigned to one of the three tanks of Headquarters Company
Training:
– Fort Lewis, Washington
– described as constantly raining during the winter
– many men ended up in the camp hospital with colds
– Typical Day – after they arrived at Ft. Lewis
– 6:00 A.M. – first call
– 6:30 A.M. – Breakfast
– During this time the soldiers made their cots, policed the grounds around the barracks, swept the floors of their barracks, and performed other duties.
– 7:30 A.M. to 11:30 A.M. – drill
– 11:30 A.M. – 1:00 P.M. – mess
– 1:00 P.M. – 4:30 P.M. – drill
– 5:00 P.M. – retreat
– 5:30 P.M. – mess
– men were free after this
– a canteen was located near their barracks and was visited often
– the movie theater on the base that they visited.
– The theater where the tanks were kept was not finished, but when it was, the tankers only had to cross the road to their tanks.
– Saturdays the men had off, and many rode a bus 15 miles northeast to Tacoma which was the largest town nearest to the base
– Sundays, many of the men went to church and services were held at different times for the different denominations
– later the members of the battalion received specific training
– many went to Ft. Knox, Kentucky for training in tank maintenance, radio operation, and other specific jobs
– Fort Knox, Kentucky
– radio operator school
– 17 August 1941 – battalion receives overseas orders
– withdrew from maneuvers they were taking part in