According to War Department records, you have been designated as the emergency addressee of Corporal Charles E. Freeland, 34,012,636, who, according to the latest information available, was serving in the  Philippine Islands at the time of the final surrender.

“The last report of casualties received by the War Department from the Philippines arrived early in the morning of May 6. Through this date, Corporal Charles E. Freeland had not been reported as a casualty. The War Department will consider the persons serving in the Philippine Islands as ‘missing in action’ from the date of the surrender of Corregidor, May 7, until definite information to the contrary is received.

– hospitalized – 30 August 1942 – beriberi & inanition
– 12 September 1942 – three POWs escaped
– 21 September 1942 – recaptured and brought back to the camp
–  their feet were tied together
– their hands were crossed behind their backs and tied with ropes
– a long rope was tied around their wrists and they were suspended from a rafter
–  their toes barely touched the ground
– their arms bore all the weight of their bodies
– they were subjected to severe beatings by the Japanese guards
– the punishment lasted three days
– tied hand and foot and placed in the cooler for 30 days
– the diet was rice and water
– one of the three POWs was severely beaten by a Japanese lieutenant
– “Blood Brother” rule implemented
– if one POW in the group of 10 escaped, the other nine would be killed
– POWs patrolled fence to prevent escapes
– 29 September 1942 – three POWs executed by the Japanese
– stopped by American security guards
– the guards were to stop escapes so other POWs would no be executed
– the Japanese heard the commotion
– during questioning, the POWs were severely beaten for two and a half hours
– one man’s jaw was broken
– taken to the main gate and tied to posts
– their clothing was torn off them
– beaten for the next 48 hours
– at the end of three days, they were cut down and thrown into a truck
– POWs were shot in a clearing in sight of the camp
Died:
– 30 November 1942 – beriberi & inanition
– his family learned of his death in October 1943
– he was the 2,395 POW to die at the camp
– 7 February 1943 – the War Department released his name on a list of men known to be Prisoners of the Japanese
– his parents were informed he was a POW weeks earlier

“I am deeply distressed to inform you corrected report just received states your son Corporal Charles E Freeland who was previously reported a Prisoner of War was killed on thirty November 1942 in the Philippine Islands period the secretary of war asks that I express his deep sympathy in your loss and his regret that unavoidable circumstances made necessary the unusual lapse in time in reporting your sons death to you confirming letter follows. 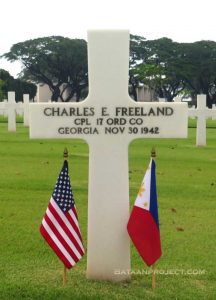