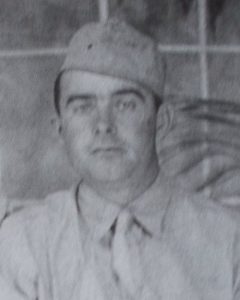 – Louisiana Maneuvers
– The entire battalion was loaded onto trucks and sent in a convoy to Louisiana while the tanks and wheeled vehicles were sent by train.
– During the maneuvers that tanks held defensive positions and usually were held in reserve by the higher headquarters. For the first time, the tanks were used to counter-attack and in support of infantry. Many of the men felt that the tanks were finally being used like they should be used and not as “mobile pillboxes.”
– Being a member of Hq Company, he worked to keep the tanks running and supplied but did not actively participate in the maneuvers.
– It was after these maneuvers that the 192nd Tank Battalion was ordered to Camp Polk, Louisiana, instead of returning to Ft. Knox. Many of the soldiers were furloughs home and get their affairs in order. Men 29 years old or older were allowed to resign from federal service
– replacements for these men came from 753rd Tank Battalion
– the 192nd also got the tanks of the 753rd and some came from the Third Armored Division

The reason for this move was an event that took place in the summer of 1941. A squadron of American fighters was flying over Lingayen Gulf when one of the pilots noticed something odd. He took his plane down and identified a buoy in the water. He came upon more buoys that lined up, in a straight line for 30 miles to the northwest, in the direction of a Japanese occupied island, with a large radio transmitter, hundreds of miles away. The squadron continued its flight plane and flew south to Mariveles and then returned to Clark Field. When the planes landed, it was too late to do anything that day.
The next day – when another squadron of planes was sent to the area – the buoys had been picked up – and a fishing boat was seen making its way toward shore carrying the buoys under a tarp. Since communication between the Navy and Air Corps was poor, the boat escaped. It was at that time the decision was made to build up the American military presence in the Philippines.

Transit:
– Fort McDowell, Angel Island, California
– ferried to island on U.S.A.T. General Frank M. Coxe
– received physicals from medical detachment – 25 October 1941 – 26 October 1941
– men with minor health issues held back and scheduled to rejoin the battalion at a later date
– other men simply replaced
Overseas Duty:
– U.S.A.T. Gen. Hugh L. Scott
– Sailed: San Francisco – Monday – 27 October 1941
– Arrived: Honolulu, Hawaii – Sunday – 2 November 1941
– remained in Hawaii until other ships in convoy arrived
– Sailed: Wednesday – 5 November 1941
– took a southern route away from main shipping lanes
– joined by the heavy cruiser, the U.S.S. Louisville and the transport, S.S. President Calvin Coolidge
– Sunday – 9 November 1941 – crossed International Dateline
– soldiers woke up on Tuesday – 11 November 1941
– stopped at Wake Island for supplies and dropped off B-17 ground support crews
– 15 November 1941 – smoke from ship spotted on the horizon
– The Louisville revved its engine, its bow came out of the water, and it shot off in the direction of the smoke
– the smoke was from a friendly country
– the Louisville also intercepted two other ships that were Japanese freighters carrying scrap metal to Japan
– Arrived: Guam – Sunday 16 November 1941
– a ship loaded with water, bananas, coconuts, and vegetables
– Sailed: next day
– passed Japanese held island in total blackout
– Arrived: Thursday – 20 November 1941 – Manila Bay – 7:00 A.M.
– soldiers disembark ship three hours after arrival
– boarded buses for Ft. Stotsenburg
– maintenance section remained behind to unload tanks from ship
Stationed:
– Ft. Stotsenburg
– Gen. Edward P. King met the soldiers when they arrived
– apologized to soldiers about living conditions
– lived in tents along the main road between fort and Clark Airfield
– made sure they all had Thanksgiving Dinner before he had his dinner
– their dinner was a stew thrown into their mess kits

Note: The members of the battalion pitched the ragged World War I tents in an open field halfway between the Clark Field Administration Building and Fort Stotsenburg. The tents were set up in two rows and five men were assigned to each tent. There were two supply tents and meals were provided by food trucks stationed at the end of the rows of tents.