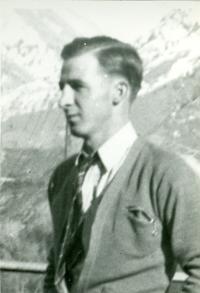 “According to War Department records, you have been designated as the emergency addressee if Technician Fifth Grade Von H. Baxter, 39,676,281, who, according to the latest information available, was serving in the  Philippine Islands at the time of the final surrender.

– 1 June 1942 – Japanese began the transfer of POWs to the new camp
– 4 June 1942 – transferred completed
– Baxter was considered too ill to be moved, so he remained behind at Camp O’Donnell
-his attending doctor was Capt. Alvin Poweleit of the 192nd Tank Battalion
Died:
– Saturday – 4 July 1942 – dysentery
– he was the 1,454 POW to die in the camp
– Around the time of his death, his family received a second message from the War Department. This is an excerpt from it.

“The last report of casualties received by the War Department from the Philippines arrived early in the morning of May 6. Through this date, Technician Fifth Grade Von H. Baxter had not been reported as a casualty. The War Department will consider the persons serving in the Philippine Islands as “missing in action” from the date of the surrender of Corregidor, May 7, until definite information to the contrary is received. 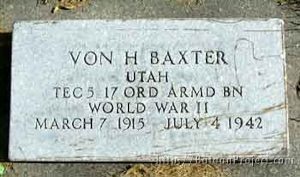