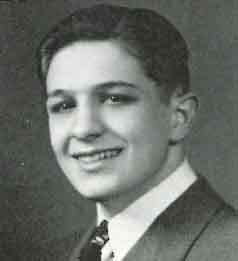 S/Sgt. Louis G. Kyriazopulos
Born: 6 September 1919 – River Grove, Illinois
Parents: Charles & Martha Kyriazopulos
Siblings: 3 sisters, 2 brothers
Home:
– 2826 North Thatcher Avenue, River Grove, Illinois
Note- When he was 13 years old, his family’s restaurant was being robbed. He was asleep in their apartment above the business when one of the robbers fired his gun and woke him. He grabbed his father’s shotgun and aimed it from the window at one of the lookouts outside the business and wounded him in the arm. The robbers quickly left and he fired the other shell spraying the car, which was later found abandoned, with pallets.
Education:
– River Grove School
– Proviso Township High School
– Class of 1936
– attended college for three years
Employment: Self-employed
Selective Service Registration: 16 October 1940
Contact Person: James Kyriazopulos – brother
Inducted:
– 29 August 1941 – Chicago, Illinois
– U. S. Army
Serial Number: 36047673
Training:
– Unknown
Unit: 501st Anti-Aircraft Artillery Battalion
Engagements:
– Attu Island
– Aleutian Islands
– 11 May 1943 – U.S. Troops landed
Killed in Action:
– May 1943
Buried:
– Mount Emblem Cemetery – Elmhurst, Illinois
– Section: L Lot: 450 Grave: 1
Medals:
– Purple Heart
*Note: In May 1946, the remains of all Americans killed on Attu Island were
returned to their families or reburied at Fort Richardson, Alaska. 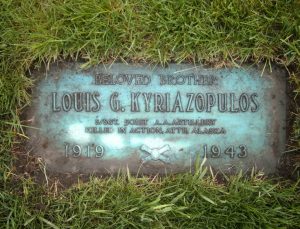