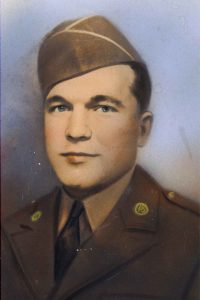 Note: The new company was the largest company in the battalion and divided into a staff platoon, a reconnaissance platoon, a maintenance platoon, a motor platoon, and the usual cooks and clerks that every company had. Men were assigned various jobs which included scouts, radio operators, mechanics, truck drivers, and other duties.  Men were also sent to specialty schools with training in areas like tank mechanic, radio, automotive mechanic, and small and large arms.

Note: The reason for this move was an event that took place in the summer of 1941. A squadron of American fighters was flying over Lingayen Gulf when one of the pilots noticed something odd. He took his plane down and identified a buoy in the water. He came upon more buoys that lined up, in a straight line for 30 miles to the northwest, in the direction of a Japanese occupied island, with a large radio transmitter, hundreds of miles away. The squadron continued its flight plane and flew south to Mariveles and then returned to Clark Field. When the planes landed, it was too late to do anything that day.

The next day – when another squadron was sent to the area – the buoys had been picked up by a fishing boat that was seen making its way toward shore. Since communication between the Air Corps and Navy was poor, the boat escaped. It was at that time the decision was made to build up the American military presence in the Philippines.

– Fort McDowell, Angel Island, California
– ferried to island on U.S.A.T. General Frank M. Coxe
– received physicals from medical detachment – 25 October 1941 – 26 October 1941
– men with minor health issues held back and scheduled to rejoin the battalion at a later date
– other men simply replaced
Overseas Duty:
– Boarded: U.S.A.T. Gen. Hugh L. Scott
– Sailed: Monday – 27 October 1941 – San Francisco, California
– Arrived: Sunday – 2 November 1941 – Honolulu, Hawaii
– Sailed: Wednesday – 5 November 1941
– took a southerly route away from main shipping lanes
– joined by the heavy cruiser, the U.S.S. Louisville and the transport the S.S. President Calvin Coolidge
– Sunday – 9 November 1941 – crossed International Dateline
– woke up on Tuesday – 11 November 1941
– at some point, the convoy stopped at Wake Island for supplies and to drop B-17 ground support crews
– Arrived: Sunday – 16 November 1941 – Guam
– loaded bananas, coconuts, vegetables, and water
– Sailed: Next Day
– Arrived: Manila Bay – Thursday – 20 November 1941 – about 8:00 A.M.
– taken to St. Stotsenburg – arrived about 3:30 P.M.
– General Edward King greeted them and apologize about their living quarters
– made sure that the soldiers had Thanksgiving dinner – a stew thrown into their mess kits before they he had his own

Note: The members of the battalion pitched the ragged World War I tents in an open field halfway between the Clark Field Administration Building and Fort Stotsenburg. The tents were set up in two rows and five men were assigned to each tent. There were two supply tents and meals were provided by food trucks stationed at the end of the rows of tents.

Daily meals consisted of seven spoonfuls of water and one fourth a cup of very poor quality watery rice a day. To supplement their diets, the prisoners also ate dog meat, radishes, potato greens, and seaweed. To get a meal, when entering the food line, the POWs had to shout out their number, in Japanese, and another man would put a nail in a hole opposite the man’s number on a wooden board. The nails remained on the board until all the POWs had been fed and then were removed before the next meal.

Corporal punishment was an everyday occurrence at the camp. The guards beat the POWs for the slightest reason and continued until the POW was unconscious. The man was then taken to the guardhouse and put in solitary confinement without food or water for a long period of time.

On one occasion in November 1944, shirts had been stolen from a bundle, sent by the British Red Cross, from a building. The Japanese ordered all the POWs to assemble and told them that they would not be fed until the shirts were returned. The men who stole the shirts returned the shirts anonymously, and the POWs received their meal at 10:00 P.M.

During the winter, the POWs, being punished, were made to stand at attention and had water thrown on them as they stood in the cold, or they were forced to kneel on bamboo poles. It is known that the POWs were made to stand in water and shocked with electrical current. At some point, two POWs were tied to a post and left to die. This was done they had violated a camp rule.

Life at Fukuoka #17 was hard and there were prisoners who would steal from other prisoners, especially clothing. To prevent this from happening, the POWs would “buddy-up” with each other. While one man was working in the mine, the POW who was not working would watch the possessions of the other man.

In addition, the sick were forced to work. The Japanese camp doctor allowed the sick, who could walk, to be sent into the mine. Men who had one good arm were made to lift heavy loads. He also took the Red Cross medical supplies meant for the POWs for his own use and failed to provide adequate medical treatment. Food that came in the packages was eaten by the guards.