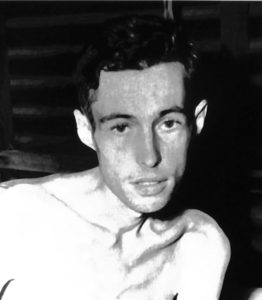 Cpl. Noel Marven Ravneberg
Born: 19 November 1916 – Devils Lake, North Dakota
Parents: Ed and Martha Ravneberg
Siblings: 1 brother
Home: No. 29 Baird Block – Devils Lake, North Dakota
Married: Martha Ravneberg – 26 May 1936 – Cass County, North Dakota
Employment: Gamble Robinson Company – Devils Lake, North Dakota
Selective Service Registration: 16 October 1940
Contact: Martha Ravneberg – mother
Inducted:
– U. S. Army
– March 1941
Unit:
– Medical Detachment, 194th Tank Battalion
Training:
– Fort Lewis, Washington
– motorcycle messenger
– described as constantly raining during the winter
– many men ended up in the camp hospital with colds
– Typical Day – after they arrived at Ft. Lewis
– 6:00 A.M. – first call
– 6:30 A.M. – Breakfast
– During this time the soldiers made their cots, policed the grounds around the barracks, swept the floors of their barracks, and performed other duties.
– 7:30 A.M. to 11:30 A.M. – drill
– 11:30 A.M. – 1:00 P.M. – mess
– 1:00 P.M. – 4:30 P.M. – drill
– 5:00 P.M. – retreat
– 5:30 P.M. – mess
– men were free after this
– a canteen was located near their barracks and was visited often
– the movie theater on the base that they visited.
– The theater where the tanks were kept was not finished, but when it was, the tankers only had to cross the road to their tanks.
– Saturdays the men had off, and many rode a bus 15 miles northeast to Tacoma which was the largest town nearest to the base
– Sundays, many of the men went to church and services were held at different times for the different denominations
– later the members of the battalion received specific training
– many went to Ft. Knox, Kentucky for training in tank maintenance, radio operation, and other specific jobs

“He would stand out behind our barracks in the pitch dark waiting for men to pass them on the way to the latrine. We never knew when he was there, or where he was until he shouted at us for not bowing. One night he had sixteen of us out there slapping each other for 45 minutes. It seems kind of funny now, looking back, but it wasn’t at the time.”

– Taihoku
– 7 July 1945 – hospitalized with beriberi
– in camp at the end of the war
– a Japanese officer came into the camp and announced their food ration would be doubled and the POws no longer had work
– Americans entered camp and Noel and six other former POWs were flown to Manila
– he weighed 90 pounds when he was liberated
– his usual weight was 165 pounds
Liberated: September 1945
– weighed: 85 pounds
– could barely walk
– weighed: 175 pounds when he was inducted
Discharged: 26 May 1946
– spent eight months in hospital
Training
– Bolivar Watch Company School – New York, New York
Education:
– Columbia University – geology
– attended night school – B.S.Degree – February 1953
– earned M.S. Degree – June 1954
Occupation: Geologist
Married:
– August 1950 – Dorothy
– second wife: Evangeline
Residence:
– moved to Washington D.C. Area
– lived in Gaithersburg, Maryland, and later Williamsburg, Virginia
Medals:
– received Purple Heart – 9 April 2002
Died:
– 19 May 2002
– congestive heart failure
Buried:
– Saint Martin’s Episcopal Church Memorial – James County, Virginia
– The photo of Noel at the top of the page was taken at Manila where he was receiving medical treatment and is courtesy of Michael Hurst of Taiwan POW Camps Society.