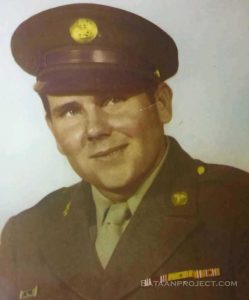 “According to War Department records, you have been designated as the emergency addressee of Private Ira C. Morgan, 38,041,101, who, according to the latest information available, was serving in the  Philippine Islands at the time of the final surrender.

– 1 June 1942 – POWs formed detachments of 100 men
– POWs marched out the gate and marched toward Capas
– Filipino people gave POWs small bundles of food
– the guards did not stop them
– At Capas, the POWs were put into steel boxcars and rode the boxcars to Calumpit
– the train stopped at Calumpit and switched onto the line to Cabanatuan
– POWs disembarked the train at 6:00 P.M. and put into a schoolyard
– fed rice and onion soup
– original name – Camp Pangatian
– Philippine Army Base built for 91st Philippine Army Division
– put into use by the Japanese as a POW camp
– actually three camps
– Camp 1: POWs from Camp O’Donnell sent there in an attempt to lower the death rate
– Camp 2: two miles away
– all POWs moved from there because of a lack of water
– later used for Naval POWs
– Camp 3: six miles from Camp 2
– POWs from Corregidor and from hospitals sent there
– camp created to keep Corregidor POWs separated from Bataan POWs
– Corregidor POWs were in better shape
– January 1943 – POWs from Camp 3 consolidated into Camp 1
Camp 1
– Camp Administration:
– the Japanese left POWs to run the camp on their own
– Japanese entered camp when they had a reason
– four POWs escaped and were recaptured
– tied to posts at the main gate and beaten
– other POWs were not allowed to give them water
– after three days their ropes were cut
– they dug their own graves
– shot by a firing squad
– a Japanese officer went to each grave and shot each man
– diphtheria also began to spread through the camp
– 130 POWs died from the disease before the Japanese issued medicine
– 26 June 1942 – six POWs were executed
– caught returning to camp after buying food
– tied to posts in a manner that they could not stand up or sit down
– no one was allowed to give them food or water
– could not give them hats to protect them from the sun
– the men were left tied to the posts for 48 hours when ropes were cut
– four of the POWs were executed on the duty side of the camp
– two were executed on the hospital side of the camp
– Blood Brother Rule
– POWs put into groups of ten
– if one escaped the others would be executed
– housed in same barracks
– worked on details together
– Barracks:
– each barracks held 50 men
– often held between 60 and 120 men
– slept on bamboo slats without mattresses, covers, and mosquito netting
– diseases spread easily
– no showers
Detail:
– assigned to the camp hospital
– 30 Wards
– each ward could hold 40 men
– frequently had 100 men in each
– two tiers of bunks
– sickest POWs on the bottom tier
– each POW had a 2-foot by 6-foot area to lie in
– Zero Ward
– given the name, because it had been missed when counting wards
– became ward where those who were going to die were sent
– fenced off from other wards
– Japanese guards would not go near it
– POWs sent there had little to no chance of surviving
– medical staff had little to no medicine to treat sick
– many deaths from disease caused by malnutrition
– In July 1942, his parents received a second message from the War Department.
– The following is an excerpt from it.

“The last report of casualties received by the War Department from the Philippines arrived early in the morning of May 6. Through this date, Private Ira C. Morgan had not been reported as a casualty. The War Department will consider the persons serving in the Philippine Islands as “missing in action” from the date of the surrender of Corregidor, May 7, until definite information to the contrary is received.

– hosppitalized
– Admitted: 31 October 1942 – camp hospital
– eye ulcer
– Discharged: Not Known
Bilibid Prison:
– assigned to the medical staff at camp at Bilidid Prison
– 20 December 1942 – returned to Cabanatuan
Cabanatuan
– 24 December 1942 – Fr. Bruttenbruck, a German Catholic priest, arrived with two trucks of presents for the POWs individual men
– each POW received a gift bag
Christmas
– each POW received the POWs received 2½ Red Cross boxes
– each box milk in some form, corn beef, fish, stew beef, sugar, meat and vegetable, tea, and chocolate
– the POWs also received bulk corn beef, sugar, meat and vegetables, stew, raisins, dried fruit, and cocoa which they believed would last them three months
– POWs also received packages from Fr. Bruttenbruck
– contained: fish, soap, cigarettes, cigars, and tobacco
– they were given four days off of work
Camp Hospital:
– assigned to the medical detachment
– 11 January 1943 – POWs watched Japanese dive bombers attack a barrio
– it was located 30 kilometers from the camp
– some of the explosions were loud
– heard scuttlebutt that 102 Filipino men, women, and children had been killed during the attack
– also heard a rumor that half of an area on Cabanatuan that had warehouses had been burned down by guerrillas
– in retaliation for the attack
– February 1943 – multiple details left camp
– some details were small while others had 1255 to 1450 POWs on them
– 7 February 1943 – POWs received Christmas telegrams
– 11 February 1943 – POWs watched movies
– Japanese propaganda newsreels and the Marx Brothers movie “Room Service”
– 12 February 1943 – noted that no POW had died in 8 days
– three POWs died the next day
– also ordered all POWs to turn in illegal radios
– 22 February 1943 – Japanese issued blankets to POWs who did not have one
– 3 March 1943 – a program started to stop the spread of dysentery
– POWs received two biscuits and some cigarettes for catching flies and rodents
– POWs had caught 320 rats and 12 million flies
– 6 April 1943- two POWs escaped
– had an hour headstart on guards
– other POWs punished by having movies night taken away that night
– the two men were recaptured
– both men were shot outside the POWs’ barracks
– 11 April 1943
– work schedule changed
– 5:30 A.M. – reveille
– 6:00 A.M. – 7:00 A.M. – breakfast
– 10:30 A.M. – returned to camp
– Noon – lunch
– 1:00 P.M. – 6:00 P.M. – work
– 6:30 P.M. – dinner
– 7:00 P.M. – roll call
– 9:00 P.M. – lol call again – lights out
– 14 April 1943 – another POW attempted to escape
– he was on the guard detail to prevent escapes
– caught by Japanese
– May 1943 – his family learned he was a Prisoner of War in a telegram from the War Department

– 23 October 1943
– sent to Cabanatuan
– assigned to Group I
Hell Ship:
– Noto Maru
– Sailed: Manila – 27 August 1944
– two torpedoes passed under the ship
– POWs chanted to be sunk
– Arrived: Moji, Japan – 9 September 1944
POW Camp:
– Japan:
– Yokohama Dispatch Camp
– Sendai #10
– 20 May 1945 – camp opened
– Work: steel mill
– POWs worked without proper safety devices and were exposed to excessive heat and gaseous fumes
– many POPs became sick or were injured
– civilian supervisors beat POWs if they believed they were not working hard enough
– Japanese withheld clothing, medical supplies, medicines, and food from Red Cross packages
– appropriated these things for themselves
– Food:
– inadequate low-quality rice
– POWs smuggled food into the camp
– beaten if they were caught doing this
– Medical Treatment:
– POWs who reported for sick call beaten
– sick, who could walk, were required to work
– when they returned to camp they had to clean up the campground
– Corporal Punishment:
– POWs kicked, slapped, punched, hit with clubs and pipes
– if one POW broke a rule, all the POWs were made to stand at attention, in the cold, for hours
Liberated: September 1945
– sent to Yokohama where he boarded the U.S.S. Rescue for a medical evaluation
– returned to the Philippines
Transport:
– U.S.S. Marine Shark
– Sailed: Manila – 10 October 1945
– Arrived: 23 October 1945 – Pearl Harbor, Hawaii
– Sailed: 24 October 1945
– after leaving Hawaii, the ship had mechanic problems and drifted for two days while repairs were made
– Arrived: 27 October 1945 – San Francisco, California
– returned there four years to the day that he had sailed from the city
– most of the POWs disembarked and taken to Letterman General Hospital for medical treatment
– sent to a veteran’s hospital closer to his home
Military Discharged: 25 May 1946
Occupation: mechanic
Died: 22 October 1997 – Alvarado, Texas
Buried:
– Mount Olivet Cemetery – Fort Worth, Texas