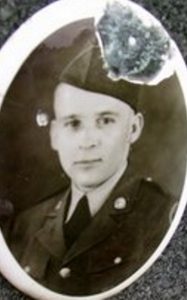 Born: 9 August 1917 – Kentucky
Parents: Claud & Lillie Price-Kistner
– father died mother married Douglas Price
Siblings: 3 brothers, 1 sister
Hometown: 405 South Sebree Avenue – Dawson Springs, Kentucky
Nickname: “Lunky”
Occupation: grocery store clerk
Education:
– Earlington High School
– Class of 1937
Enlisted:
– U. S. Army
– 20 November 1940 – Fort Knox, Kentucky
Training: Fort Knox, Kentucky
Units:
– 19th Ordnance Company
– A Company inactivated and activated as 17th Ordnance Company
– 17th Ordnance Company
Overseas Duty:
– received orders for duty in the Philippines because of an event that happened during the summer.
– a squadron of American fighters was flying over Lingayen Gulf when one of the pilots noticed something odd
– he took his plane down and identified a buoy, with a flag, in the water. He came upon more flagged buoys that lined up – in a straight line – for 30 miles
to the northwest, in the direction of a Japanese occupied island, with a large radio transmitter, hundreds of miles away.
– the squadron continued its flight plane and flew south to Mariveles and then returned to Clark Field
– when the planes landed, it was too late to do anything that day
– The next day – when planes were sent to the area – the buoys had been picked up and a fishing boat – with a tarp covering something on its deck – was
seen making its way toward shore.
– communication between the Air Corps and the Navy was poor, so the boat escaped
– the decision was made to build up the American military presence in the Philippines
Engagements:
– Battle of Luzon
– 8 December 1942 – 6 January 1942
– Battle of Bataan
– 7 January 1942 – 9 April 1942
Prisoner of War:
– 9 April 1942
– Death March
– started march at Mariveles on the southern tip of Bataan
– POWs ran past Japanese artillery firing on Corregidor
– American Artillery returned fire
– knocked out three Japanese guns
– San Fernando – POWs put into small wooden boxcars
– each car could hold eight horses or forty men
– Japanese packed 100 POWs into each boxcar
– POWs who died remained standing
– Capas – POWs leave boxcars – dead fall out of cars
– walked last ten miles to Camp O’Donnell
POW Camps:
– Philippine Islands:
– Camp O’Donnell
– unfinished Filipino Army training base
– Japanese use camp for POWs
– one water spigot for the entire camp
– as many as 50 POWs died each day
Died:
– Wednesday – 3 June 1942 – dysentery
Reburied: Earlington Cemetery – Earlington, Kentucky