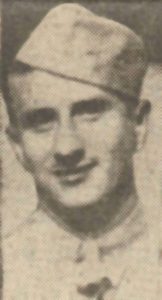 “According to War Department records, you have been designated as the emergency addressee of Sergeant Frank Jendrysik, 20,600,446, who, according to the latest information available, was serving in the Philippine Islands at the time of the final surrender.

During July 1942, his parents received another message from the War Department. The following is an excerpt from it.

“The last report of casualties received by the War Department from the Philippines arrived early in the morning of May 6. Through this date, Sergeant Fred Jendrysik had not been reported as a casualty. The War Department will consider the persons serving in the Philippine Islands as “missing in action” from the date of the surrender of Corregidor, May 7, until definite information to the contrary is received.

“I AM DEEPLY DISTRESSED TO INFORM YOU REPORT JUST RECEIVED STATES THAT YOUR SON PRIVATE FRANK JENDRYSIK WHO PREVIOUSLY REPORTED MISSING IN ACTION DIED THIRTY ONE AUGUST NINETEEN FORTY TWO IN A JAPANESE PRISONER OF WAR CAMP IN THE PHILIPPINE ISLANDS AS A RESULT OF DYSENTERY PERIOD THE SECRETARY OF WAR ASKS THAT I EXPRESS HIS DEEP SYMPATHY IN YOUR LOSS AND HIS REGRET THAT UNAVOIDABLE CIRCUMSTANCES MADE NECESSARY THE UNUSAL LAPSE OF TIME IN REPORTING YOUR SONS DEATH TO YOU CONFIRMING LETTER FOLLOWS=
“ULIO THE ADJ. GENL.”

The family received the letter which said:

“It is with deep regret that I am writing to confirm the recent telegram informing you of the death of your son, Sergeant Frank Jendrysik, 20,600,446, infantry, who was previously reported a prisoner of war.

“Information has now been received from the Japanese government through the International Red Cross stating that your son died on 24 December 1942 in a prisoner of war in the Philippine Islands from cerebral malaria.

“I  extend to you my deepest sympathy, 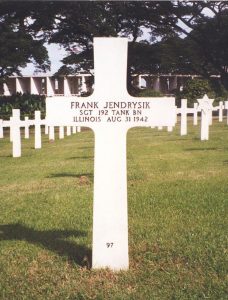