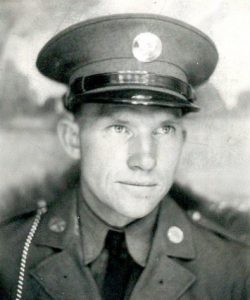 T/5 Burl Lloyd Harris
Born: 5 October 1912 – Kickapoo, Wisconsin
Parents: Alvie L. Harris & Eva B. Kyser-Harris
Siblings: 2 sisters, 2 brothers
Hometown: Liberty, Wisconsin
Occupation: worked on the family farm
Inducted:
– U. S. Army
– 17 October 1940 – Fort Lewis, Washington
Training:
– Fort Lewis, Washington
– described as constantly raining during the winter
– many men ended up in the camp hospital with colds
– Typical Day – after they arrived at Ft. Lewis
– 6:00 A.M. – first call
– 6:30 A.M. – Breakfast
– During this time the soldiers made their cots, policed the grounds around the barracks, swept the floors of their barracks, and performed other duties.
– 7:30 A.M. to 11:30 A.M. – drill
– 11:30 A.M. – 1:00 P.M. – mess
– 1:00 P.M. – 4:30 P.M. – drill
– 5:00 P.M. – retreat
– 5:30 P.M. – mess
– men were free after this
– a canteen was located near their barracks and was visited often
– the movie theater on the base that they visited.
– The theater where the tanks were kept was not finished, but when it was, the tankers only had to cross the road to their tanks.
– Saturdays the men had off, and many rode a bus 15 miles northeast to Tacoma which was the largest town nearest to the base
– Sundays, many of the men went to church and services were held at different times for the different denominations
– later the members of the battalion received specific training
– many went to Ft. Knox, Kentucky for training in tank maintenance, radio operation, and other specific jobs
– trained as a tank mechanic
Unit:
– 194th Tank Battalion

“According to War Department records, you have been designated as the emergency addressee of Technician Fifth Grade Burl L. Harris, 16,005,346, who, according to the latest information available, was serving in the  Philippine Islands at the time of the final surrender.

“The last report of casualties received by the War Department from the Philippines arrived early in the morning of May 6. Through this date, Technician Fifth Grade Burl L. Harris had not been reported as a casualty. The War Department will consider the persons serving in the Philippine Islands as “missing in action” from the date of the surrender of Corregidor, May 7, until definite information to the contrary is received.

– during 1943, his parents received another letter from the War Department

“The records of the War Department show your son, Technician Fifth Grade Burl L. Harris, 16,005,346, Infantry, missing in action in the Philippine Islands since May 7, 1942.

– sometime in 1944, his parents were informed he was a Prisoner of War

– the information came through the International Red Cross from the Japanese Government
– it is not known when his parents learned of his death
– September 1948
– T/5 Burl L. Harris’ remains were returned home on the U.S.A.T. Sergeant Morris E. Crain
Reburied:
– Viola Cemetery – Viola, Wisconsin 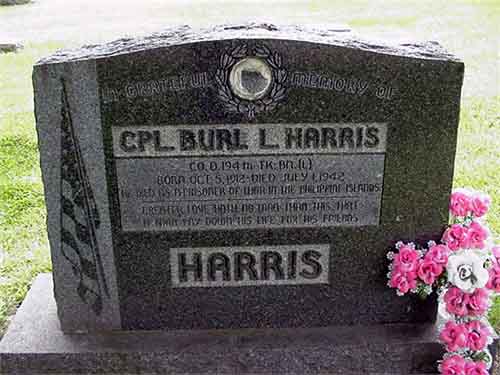