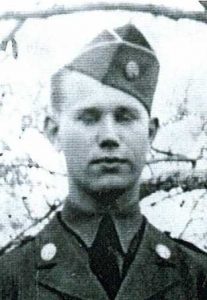 Born: 4 October 1918 – Jefferson County, Kentucky
Parents: Charles M. Graham & May Giles-Graham
Siblings: 3 sisters, 3 brothers
Home: 1610 Stevens Avenue – Louisville, Kentucky
Inducted:
– U. S. Army
– 31 March 1941 – Louisville, Kentucky
Training:
– Fort Knox, Kentucky
– first six weeks was the primary training
– Week 1: infantry drilling
– Week 2: manual arms and marching to music
– Week 3: machine gun
– Week 4: pistol
– Week 5: M1 rifle
– Week 6: field week  – training with gas masks, gas attacks, pitching tents, and hikes
– Weeks 7,8,9: Time was spent learning the weapons, firing each one, learning the parts of the weapons and their functions, field stripping and caring for
weapons, and the cleaning of weapons
– it is known that basic training was shortened so Graham’s training may have been rushed
– assigned to D Company
Typical Day
– 6:15 with reveille
– most of the soldiers were up before this since they wanted to wash and dress.
– 7:00 to 8:00 – breakfast
– 8:00 to 8:30 – calisthenics
– Afterward, the tankers went to various schools within the company.
– training in using and maintaining 30 and 50 caliber machine guns and pistols
– training in map reading, care of personal equipment, military courtesy, and training in tactics.
– 11:30 the soldiers stopped what they were doing and cleaned up for lunch
– Noon to 1:00 P.M. – lunch
– Afterward, they attended the various schools which they had been assigned to on January 13, such as mechanics, tank driving, radio operating.
– 4:30 – the soldiers called it a day and returned to their barracks and put on dress uniforms
– 5:00 – retreat
– 5:30 – dinner
– After dinner, they were off duty
– 9:00 P.M. – lights were out
– soldiers but did not have to turn in
– 10:00 P.M. – Taps was played.
– Louisiana Maneuvers
– 1 September 1941 – 30 September 1941
– sent to Camp Polk after maneuvers
– Camp Polk, Louisiana
– received orders for overseas duty as part of Operation PLUM
– PLUM acronym for Philippines, Luzon, Manila
– men 29 years old or older replaced
– replacements came from 753rd Tank Battalion
– received tanks M3 “Stuart” tanks of 753rd

Note: The reason for this move was an event that took place in the summer of 1941. A squadron of American fighters was flying over Lingayen Gulf when one of the pilots noticed something odd. He took his plane down and identified a buoy in the water. He came upon more buoys that lined up, in a straight line for 30 miles to the northwest, in the direction of a Japanese occupied island, with a large radio transmitter, hundred of miles away. The squadron continued its flight plane and flew south to Mariveles and then returned to Clark Field. When the planes landed, it was too late to do anything that day.

The next day, another squadron was sent to the area and found that the buoys had been picked up. A fishing boat with a tarp covering its deck was seen making its way toward shore. Since communications between the Air Corps and the Navy were poor, the boat escaped. It was at that time the decision was made to build up the American military presence in the Philippines

“According to War Department records, you have been designated as the emergency addressee if Corporal Raymond J. Graham, 35,102,133, who, according to the latest information available, was serving in the  Philippine Islands at the time of the final surrender.

– 1 June 1942 – POWs formed detachments of 100 men
– POWs marched out the gate and marched toward Capas
– Filipino people gave POWs small bundles of food
– the guards did not stop them
– At Capas, the POWs were put into steel boxcars and rode them to Manila
– the train stopped at Calumpit and switched onto the line to Cabanatuan
– POWs disembarked the train at 6:00 P.M. and put into a schoolyard
– fed rice and onion soup
– Cabanatuan #1
– original name – Camp Panagaian
– Philippine Army Base built for 91st Philippine Army Division
– put into use by the Japanese as a POW camp
– actually three camps
– Camp 1: POWs from Camp O’Donnell sent there in an attempt to lower the death rate
– Camp 2: two miles away
– all POWs moved from there because of a lack of water
– later used for Naval POWs
– Camp 3: six miles from Camp 2
– POWs from Corregidor and from hospitals sent there
– POWs from Camps 1 & 3 consolidated into one camp
– “Blood Brother” rule implemented
– if one POW in the group of 10 escaped, the other nine would be killed
– POWs patrolled fence to prevent escapes
– Barracks:
– each barracks held 50 men
– often held between 60 and 120 men
– slept on bamboo slats without mattresses, covers, and mosquito netting
– diseases spread easily
– no showers
– Morning Roll Call:
– stood at attention
– frequently beaten over their heads for no reason
– when POWs lined up for roll call, it was a common practice for Japanese guards, after the POWs lined up, to kick the POWs in their shins with their
hobnailed boots because they didn’t like the way the POWs looked
– Work Details:
– Work Day: 7:00 A.M. to 5:00 P.M.
– work details sent out to cut wood for POW kitchens, plant rice, and farm
– they also were frequently hit with a pick handle, for no reason, as they counted off
– POWs on the rice planting detail were punished by having their faces pushed into the mud and stepped on
– the POWs had to go into a shed to get the tools, as they came out, they were hit on their heads
– if the guards on the detail decided the POW wasn’t doing what he should be doing, he was beaten
– many POWs on details were able to smuggle in medicine, food, and tobacco into the camp
– to prevent escapes, the POWs set up patrols along the camp’s fence
– men who attempted to escape and caught were executed after being beaten
– the other POWs were forced to watch the beatings
– daily POW meal – 16 ounces of cooked rice, 4 ounces of vegetable oil, sweet potato or corn
– most of the food the POWs grew went to the Japanese
– Camp Hospital:
– 30 Wards
– each ward could hold 40 men
– frequently had 100 men in each
– two tiers of bunks
– sickest POWs on the bottom tier
– each POW had a 2 foot by 6-foot area to lie in
– Zero Ward
– given the name, because it had been missed when counting wards
– became ward where those who were going to die were sent
– fenced off from other wards
– Japanese guards would not go near it
– POWs sent there had little to no chance of surviving
– medical staff had little to no medicine to treat sick
– many deaths from disease caused by malnutrition
Died:
– Friday – 3 July 1942 – dysentery
– Approximate time of death – 10:30 PM
Buried:
– Cabanatuan Camp Cemetery
– In July 1942, the family received a second letter. The following is an excerpt from it.

“The last report of casualties received by the War Department from the Philippines arrived early in the morning of May 6. Through this date, Corporal Raymond J. Graham had not been reported as a casualty. The War Department will consider the persons serving in the Philippine Islands as “missing in action” from the date of the surrender of Corregidor, May 7, until definite information to the contrary is received.

– it is not known when his parents were told had died
Reburied:
– Jefferson Barracks National Cemetery – St. Louis – 17 February 1950
– Section: 78 Graves: 1004, 1005 1006
– Raymond shares his grave with T/5 Kent W. Hughes Jr. of A Company and Pvt. Edward G. Wills of the 192nd.
– the site was selected because the majority of families would have approximately the same distance to travel to visit the grave 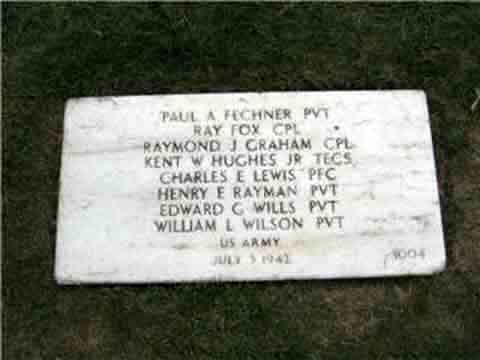