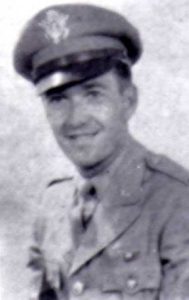 2nd Lt. James Lowell O’Neal
Born: 17 May 1918 – West Frankfort, Illinois
Parents: Charles & Anna O’Neal
Siblings: 2 sisters, 1 brother
Home:
– 212 South Eleventh Avenue – Maywood, Illinois
– his family moved to Proviso Township in 1926
Education:
– Washington Grade School, Maywood, Illinois
– Proviso Township High School
– Class of 1936
Married: Margaret O’Neal
Residence: 800 South Ninth Avenue – Maywood, Illinois
Occupation:
– Chief Payroll Clerk – American Can Company – Maywood, Illinois
Selective Service Registration: 16 October 1940
Contact Person: Anna O’Neal – mother
Enlisted:
– U.S. Army Air Corps
– 15 April 1942
– attended Officer Candidate School
Serial Number: O&699844
Training:
– Brooks Field, Texas
– Waco Field, Ohio
Unit: 374th Bomb Squadron, 308th Bomb Group (Heavy)
Stationed:
– Chengkung, China – 20 March 1943
– replacement
– a member of the crew of Major Horace E. “Stump” Carswell Jr.’s plane
Plane: B-24 Liberator
Engagements:
– numerous missions over China and Japan
– 16 October 1944 – planes sunk a heavy cruiser and a destroyer
Killed in Action:
– 26 October 1944
– His plane was damaged by Japanese fire and two its engines were shot out.  Carswell and O’Neal were attempting to nurse the plane home on its two good engines. The reason was that the parachute of the bombardier, 2nd Lt. Walter Hiller had been hit by flak and was useless so he couldn’t jump.  At some point, one of the two engines that were still running died. The other eight members of the crew bailed out. The last man out, Sgt. Carlton S. Schnepf, saw Hiller kneeling on the flight deck with his ruined parachute between Carswell and O’Neal.
Schnepf stated, “Carswell and O’Neal were just sitting there looking straight ahead. They knew the others were bailing out, but they made no attempt to stop them. They knew about Hiller’s chute. They were still trying to ride her in. Then the No. 2 engine sputtered and I jumped.” The No 2 engine was the last engine.
The plane hit a mountainside and burst into flames about 500 yards from where Schnepf landed.
Buried:
– National Memorial Cemetery of the Pacific, Hawaii
– Plot: Q Grave: 154
Medals:
– Air Medal / Oak Leaf Cluster
– Distinguished Flying Cross
– Purple Heart
– Silver Star
– 16 January 1946 – His wife received his Silver Star for gallantry in a special ceremony at their home. The citation read:

“For gallantry in action. He participated in an attack on a mixed convoy of 14 naval and merchant vessels in the South China Sea the night of 26 October 1944, flying as co-pilot of a heavy bombardment type aircraft. Although heavy anti-aircraft fire was encountered, two bombing runs were made over the convoy, and a tanker was probably sunk from the action. During the second run, the plane was seriously damaged by enemy fire. Two of the engines were put out of operation and a third engine was damaged. Other damage resulted to the aircraft and three of the crew were injured. Lt. O’Neal assisted the pilot in flying the aircraft to the coast, where the crew was ordered to jump from the plane. One of the crew members discovered that his parachute had been damaged by flak fragments and that he could not leave the plane. After the other crew members had parachuted from the plane, Lt. O’Neal remained with the senior pilot and the other crew member who was unable to jump, attempting to fly the crippled bomber to a landing position. However, the plane crashed and Lt. O’Neal was killed. The gallantry and courage that he exhibited reflect upon himself and the army air forces.” 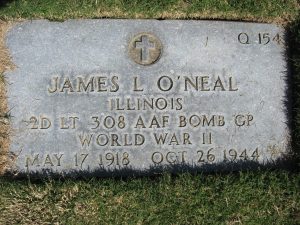