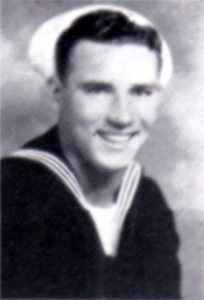 MM1/c Raymond Jennings Smith
Born: 1 January 1914 – Kankakee, Illinois
Parents: Fred & Laura Jennings
– Fred was his step-father
Siblings: 1 sister
– He used Jennings as his last name, but Smith was his last name on his birth certificate and he was required to use it in the Navy
Home:
– 611 South Seventh Avenue, Maywood, Illinois
– the family moved to Maywood when he was eight from Kankakee, Illinois
Nickname: “Bus”
Education:
– Emerson School
– Proviso Township High School
– Class of 1932
Enlisted:
– 3 April 1939
– used his step-father’s last name, Jennings, on his high school records
– Navy required that he use the last name that appeared on his birth certificate- served in Navy as “Raymond Jennings Smith”
Serial Number: 3808344
Rank: Machinist Mate Second Class
Ships:
– U.S.S. Chicago
– U.S.S. San Francisco – 8 April 1939
– U.S.S. Pope – 31 March 1941
Engagements:
– Battle of Balikpapan, Borneo
– Battle of Badung Strait, Bali
– Battle of Lombok Straits
– At the Battle of the Java Sea, HMS Exeter suffered torpedo damage
– The Pope was assigned as an escort for HMS Exeter to Ceylon, India – 29 February 1942
– The Pope did not take part in battle because of problems with its freshwater system
– HMS Encounter was also given this duty – 28 February 1942
– Exeter needed repairs from torpedo damage
– 1 March 1942 – three ships found themselves in the midst of a 13 ship Japanese convoy
– Both the Encounter and Exeter were sunk
– The Pope attempted to escape
– hit by bombs from Japanese planes the Pope began to take on water
– Bus was thrown into the sea when the ship was hit
– remained in the water for three days until picked up by the Japanese
– the crew attempted to save the Pope, but the ship was taking on water faster than they could pump it out
– the crew abandoned ship as she sank
Prisoner of War:
– 2 March 1942
– Japanese Destroyer Ikazuchi picks up survivors of Pope and Encounter
– Makassar POW Camp, Dutch East Indies
Died:
– 28 April 1945
– prison hospital – Makassar, Dutch East Indies – beriberi and malaria
Buried:
– Mount Emblem Cemetery – Elmhurst, Illinois
– Section: J Lot: 541 Grave: 3
Promoted: Posthumously to Machinist Mate First Class 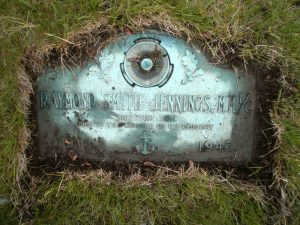