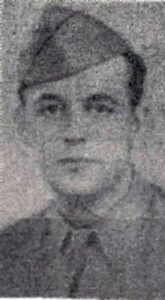 Sgt. Harry E. McGrath Jr.
Born: 1920
Parents: Mr. & Mrs. Harry E. McGrath Sr.
Home: 815 North 15th Avenue, Melrose Park, Illinois.
Education: Class of 1938 – Proviso Township High School
Wife: Annette
Residence: 4207 West Hirsch Street, Chicago, Illinois
Inducted: Not Known
– U.S. Army Air Corps
– Training: machine-gunner
– Army Serial Number: 36686684
Unit: 500th Bomb Group, 73rd Bomb Wing
Plane: Z-31
– Top Gunner
Missions:
– plane had completed 9 bombing mission
– 10th bombing mission was on Tokyo
– the plane was hit by flak
– only Harry and one other crew member, Sgt. Melvin Johnston, survived
Prisoner of War:
– captured by Japanese civilians who treated him relatively well
– turned over to Kempei-Tai
– this was the Japanese military police
POW Camps:
– Tokyo POW Interrogation Center
– ran by Japanese Tempei-Tai
– POWs were repeatedly beaten in an attempt to get information from them
– he described his treatment, “They beat me with clubs, swords, bayonets, and bamboo poles.”
– he had a wound from flak in his leg that the Japanese refused to treat
– the wound later healed on its own
– he was put in solitary confinement until April 3, 1945
– the Japanese took away his shoes and socks and he spent the winter without them in a former stable
– Tokyo Main Camp
– the camp was also known as Omori
– description of camp life
– the camp was located on a man-made island built by POWs
– held the “special prisoners”
– many of the POWs had been members of B-29 crews
– The POWs were special in the sense that they were given half rations and denied medical care
– The POWs were frequently punished by being made to stand at attention
– collective punishment because one POW broke a rule
– the guards would slap the POWs and beat them
– 31 August 1945
– parents learned he was alive
– Liberated:
– September 1945
– sent by ship to Okinawa
– Returned to the United States
– date not known