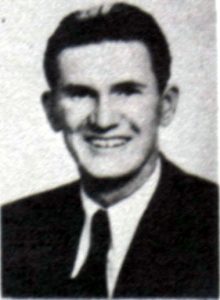 T/4 Robert G. Bales was born in 1920, in Carnegie, Oklahoma.  It is known he had a brother, Glen, and the two brothers moved to Salinas, California, together.

When they arrived at Fort Lews, the men found the weather to be constantly rainy.  Many came down with colds, so they were put in the base hospital to prevent it from spreading.

A day started with morning reveille at  6:00. During this time the men dressed, shaved, made their cots, policed the grounds around the barracks, and swept the floors of the barracks.  Next, at 6:30 they ate breakfast, and at 7:30 drilled until 11:30.  They ate lunch and drilled again from 1:00 P.M. until 4:30 P.M. Evening mess was after 5:00, and they were free after it.  The only men not off duty were the six men from each company assigned to guard duty for the night.  Those men took shifts during the night with two men on duty and four off.

There was a canteen near their barracks which they frequented and a movie theater on the base.  On weekends, many of them went into Tacoma or Olympia. During their time at the fort, many visited the site where the Narrows Bridge had stood before it collapsed into Puget Sound late in 1940. Some men attended church services on Sundays which were held at different times for the different denominations.

The theater in Area 12 was not finished. It was there that the tanks crews parked their tanks.  When it was finished all the tankers had to do is cross a road to get to their tanks.

Men who needed specialized training were sent to Ft. Knox, Kentucky, at various times to attend school.  There, they learned tank maintenance, radio operations, small vehicle maintenance, and other jobs.  During this time, rosters for the company were filled out with men from the home states of each company.

In the late summer of 1941, the 194th received orders for duty in the Philippines because of an event that happened during the summer. A squadron of American fighters was flying over Lingayen Gulf when one of the pilots noticed something odd. He took his plane down and identified a buoy in the water. He came upon more buoys that lined up, in a straight line for 30 miles to the northwest, in the direction of a Japanese occupied island, with a large radio transmitter, hundreds of miles away. The squadron continued its flight plane and flew south to Mariveles and then returned to Clark Field. By the time the planes landed, it was too late to do anything that day.

The next day, another squadron was sent to the area but the buoys had been picked up by a fishing boat which was seen making its way to shore. Since communication between the air corp and Navy was poor, the ship escaped.  It was at that time the decision was made to build up the American military presence in the Philippines.

In September 1941, the 194th, minus B Company, was ordered to San Francisco, California, for transport to the Philippine Islands. Arriving by train at 7:30 A.M., at Ft. Mason, north of San Francisco, on September 5. The company was ferried, on the U. S.A.T. General Frank M. Coxe, to Ft. McDowell on Angel Island, where they received physicals and inoculations from the battalion’s medical detachment.  Those men found to have medical issues were replaced.

The tankers boarded the S.S. President Calvin Coolidge on September 8th at 3:00 P.M. and sailed at 9:00 P.M. for the Philippine Islands. To get the tanks to fit in the ship’s holds, the turrets had serial numbers spray painted on them and were removed from the tanks. They arrived at Honolulu, Hawaii, on Saturday, September 13 at 7:00 A.M., and most of the soldiers were allowed off the ship to see the island but had to be back on board before the ship sailed at 5:00 P.M.

After leaving Hawaii, the ship took a southerly route away from the main shipping lanes. It was at this time that it was joined by the U.S.S. Astoria, a heavy cruiser, that was its escort. During this part of the trip, on several occasions, smoke was seen on the horizon, and the Astoria took off in the direction of the smoke. Each time it was found that the smoke was from a ship belonging to a friendly country.

The Coolidge entered Manila Bay at 7:00 A.M., on September 26, and reached Manila several hours later. The soldiers disembarked at 3:00 P.M., and were driven on buses to Clark Field. The maintenance section of the battalion and members of 17th Ordnance remained at the dock to unload the battalion’s tanks and reattach the turrets.

The battalion rode buses to Fort Stotsenburg and taken to an area between the fort and Clark Field, where they were housed in tents since the barracks for them had not been completed. They were met by Colonel Edward P. King, commanding officer of the fort who made sure they had what they needed. On November 15, they moved into their barracks. Robert and the other members of the battalion spent their time in the Philippines by training and readying their equipment for use in maneuvers.

The morning of December 8, 1941, the tankers heard that the Japanese had bombed Pearl Harbor ten hours earlier. The tank company was ordered to the perimeter of Clark Airfield to guard against Japanese paratroopers. All morning long, the sky was filled with American planes. At 12:30, the planes landed and the pilots went to lunch parking their planes, outside their mess hall, in a straight line so they could be refueled.

After the attack, the 194th was ordered to Mabalacat a few miles from Clark Field. The battalion remained in the area until December 12, when they were ordered to Fort McKinley. The tankers were now part of the South Luzon Force and positioned south of Manila. It was at this time that C Company was ordered to support forces in southern Luzon. The company proceeded through Manila. Since they had no air cover, most of their movements were at night. As they moved, they noticed lights blinking or flares being shot into the air. They arrived at the Tagaytay Ridge and spent time there attempting to catch fifth columnists.

They remained in the area until December 24, when they moved over the Taal Road to San Tomas and bivouacked near San Paolo and assisted in operations in the Pagbilao-Lucban Area supporting the Philippine Army. One of the most dangerous things the tanks did was cross bridges with a ten-ton weight limit. Each tank weighed 14 tons, so they crossed the bridges one tank at a time.

The next day, December 26, Lt. Needham’s platoon of tanks received orders to proceed to Lucban because the Japanese troops were in the area. When the tankers got to the Lucban area, an American officer ordered the tanks up Route 3 to see how strong the Japanese forces were in the area. This road was, in reality, a jungle trail. Part of the reason for the tanks being called to do reconnaissance was that the American command wanted to impress the Filipino troops. Lt. Needham protested this move since no reconnaissance had been made of the area. Needham believed that the tankers could be entering a trap. In spite of his protests, he was ordered to proceed up the road.

Being a member of Needham’s tank crew meant that Robert’s tank was the first tank in the column. As they went down the trail, the trail made a sharp turn. His tank made the turn and was hit by a shell from a Japanese 47-millimeter antitank gun. The shell came through the front hatch and killed Bale’s immediately. The tank swerved off the road into a ditch. The explosion caused the front hatches of the tank to be blown off. This left the surviving crew members exposed to enemy fire. As the surviving tank crew members attempted to escape the tank, they were machine-gunned by the Japanese. T/4 Robert G. Bales was Killed in Action outside of Lucban on Friday, December 26, 1941.

After the war, a United States Recovery Team was sent to the Barrio of Piis in the Philippine Islands to recover remains on July 5, 1945. The local residents claimed that the remains of two Americans were still inside an American tank which had been destroyed during a tank battle in December 1941. The Filipinos took the Americans to the rice paddy where the tank was and remains of one man were found in the tank driver’s side of the tank, while the remains of another man were found in the assistant tank driver’s position. The residents stated that they did not bury the soldiers but filled the tank with dirt. The remains of both men were recovered and buried at Batangas as Unknowns X-7 and X-8.

The Filipinos also explained the remains of the other tank crew members were outside of the tank and dragged away by dogs. In addition, the tank number FXN-314 was identified.

Since his final resting place is unknown, T/4 Robert G. Bales’ name appears on the Tablets of the Missing at the American Military Cemetery at Manila.