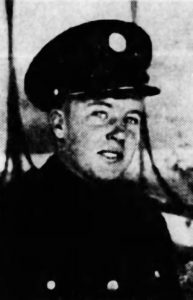 PFC Crate Davis Anderson was born on August 26, 1921, in Yellow Creek, North Carolina, to Edmund Anderson and Zena Hall-Anderson. With his sister, he grew up in Yellow Creek. When he was eight, his mother died. He left school after completing eighth grade and went to work as a farmhand.

Crate enlisted in the U.S. Army and was inducted on September 20, 1940, at Fort McPherson, North Carolina. He was sent to Ft. Benning, Georgia, for basic training.  During week 1, the soldiers did infantry drilling; week 2, manual arms and marching to music; week 3, machine gun training; week 4, was pistol usage; week 5, M1 rifle firing; week 6, was training with gas masks, gas attacks, pitching tents, and hikes; week 7, 8, 9, and 10 was spent learning the weapons, firing each one, learning the parts of the weapons and their functions, field stripping and caring for weapons, and the cleaning of weapons.  It is known that he qualified as a tank mechanic. After completing basic training, he was assigned to the 753rd Tank Battalion.

In the late summer of 1941, the 753rd was ordered to Camp Polk, Louisiana, but did not take part in the maneuvers that were going on at the time. After the maneuvers, the 192nd Tank Battalion was ordered to Camp Polk, Louisiana, instead of returning to Ft. Knox. Two weeks later, on the side of a hill, the members of the battalion were informed they were being sent overseas. Men 29 years old or older, were allowed to resign from federal service. Replacements for these men were sought from the 753rd with men either volunteering or having their names drawn. The battalion also received the tanks and half-tracks of the 753rd.

The decision for this move – which had been made in August 1941 – was the result of an event that took place in the summer of 1941. A squadron of American fighters was flying over Lingayen Gulf, in the Philippines, when one of the pilots, who was flying at a lower altitude, noticed something odd. He took his plane down and identified a flagged buoy in the water and saw another in the distance. He came upon more buoys that lined up, in a straight line for 30 miles to the northwest, in the direction of a Japanese occupied island which was hundreds of miles away. The island had a large radio transmitter. The squadron continued its flight plan south to Mariveles and returned to Clark Field. When the planes landed, it was too late to do anything that day.

Over different train routes, the companies were sent to San Francisco, California, where they were ferried, by the U.S.A.T. General Frank M. Coxe, to Ft. McDowell on Angel Island. On the island, they were given physicals by the battalion’s medical detachment and men found with minor medical conditions were held on the island and scheduled to rejoin the battalion at a later date. Other men were simply replaced.

The 192nd was boarded onto the U.S.A.T. Gen. Hugh L. Scott and sailed on Monday, October 27. During this part of the trip, many tankers had seasickness, but once they recovered they spent much of the time training in breaking down machine guns, cleaning weapons, and doing KP. They arrived at Honolulu, Hawaii, on Sunday, November 2 and had a two-day layover, so the soldiers were given shore leave so they could see the island.

On Wednesday, November 5, the ship sailed for Guam but took a southerly route away from the main shipping lanes. It was at this time it was joined by, the heavy cruiser, the U.S.S. Louisville and, the transport, S.S. President Calvin Coolidge. Sunday night, November 9, the soldiers went to bed and when they awoke the next morning, it was Tuesday, November 11. During the night, while they slept, the ships had crossed the International Dateline. It was about this time that the convoy stopped at Wake Island to drop off B-17 ground crews.

On Saturday, November 15, smoke from an unknown ship was seen on the horizon. The Louisville revved up its engines, its bow came out of the water, and it shot off in the direction of the smoke. It turned out the smoke was from a ship that belonged to a friendly country, but two other intercepted ships were Japanese freighters carrying scrap metal to Japan.

When they arrived at Guam on Sunday, November 16, the ships took on water, bananas, coconuts, and vegetables before sailing for Manila the next day. At one point, the ships passed an island at night and did so in total blackout. This for many of the soldiers was a sign that they were being sent into harm’s way.

The ships entered Manila Bay, at 8:00 A.M., on Thursday, November 20, and docked at Pier 7 later that morning. At 3:00 P.M., most of the soldiers were taken by bus to Ft. Stotsenburg. Those who drove trucks drove them to the fort, while the maintenance section remained behind at the pier to unload the tanks.

At the fort, they were greeted by Colonel Edward P. King, who apologized they had to live in tents along the main road between the fort and Clark Airfield. He made sure that they had what they needed and received Thanksgiving Dinner – a stew thrown into their mess kits – before he went to have his own dinner. Ironically, November 20 was the date that the National Guard members of the battalion had expected to be released from federal service.

The members of the battalion pitched the ragged World War I tents in an open field halfway between the Clark Field Administration Building and Fort Stotsenburg. They were set up in two rows and five men were assigned to each tent. There were two supply tents and meals were provided by food trucks stationed at the end of the rows of tents.

For the next seventeen days, the tankers spent much of their time removing cosmoline from their weapons which had prevented rust from forming on the guns while the battalion was at sea. They also spent a large amount of time loading ammunition belts. The plan was for them, with the 194th Tank Battalion, to take part in maneuvers.

After arriving in the Philippines, the process was begun to transfer D Company to the 194th Tank Battalion, which had left for the Philippines minus one B Company which was sent to Alaska while the remaining companies, of the battalion, were sent to the Philippines. The medical clerk for the192nd spent weeks organizing records to be handed over to the 194th.

On December 1, the tank battalions were ordered to the perimeter of Clark Field to guard against Japanese paratroopers. The 194th, with D Company, was assigned northern part of the airfield and the 192nd guarded the southern half. Two members of each tank and half-track crew remained with their vehicles at all times and received their meals from food trucks.

On the morning of December 8, 1941, just hours after the Japanese attack on Pearl Harbor, the company was brought up to full strength at the perimeter of Clark Field. All morning long, the sky was filled with American planes. At noon, the planes landed to be refueled and the pilots went to lunch. The planes were parked in a straight line outside the pilots’ mess hall.

At 12:45, two formations, totaling 54 planes, approached the airfield from the north. When bombs began exploding on the runways, the tankers knew that planes were Japanese. Being that their tanks could not fight planes, they watched as the Japanese destroyed the Army Air Corps.

When the Japanese were finished, there was not much left of the airfield. The soldiers watched as the dead, the dying, and the wounded were hauled to the hospital on bomb racks, trucks, and anything else, that could carry the wounded, was in use. When the hospital filled, they watched the medics place the wounded under the building. Many of these men had their arms and legs missing. That night, most men slept under their tanks since it was safer than sleeping in their tents. They had no idea that they had slept their last night in a bed.

One of the results of the attack was that the transfer of D Company, to the 194th, was never completed. The company retained its designation of being part of the 192nd for both the Battle of Luzon and the Battle of Bataan.

The 194th, with D Company, was moved, the night of the 12th, to an area south of San Fernando near the Calumpit Bridge arriving there at 6:00 A.M. On December 13, the tankers were moved 80 kilometers from Clark Field to do reconnaissance and to guard beaches. On the 15th, the battalion received 15 Bren gun carriers but turned some over to the 26th Cavalry, Philippine Scouts. These were used to test the ground to see if it could support tanks.

The tank battalions were sent to the area around the Lingayen Gulf. The company was near a mountain, so many of the tankers climber to the top. On the mountain, they found troops, ammunition, guns but were just sitting there watching the Japanese ships in the gulf. They had received orders not to fire.

On December 22, the companies were operating north of the Agno River and after the main bridge was bombed, on December 24/25, it made an end run to get south of the river and not be trapped by the Japanese. The tanks held the south bank of the river from west of Carmen to the Carmen-Akcaka-Bautista Road with the 192nd holding the bank east of Carmen to Tayug (northeast of San Quintin).

Christmas Day, the tankers spent in a coconut grove. As it turned out, the coconuts were all they had to eat. From Christmas on, both day and night, all the tankers did was cover retreats of different infantry units.

On December 26, D Company was covering a withdrawal at the Agno River. The tankers were ordered to hold the line with 25 tanks and half-tracks. Holding the line, the tanks came under a barrage from Japanese artillery. It was during the shelling that Crate was wounded.

Kenneth Hourigan put Crate on his tank and attempted to get him to an aid station. While doing this, his tank ran into a car full of Filipinos who promised to get Crate first aid, so he turned Crate over to them. Whether or not this was done is not known. Hourigan stated that he saw the car pass his tank a couple of times. He didn’t know it at the time, but the bridges that the company was between had been destroyed. Hourigan stated that he never knew what happened to Crate.

PFC. Crate D. Anderson was reported Missing in Action and was reported to have died on Friday, December 26, 1941. It is not known where he was buried, but after the war, his remains were positively identified and returned to the United States at the request of his family. 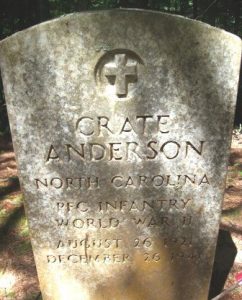