Since the Bataan Commemorative Research Project Website has been on-line, I have been asked repeatedly, in e-mails, in person, and for newspaper and magazine articles, why the website was created. To answer this question, I will attempt to tell the story as simply and briefly as possible.

During the 1998 – 1999 school year, former Proviso East teacher, Ian Smith and I were being paid by the high school district to provide security, after school, in the school. One evening, Ian said that he had a friend whose uncle had attended Proviso East in the late 1930s. It should be mentioned that, at that time, the school was known as Proviso Township High School and served the students of ten western suburbs of Chicago.

At the north end of Proviso East, is a courtyard that was dedicated, in 1949, to the former students of the school who had died in World War I and World War II. The names of one former faculty member, 189 former students who died in World War II, and one who survived the war, are listed on the tablets. Ian had promised his friend that, if the courtyard was ever unlocked, he would make a rubbing of the uncle’s name which is on one of the four tablets that are mounted, two each, on the east and west walls of the courtyard.

One evening, to our amazement, the courtyard was open and we went in and made the rubbing of the name on a sheet of paper. As we read the names, on the tablets, of the WWII dead, we both commented on how many former students, who were members of the class of 1938, had died in WWII. Ian took this to heart and invested the time to find out why so many members of this particular class had died in the war.

What he soon discovered was that from 1910 until the early 1950s an Illinois National Guard Armory was located across from the high school on Madison Street. Doing some digging, he learned that the armory had housed a tank company. He also quickly discovered that many of the members of this tank company were former Proviso students who had joined the National Guard while they were in high school. These Guardsmen, many of whom ended up on the Bataan Death March on April 9, 1942, were the inspiration for the website. 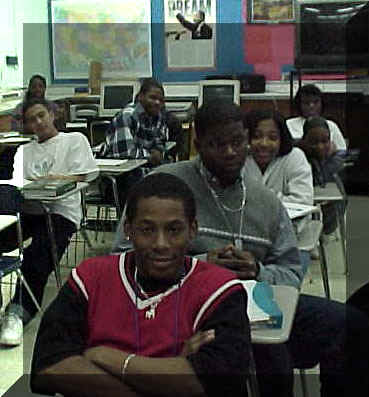 In the fall of the 1999 – 2000 school year, Ian approached, former Proviso East teacher, Renee Johansson, and myself about creating a website on the members of B Company, 192nd Tank Battalion. This was the tank company that had been housed in the old armory. Renee would be the webmaster, and I became the chief researcher. Ian was our spiritual leader. The project had to be cross-curricula so that we would qualify for a grant from the Des Plaines Valley Region, (a consortium of schools that provides educational opportunities for students), for computers, printers, and scanners for each of our classrooms for the students to use. My being a English teacher made the project cross-curricular.

We went online on March 10, 2000, with one clear goal. That was to tell the story of the members of B Company. The reality was that, at the time, we were attempting to tell a fifty-six-year-old story in which many of the key people had died. Renee selected a background for the website that resembled an old newspaper. This background was used until quite recently. From old newspapers and old magazines, we began to collect the stories. We also interviewed the surviving members of the company, the families of those who died as Prisoners of War, and the families of those who had died during the many years that had passed. Our students also began to learn the skills they needed to create webpages.

A few months after the site went online, I suggested to Ian that since we had the rosters of the other companies of the battalion, that we should add them to the site. Doing this seemed to open the floodgates. We began to receive emails from the families of the members of these companies. Many were asking us for information on their relatives. They were also willing to send us photos and other items that they had. Most of the families simply wanted to tell us “Thank You” for remembering their relatives. The emails came from as close as Forest Park, a suburb of Chicago just to the east of Proviso, to as far away as New Zealand, Taiwan, Hong Kong, Germany, and the Netherlands.

During the many school years that have passed, the site has evolved into something none of us could have imagined. Over the years, we have helped families of the other two units that made up the Provisional Tank Group. Because of this, we added the names of the members of 17th Ordnance and the 194th Tank Battalion to the site. We have also helped families of men who fought on Bataan but were not members of the tank group. Although our primary focus still is to tell the story of the 192nd Tank Battalion, we also added pages to honor the former students of Proviso Township High School who died during World War II and Viet Nam. If the information is available, I would like to add the names of former Proviso students who died in the Korean War.

We have also gone through changes in personnel over the years. Renee left the school district in 2002 and was replaced by two social studies teachers, Cathy McCaffrey – who left in 2004 – and Trish Howard, who was transferred to Proviso Math & Science Academy in 2012 and retired in 2017. Ian left the school district in 2007, leaving the website in my care. Finally, I retired on May 31, 2017, and took the website with me, since there was little to no interest, at the high school, to continue it. In addition, it has also been on a server owned by Steve Gibson – whose dad graduated from the high school and was a member of the 192nd Tank Battalion – for the last four years.

I promise that I will continue to attempt to tell the stories of these men who fought so hard, for so long, with so little.