Arisan Maru was a 6,886 GRT Type 2A freighter constructed in 1944 during World War II and was one of Imperial Japan‘s hell ships. The vessel, named for a mountain on Formosa, was initially used as a troop transport. The vessel was then turned over for use for the transportation of prisoners of war (POWs) from the Philippines to Manchuria, China or Japan. On October 24, 1944 the ship was torpedoed by an American submarine and sank. Of the 1,781 POWs aboard, all of them escaped the sinking ship but were not rescued by the Japanese. In the end, only nine of the prisoners survived the sinking. 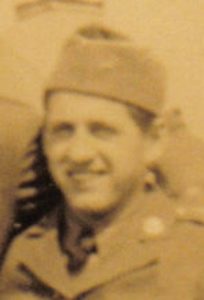 PFC George Zimmerman was born in Momrock, Yugoslavia on January 21, 1915, to Philip Zimmerman and Magdalene Elder-Zimmerman. He was the youngest of the couple’s